Organic Marble gave an answer to my question "Procedures if there was a shuttle decompression in the vacuum of space," precisely as I worded the request.

The wording of my question was imprecise so what I was interested in knowing could not addressed.

In laymen's terms what are the first specific actions an astronaut would take after identifying a potentially catastrophic decompression in either the ISS or shuttle while it is in orbit?

The major difference between the response to a cabin leak in the shuttle and station is that, if the leak cannot be stopped, the shuttle would terminate its mission and enter, and the station (or parts of it) would be abandoned. Some information about leak isolation procedures on the station can be found in the answers to Can they isolate individual modules on the ISS?

I will briefly summarize the procedures for shuttle. Some shuttle systems knowledge background is required to fully grasp the rationale. For now, accept that the limiting consumable on shuttle for leaks was always N2, and that the cabin atmosphere must be maintained at or above 8 psi for the purpose of keeping acceptable temperatures on air-cooled equipment in the cabin. For background on the Orbiter cabin pressurization system, refer to Space shuttle cabin atmosphere system

I will walk through the procedure for the case of an unisolatable leak in an Orbiter which is not docked. If the Orbiter was docked, steps 1 and 2 would execute procedures to determine if the leak was in the station or the Orbiter.

Step 3 shuts off the system used to maintain the cabin pressure. If the rate of change of cabin pressure is at or above zero after this, the high flow alarm was not caused by a leak. Go fix the problem in that system (step 4).

Steps 5 - 19 attempt to find and stop the leak. Various valves in the cabin, the toilet, the hatch, etc. are checked.

After all leak sources have been checked, if the rate of change of cabin pressure is at or above zero, the leak has been stopped. Reconfigure the systems. If it is not, the leak is unisolatable. "PREPARE FOR DEORBIT"

Steps 23-30 reopens valves to the Spacehab and/or airlock to utilize the atmosphere present in those volumes (they have already been excluded as causes of the leak).

The next step is to determine how long the Orbiter can survive at the current leak rate. The definition of Orbiter survival is the cabin pressure remaining at or above 8 psi. This time is based on two sub-times: 1) The time it takes the cabin to leak down to 8 psi, at which time the emergency cabin repressurization system kicks in 2) The time it takes the emergency cabin repressurization system to expend all the stored N2 while maintaining 8 psi in the cabin. These times are calculated by nomographs in the procedure or by an application on a laptop PC. The input to this process is the "Equivalent dp/dT" defined as the rate of decay of the cabin pressure if the cabin pressure was at 14.7 psi. The larger the dp/dt EQ, the larger the leak. The current cabin pressure and the amount of stored N2 determine the amount of gas available to feed the leak. 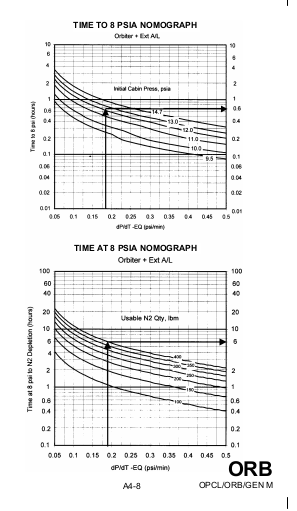 The Orbiter must be in the atmosphere before the survival time runs out. Hopefully at least an emergency runway can be reached if not one of the prime landing sites. If not the crew must bail out. That is the next decision the crew and mission control must make, when to do the deorbit burn and what to target for a landing.

The remainder of the procedure concerns itself with maintaining a livable cabin atmosphere as long as possible. Steps 34-38 are for a large leak. The crew must don the Launch and Entry suits and configure the Orbiter systems for this.

Steps 40-44 configure the Orbiter systems to flow as much O2 as possible into the cabin. The crew must manually manage the partial pressure of O2 to remain below flammibility limits using steps 45-50.

Once the cabin pressure reaches 8 psi, the emergency repressurization system kicks in. The crew executes steps 51-57 to configure the systems and then exits the procedure, to join the rest of the crew preparing for deorbit.

This is not a comprehensive answer as such, but rather an attempt to put information from @OrganicMarble answer and also information from this unofficial Russian webpage into consize "laymen's terms", as requested by OP, for ISS decompression.

There might be a confusion regarding what exactly OP means under "potentially catastrophic". In order to have decompression problem, first a "hole" must occur in the ISS. Regardless of the hole size, atmospheric pressure inside the station will start to drop, what happens next is automatic system would raise an alarm (to let the crew know of the problem) and would start blowing a gas from reserves into ISS internal atmosphere in order to compensate for the pressure loss.

So, the first specific team actions would be:

Not the answer you're looking for? Browse other questions tagged iss space-shuttle procedure emergency decompression or ask your own question.

4
Can they isolate individual modules on the ISS?
4
Space shuttle cabin atmosphere system
3
Procedures if there was a shuttle decompression in the vacuum of space

4
What is the “space grease” used to lubricate the ISS robotic arm? What are the material considerations for it?
3
Could DOD earth observation (i.e. spy) satellites have photographed the Columbia Orbiter on STS-107?
6
What were the space shuttle’s emergency procedures for an SRB or ET separation failure?
3
How to get ISS trajectory information after spaceflight.nasa.gov has been taken offline?
2
First Ham Radio contact from space; what frequency, what kind of antenna, and how did they route the coax out the window?