Is a ball of ice practical as reaction mass and forward shielding?

There have been several hard science fiction stories where sheets or a ball of ice is used on a spacecraft. The function is usually as forward shielding against dust and small debris. Is this practical at all?

Fuel costs aside, it seems the ice shield would wear away after a while and there would be no way to rebuild it. Would it make more sense to use something more easily rebuilt like ceramic plating?

There are other stories about using the same ice as reaction mass. I assume the atoms would be split for such a purpose as an "atomic rocket" per se. However you would also run out of ice after a while, assembly of ice seems more daunting than using some type of high atmosphere scoop on a gas giant. Am I off base with my assumptions?

Rockets are momentum machines. They spew gas out of a nozzle at high velocity causing the nozzle and the rocket attached to it to move in the opposite direction. Isaac Newton correctly defined the mathematics for this exchange of momentum in 1687. Conservation of momentum applied to a rocket was first done by Russian visionary and scientist Konstantin Tsiolkovsky in 1903. All our rockets are governed by Tsiolkovsky’s rocket equation.

This means that reaction mass that conventional rockets (chemical rockets, thermal rockets,...) need to carry with them, while necessary to achieve thrust ($\mathbf{T} = \frac{dm}{dt} {v}$) and with it movement in the opposite direction to their exhaust, directly following principles described in Newton's laws of motion, also increases their initial mass and with it impede total achievable $\Delta v$. And as you approach relativistic speeds, all that mass becomes heavier and requires even more energy to accelerate faster.

All this means that increasing rocket's mass by adding additional required systems or shielding mass to it directly lowers its performance. It will accelerate slower, and reach its destination later. As far as exposure to cosmic rays and solar high energy proton flux is concerned, radiation dose is governed by the duration of exposure, its intensity (proximity to its source), and a few other, more-or-less invariable factors we can't control with rocket systems alone, like our body density.

There is not much we can do to block the most energetic chargeless particles in cosmic rays (such as neutrinos, and if I remember correctly, we'd need many light-years thick block of led to block half of them). As for smaller eV radiation, short of reducing exposure time, there are ways to deflect most charged particles with a dipole magnetic field, and/or blocking lower energy mass particles by shielding mass, where water (or water ice) is fairly good at that (see another, also relevant answer).

So it makes perfect sense to decrease exposure time, accelerate fast away while in the inner Solar system (proximity to the Sun), decelerate even faster at your destination since the rocket is by then lighter, and shorten total trip time. So yes, reusing any rocket's mass for multiple purposes makes perfect sense, and even if that mass is a consumable, it would be required as reaction mass anyway, so why not use it as a shielding mass for biological shield as well? Since it's water, you'd likely use it for other purposes as well, such as a source of oxygen, potable water, coolant,... and you can recycle most of that, so there would always be at least some available and not all of it consumed as reaction mass.

However, unless that's required by the rocket's design, forward shield only makes sense if the source of the most of radiation you'd like to block is coming from in front of the rocket, meaning you're likely travelling at a significant fraction of the speed of light already (at which point a collision with a grain of dust might be catastrophic, due to $E_\text{k} =(m c^2)/(\sqrt{1 - v^2/c^2}) - mc^2$ with $E_\text{k}\approx\tfrac{1}{2} mv^2$ when $v$ is much smaller than $c$, see explanation here), are faster than harmful matter from behind you, and you're for some reason not concerned by the impacts orthogonal to your vector of travel, otherwise you'd likely want to shield the crew module all around, not merely from in front of the ship. Like for example in this Conceptual Design of Crew Exploration Lander for Asteroid Ceres and Saturn Moons Rhea and Iapetus (PDF): 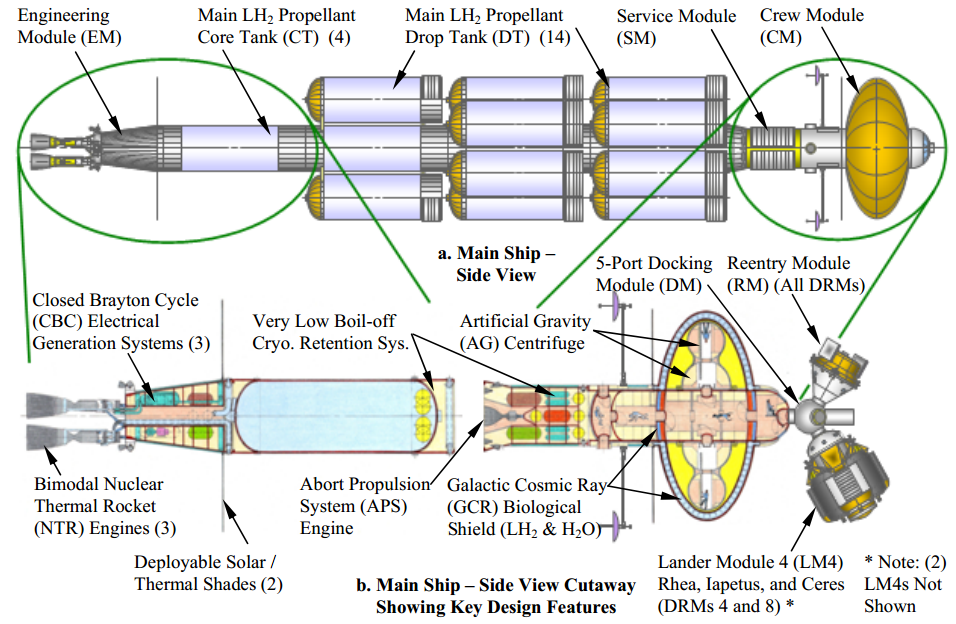 So TL;DR - It makes perfect sense to reuse as much of the vehicle's reaction mass for multiple purposes, including increasing protection from harmful radiation and impacting with smaller debris while in areas and at relative velocities where it's more likely to happen and total kinetic energy discharged on impact can be shielded against. It will also decrease total travel time, further lowering exposure time to harmful radiation. But solely forward shielding likely doesn't make much sense, if this bioshield mass could instead be distributed all around the crew module. As the vehicle increases velocity and if that on itself changes direction of harmful radiation and likelihood of impact at ram-facing side of the craft, then part of the threat mitigation could also be gradual use of bioshield mass from where it's less needed first.

Hydrogen and oxygen are abundant. See Abundance of Elements in the Universe. So water should be available in most star systems where a generation ship would visit. Water ice starts sublimating at a good rate at 90 Kelvin, but temperatures in the interstellar void should usually be well below that.

Ceramics might be a better choice for an ablation shield diving into a thick planetary atmosphere. But for a star ship traveling at .1 c through the interstellar medium, water ice might be the good choice.

Highly speculative as we're not doing interstellar trips in the near future (if ever).

If it's travel about our solar system you're talking about, I don't think a dust shield is needed.

Not the answer you're looking for? Browse other questions tagged propulsion crewed-spaceflight interstellar-travel water shielding or ask your own question.

34
How much power would a spacecraft's magnetic shield require?
25
What materials provide the best protection from cosmic radiation?
30
What thickness/depth of water would be required to provide radiation shielding in Earth orbit?
13
Is water on-board space-craft (such as ISS) rationed?

17
Radiation shielding magnetic or mass, which is more efficient?
7
Is the Oberth effect applicable to any speed change, or only to ejection of reaction mass?
5
Suitability of Hydrogenated Boron Nitride Nanotubes for structural and shielding elements of spacecraft
7
Using lower stage as reaction mass
3
Solar sail and debris shielding
4
ISS Destiny Module inner wall: thickness set by internal atmospheric pressure or by mass density needed for meteor shielding?