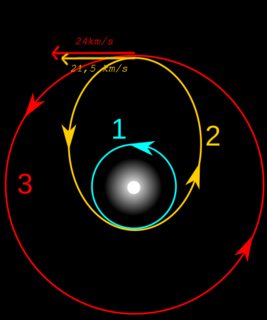 31
Why not travel to Mars in 2 months?
38
What uses would the Aldrin-Cycler have?
10
To what extent could a single Triton flyby slow down a direct Hohmann transfer to Neptune for NOI?
3
Could a small Mars Cycler be used for repeated sample and big data transfers?
6
Multiple Gravity Assist from Moon to reach Mars
6
Is Hohmann transfer the most frequent transfer orbit?
8
Fastest orbit transfer constrained by maximum g-force magnitude
5
Mars and back, staying only a few days
11
Does going to Mars take the same energy as making a rendezvous with something going to Mars?