Was the ship decompression scene in the movie Aliens realistic?

I was directed here from Sci-Fi SE to pose this question.

Towards the end of the Aliens (1986) movie, Ripley is forced to override the clearly marked "outer door" control having already opened the inner one with the resultant decompression and loose items being pulled out etc. This was to hopefully expel the Alien trapped under the machinery.

How realistic really is this effect? Would the instant decompression force not pull her clean out (without being physically fixed down, locking arms does not to me seem sufficient but I may be wrong) and it seemed to take a relatively long time to evacuate the air in the ship too, from memory it was still being exhausted when she closed the inner door again. 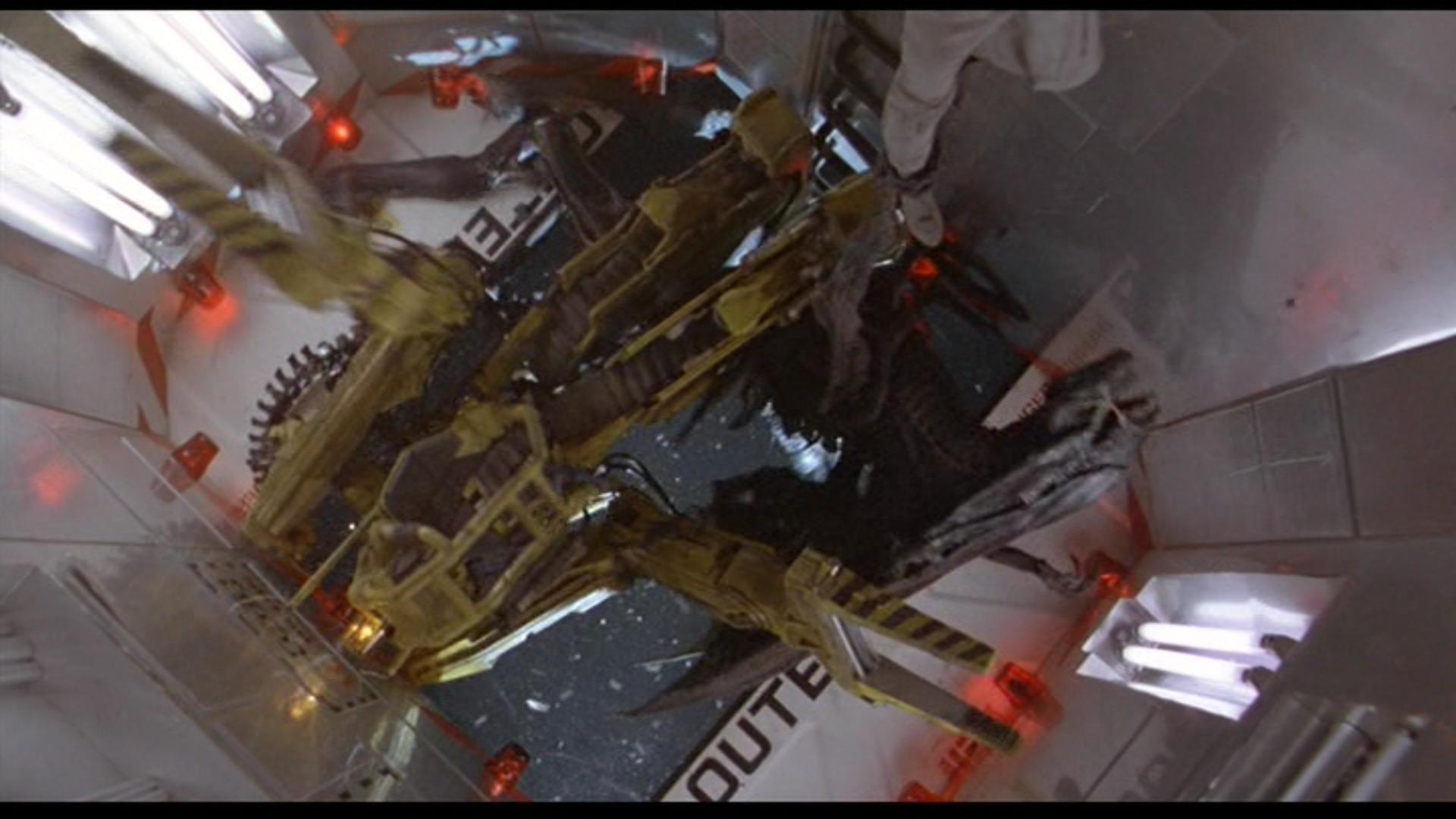 I did a quick extrapolation from Organic Marble's data (1.5" diameter hole = lose 1500 lbs of air per hour from 14.7 psi; flowrate proportional to the square root of the pressure differential) and my estimate of the hangar and hatch size in the scene (40x40x10m hangar; 3m square hatch). There's a lot of uncertainty here and the large opening might not produce the same choked flow that a small hole would, but my estimate says half the air is gone in 7 seconds. After 14 seconds about 15% of the air is left, and the effective altitude is ~12km, which this article suggests leaves no more than 12 seconds of useful consciousness -- Ripley's going to black out before the Alien Queen lets go.

In the scene from the film, the airlock is open for about 70 seconds. If the volume of the hangar was 10 times my estimate, e.g. something like 20m x 80m x 100m, half the air would still be left after 70 seconds, and the scene would be more plausible. I'm not quite bored enough to watch the other hangar scenes to make a better estimate of the hangar volume; it's also possible that some air source beyond the hangar (i.e. the rest of the Sulaco's interior, or tanked air) might be feeding into the hangar during this scene.

Would the instant decompression force not pull her clean out (without being physically fixed down, locking arms does not to me seem sufficient but I may be wrong)

If Ripley were blocking the airlock completely, the pressure differential across her body would amount to several tons and she'd be blown out instantly. However, hanging on the ladder, there's some air flowing into the space downstream of her, so the pressure differential isn't as extreme. As discussed in comments below, this force is still at least a few tons; as mighty as Ripley is, she wouldn’t be able to hold onto the ladder, let alone climb out.

As much as I love this movie, it's not very realistic.

Here are some cabin leak numbers for the shuttle Orbiter.

At an initial 14.7 psi cabin atmosphere, a 1.5 inch diameter round hole was projected to give an initial leak flowrate of greater than 1500 lbm / hour.

That would have been catastrophic for the shuttle with the cabin pressure dropping initially at over 2 psi/minute.

And using peterh-Reinstate Monica's hole size of 8 x 8 meters?! That hangar bay would be at vacuum in seconds.

(Source: used to leak the shuttle for a living (simulated only))

The outer door of the airlock should open inwards against the air pressure. But opening the door against the huge force of the pressure to the large area of the door is impossible.

If the door is opening with the air pressure, a manual or motorized unlocking would be possible only at a very low pressure inside the airlock. Opening of the door locks at normal air pressure by brute force would result in damages to the door and the locks. Rapid closing of the damaged door would be impossible.

Not the answer you're looking for? Browse other questions tagged vacuum airlock decompression or ask your own question.

6
How was the airlock for the ISS' minisat launchers installed?
2
Was there a measurable effect on gas concentration on the Moon during the Apollo missions?
3
Procedures if there was a shuttle decompression in the vacuum of space