What is the diameter of magnetopause 1.5 millions kilometers behind the Earth?

Earth has strong magnetic field, which changes concentration of charged particles from Sun near the planet. There is rather safe torus near the Earth (LEO non-polar orbits), and also there is long tail, in which activity of Sun emitted particles is reduced (in this picture Sun is at left side and Earth is in center) http://en.wikipedia.org/wiki/File:Magnetosphere_Levels.svg 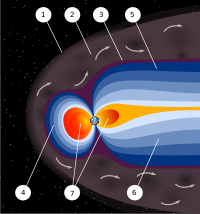 My question - what is geometry of magnetotail, if we check it 1.5 million kilometers away from Earth (at the line Sun-Earth-L2). What is estimated diameter of magnetopause or magnetotail here?

Will Earth provide extra protection from charged particles for the spacecraft hung exactly in L2 Lagrange point of the System Sun-Earth.

Will there substantial protection for the spacecraft orbiting around L2 at distance of 200,000 to 300,000 kilometers away from L2 (in the plane, perpendicular to the line Sun-Earth)

radiation lagrangian-points the-sun
Share
Improve this question
edited May 20 '14 at 15:06

Some interesting info from ISEE-3 via eoPortal: https://directory.eoportal.org/web/eoportal/satellite-missions/i/isee from the figure 12 "ISEE-3 spacecraft trajectory overview from halo orbit to geomagnetic tail" 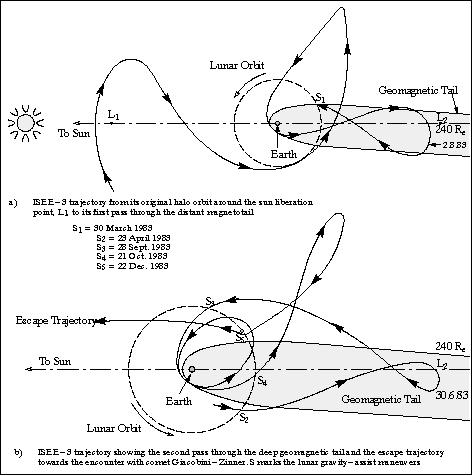 If the tail is depicted correctly, its diameter near L2 is ~1.5 times less then Moon's orbit diameter (0.77 mln km), or near 0.5 million kilometers.

The The Global Magnetosphere page from "Earth's Magnetosheath, Magnetopause and Magnetosphere" lecture by Iver Cairns, 1999 has interesting picture "Figure 14.7: Noon-midnight cross section of the magnetosphere and geomagnetic tail [Hughes, 1995]. Magnetic field lines are shown using solid lines while the dashed lines shows particles moving along the field subject to the ...", and I think that sizes are in R_e units (6400km).

The original source of this figure is Hughes95, http://www.ss.ncu.edu.tw/~lyu/lecture_files_en/IntroSpacePhysics_KivelsonRussell/SPIntro/SPIntro_9_new.pdf page 232 (he taked the picture from "Pilipp and Morfill 1978"). The "X line" point is located near 115 R_e. Moon orbit semi-axis is at 60 R_e (60 Earth radii). Sun-Earth L2 is 240 R_e, so we can expect something around 60 R_e diameter of Magnetopause at L2.

200,000 - 300,000 km halo orbit around L2 is equal to 30-40 R_e. So I can conclude that Earth magnetosphere may cover the exact L2 point. But at the same time, it is unlikely to give much protection or constant protection to the satellite orbiting so far from L2 (actually, it is periapsis of halo orbit parameters of the Gaia).

Not the answer you're looking for? Browse other questions tagged radiation lagrangian-points the-sun or ask your own question.

9
What are reasons to put Gaia space telescope into L2 Lagrangian point of Sun-Earth system?
7
What plane will DSCOVR’s orbit be in?
7
How could transfers between SEL1&2 and EML Lagrange points be utilized?
6
Are large halo orbits around L₁'s and L₂'s preferred over small orbits for reasons other than geometry?
1
Why has the Earth-Sun libration point L1 been chosen over L2 for NEOCam (now NEO Surveyor) to detect new NEOs?
3
If Juno's long orbit means a lower rate of radiation damage, why the planned short orbit?
5
How far would the Mars L1 Lagrangian Point be from Mars?
8
Can you avoid the costs of cooling superconductors for magnetic shields by separating them from the spacecraft and using shades?
5
Did the Apollo missions use the Earth's magnetotail to lessen cosmic radiation?
5
Why put X-ray telescope Spektr-RG/eROSITA all the way out at Sun-Earth L2?