somewhere in a galaxy a long time ago I was informed that accelerating a spaceship at one gravity (Earth value) would result in near relativistic velocity after only one day (Earth value) - I was intrigued by this and wonder how much propellant (mass) would be required to achieve this velocity please ? assume a living quarters mass of 1000 kilograms.

The thing you are describing is usually studied under the term 'relativistic rocket'. Here is a good summary of the formulae you need. All of these can be derived using Special Relativity (it is a common myth that you need General Relativity to deal with acceleration: you don't, you need it to deal with gravity or equivalently non-flat spacetimes).

One important thing to bear in mind is that the proper time, $T$, experienced by people in the rocket becomes increasingly different than the time, $t$ experienced by an inertial (unaccelerated) observer watching the rocket zoom off into the distance, which I have called inertial time below.

That being said, the velocity of the rocket as a function of $T$ – the time experienced by people in the rocket – is given by

If we assume that $a = g$, then plotting $v/c$ for two years of proper time looks like this: 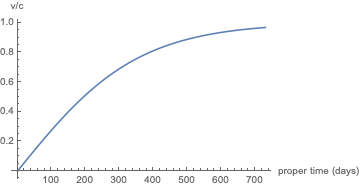 You can also compute $v$ as a function of $t$: the time experienced by an observer stationary with respect to the rocket when it's launched:

And we can plot this for two years of inertial time: 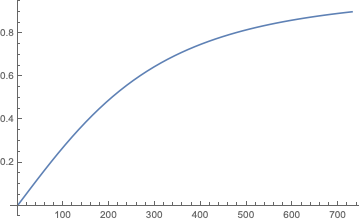 So, what about fuel? Well, the best rocket we can build, even in theory, is a 'photon drive': something which converts mass to photons and squirts them out of the back of the rocket. Assume we can do this with an efficiency of 1: all our reaction mass gets converted to light and squirted out of the back of the rocket. We'll carry fuel $M$ and have a payload of $m$, and we can work out $M/m$: 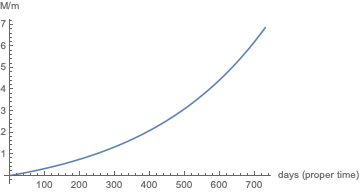 So: if we assume a propulsion system which is implausibly good, things are not that bad.

[I am less sure about what follows than what's above because I did some more-or-less back of the envelope maths which may have errors.]

A photon drive, especially one with an efficiency of 1, is not terribly plausible. Well, you can generalise the Tsiolkovsky rocket equation for relativistic rockets, and you get this:

And we can rearrange this to get an expression for $M/m$:

I initially thought this must be wrong as there is no $c$ anywhere, but I think it is in fact OK. In fact this equation is true for any rocket of course, although since it assumes $a$ is constant the engine needs to be throttled.

So, I had a look at what $v_e$ might be for a couple of plausible technologies:

The mass of our galaxy is around $2\times 10^{42}\,\mathrm{kg}$: the amount of fuel you would need for a payload of a tonne is stupidly more than the mass of the galaxy in both these cases: more by ratios which can't be expressed with machine floating-point numbers for a 64-bit machine. In fact I am reasonably sure that the mass of fuel you need is absurdly greater than the mass of the observable universe!

Here is a plot for $M/m$ for exhaust velocities up to $0.1c$, for a rocket accelerating for a year at $a = g$. Note both the log scale and the fact that the left-hand (low $v_e$) end is missing. 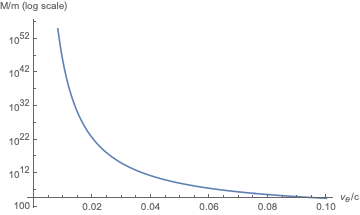 This is why these kinds of rockets are not practical with any technology we have.

Assuming an exhaust velocity of 4400 m/s, the rocket equation says you need a fueled-mass-to-dry-mass ratio of about $3.75 \times 10^{83}$ -- all the hydrogen in the universe could maybe get a single electron up to speed if burned in a chemical rocket.

If electrical thrusters could achieve that kind of thrust-to-weight ratio, things get significantly better. Assuming an ion engine with an exhaust velocity of 50000 m/s, the needed mass ratio is only 23 million or so! Your crew cabin may be only one ton but you're going to need engines and power to run the engines and so forth, but at least this approach implies a spaceship that can be comfortably built with the resources of a single planet. It's going to take you 1535 years to get to Proxima Centauri, though, and you aren't relativistic enough for it to feel significantly shorter. And you won't have enough fuel to slow down when you get there.

8
Proportions of a reentering spacecraft as compared to fuel mass
9
How much extraneous mass did each of the Apollo missions carry?
14
Why are rocket mass on the launch pad and payload mass to LEO not strongly correlated?
4
Common usage of "dry-mass"
1
Is centre of mass a factor in space without gravity?
2
Problem in finding propellant mass using rocket equation, where total mass includes components dependent on propellant mass
1
Looking for figures for contemporary interstellar engine options
2
Is "liftoff mass" = "ignition mass"?
2
Calculating total burn time for a rocket under constant acceleration with two propellant consumption rates