What attitudes will Starlink satellites have in different orbits?

SpaceX is working on a "sunshade" that will reduce reflection of satellites sent in future launches.

Currently, the spacecraft are in a parked orbit, but over the next few months, the craft will use on-board engines to move slighter further from the Earth and rotate their solar panels towards the Sun. That will make them less visible to the naked eye but could mean they cause light pollution for astronomers trying to take pictures of the farther reaches of space.

I'd like to simulate the visibility of the tens of thousands of satellites on Earth based on descriptions of the distribution of orbits and their segments illuminated by the Sun visible to locations on Earth where dawn/dusk astronomical observations are possible (e.g. see answer(s) to What is the LSST's plan to address frequent satellite trails in data?).

This will be a rough simulation but it still requires some model of the Starlink satellites themselves, since they contain both diffuse and specular surfaces. The same way that the nearly flat antennas of the Iridium satellites caused "Iridium flares", the solar panels of the starlinks could cause (much less spectacular) flares and the diffuse surfaces would also be sources of light; I'll just start with a Phong reflection model for those.

From the images below I see that the satellites look like giant L-brackets with the satellite and its solar panels both thin, flat, and oriented at right angles.

The antennas are phased arrays and so can steer their beams over some range electronically, so the "bottom part" might not necessarily have to be oriented facing exactly nadir. Each satellite will be power-hungry, using electrical power continuously for transmitting tweeted images of cats to thousands of customers and during daylit periods recharging its batteries for the next eclipse, so it will want to orient itself to capture plenty of sunlight.

Question: What attitudes will Starlink satellites have in different orbits? Will the attitude be fairly constant throughout each period, or will it do a "dance" during each orbit in order to keep its bottom facing nadir to Earth while its panel optimally facing the Sun?

There are some depictions of Starlink satellites below of unknown accuracy. 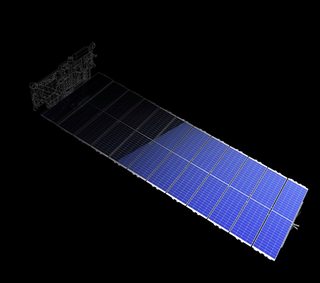 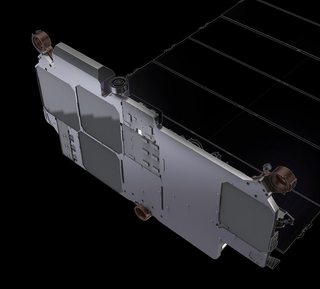 below left: From Teslarati.com's SpaceX wants to offer Starlink internet to consumers after just six launches, right: an earlier incarnation of SpaceX constellation from SpaceX's 4,425 satellite constellation - what's the method to the madness? 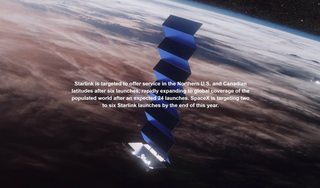 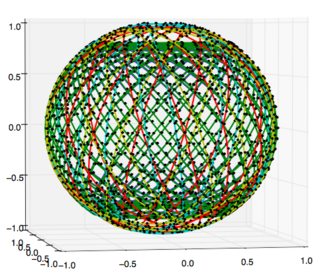 9
How to calculate the planets and moons beyond Newtons's gravitational force?
25
SpaceX's 4,425 satellite constellation - what's the method to the madness?
11
Why no Iridium-level flares from other satellites?
7
Physical meaning of perigee advance
5
What goes into an Iridium Flare prediction model besides the ephemerides?
3
Why are some Starlink launches announced as instantaneous and some not?
1
How did SpaceX's VisorSat work? How did the sunshade articulate to shade parts of Starlink satellite as it orbits the Earth?

5
What goes into an Iridium Flare prediction model besides the ephemerides?
10
How will several thousand Low Earth Orbit satellites affect the night sky?
11
Why no Iridium-level flares from other satellites?
5
What does the StarLink constellation look like now? Numbers of planes and inclinations?
20
Why will Starlink satellites use krypton instead of xenon for electric propulsion?
13
Is it feasible to paint SpaceX Starlink satellites black so as not to frequently saturate the CCDs of the Large Synoptic Survey Telescope?
51
What impact will the deorbiting of thousands of satellites have on the atmosphere?
3
Are Starlink satellites flaring?