How could Mercury be used as a gravity sling to the outer planets?

Mercury's orbital speed is 48 km/s or about 10 AU/year. Wouldn't probes accelerate towards the Sun if we give them a little push from LEO, and only 0.6-1.6 AU from here take a big gravity assist from Mercury? Its orbital period is only 3 months, so we could frequently choose any direction of its graviational assist we need to get to any other planet (compared to Jupiters 11 year orbit).

How large fraction of Mercury's orbital speed could a probe get through gravity assist, if it passed really nearby? And could a gas giant capture into its orbit a probe with such high speed? Would the heat at Mercury be a challenge for a flyby probe?

I don't think Mercury has been used for gravity assists inspite of its vicinity and high speed, so what's the catch?

It takes more than a little push to drop a probe to Mercury. A 1 AU x .387 AU heliocentric orbit would be moving 22.25 km/s at aphelion. Earth moves about 30 km/s. So Vinfinity for Trans Mercury Insertion would be 7.78 km/s. From LEO the burn would be about be about 5.5 km/s.

At perihelion the ship would be traveling 57.5 km/s wrt sun. It'd be traveling a hyperbolic path wrt to mercury. Vinfinity wrt to Mercury is about 9.2 km/s. If Mercury periapsis were 0 km from Mercury's surface, turning angle of hyperbola would be about 10.2 degrees.

I think the Mercury gravity assist would be good for 1.7 km/s at best. Which wouldn't be sufficient to boost aphelion to Mars, much less Jupiter.

From LEO, Trans Jupiter Insertion is about 6.3 km/s

Jupiter capture might be possible through one of Jupiter's moons changing the probes path, or maybe if the probe's periapsis passes through Jupiter's atmosphere. But Jupiter's gravity alone would not change a hyperbola to an ellipse.

Here's a pic showing how a hyperbola's velocity approaches Vinf as it grows more distance from the central body: 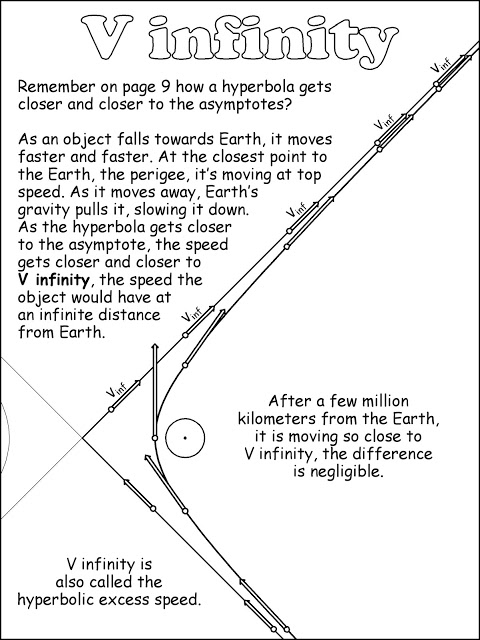 Not the answer you're looking for? Browse other questions tagged gravity-assist mercury or ask your own question.

71
When will New Horizons overtake Voyager 1 in distance from the Sun?
14
Orbital mechanics: trying to understand counterintuitive behavior (braking to overtake)
2
Gravity assist from Mercury

8
Could Cassini crash land on Mercury?
10
How tectonically active is Mercury?
6
Can we speed up spacecraft to suitable interstellar travel speed using oscillating gravity assists on planets on opposite sides of the solar system?
2
Gravity assist from Mercury
2
STK Astrogator Earth Flyby
7
Is a graviational slingshot around Mercury a feasible solution for space probes?
3
Could a spacecraft make two stable orbits around Mercury at an altitude of three miles?
4
Could the magnetosphere of Mercury protect humans?
1
How do space agencies choose arrival dates to planets (i.e. Mercury) from a gravity assist (i.e. Venus)?