I don't even know how to exactly ask this question. A coworker is doing some experiments on a data visualization software and he has some test data showing fake telemetry from a simulated satellite. This data shows a polar orbit, but once displayed on a globe it looks weird: the satellite always follows the same path around the globe, like if it was rotating at the same speed as the earth. It looks like this (Sorry, I can't show you the original but only this very accurate Paint 3D reproduction): 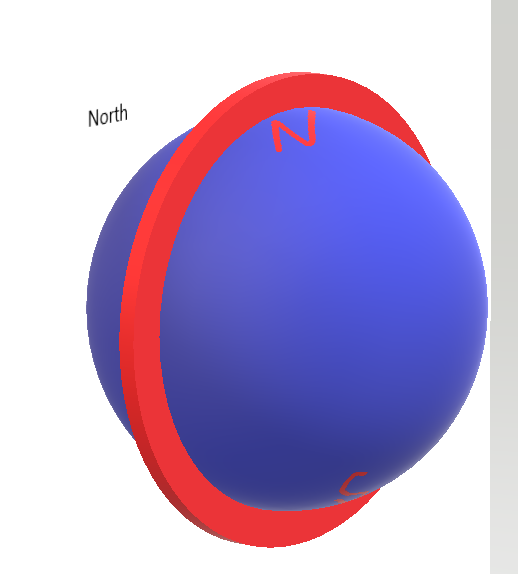 Our question is: is this kind of orbit possible ?

A polar orbit can be geosynchronous and always follow the same path, but that path cannot be straight along a meridian. If the orbit passes on top of both poles, then the orbit lies on a plane containing both poles, which cuts the earth longitudinally like two opposite meridians do. However, as the satellite travels along that orbit, the Earth moves so its path superimposed on the Earth will not be straight along a meridian.

The simulation linked by JCRM shows how the path of a polar orbit looks like on Earth: https://observablehq.com/@jake-low/satellite-ground-track-visualizer

Set orbit inclination to -90° for a polar orbit.
You can also set orbital altitude: see how by rising the orbit up to 35000km the multiple paths gradually merge into one.
(Geosynchronous should be at 35,786km, which is at the limit of that simulation parameters and unfortunately only a part of the path is shown)

For a circular polar orbit with period $p$, then for successive passes over the equator, the point where the satellite is directly overhead will move west by a distance of about

In real life there will be various perturbations which make this not quite accurate.

From this it's easy to see that the track of the orbit can never be a great circle: it must necessarily pass over both poles, but the angle at which it cuts the equator can never be $\pi/2$, and any great circle which passes through the poles must cut the equator at that angle.

There is, I am sure, software which will compute & plot orbit tracks: I'm afraid I don't know of any to recommend however: if someone else does feel free to edit this answer.

Not the answer you're looking for? Browse other questions tagged orbit geosynchronous polar-orbit or ask your own question.

4
Is a polar geosynchronous orbit described by Viviani's curve?