Did Project Horizon draft any proposals for small arms weapons for astronauts?

The 1959 Project Horizon discusses building a base on the moon, and also, according to the Wikipedia article, mentions weapons to be used for (of course) fighting the Soviets attacking the moon base, on the moon itself.

"The base would be defended against Soviet overland attack by man-fired weapons:

However, there is no citation for this on Wikipedia, and I'm curious if other weapons were proposed.

It seems ludicrous to only arm soldiers on the moon with only rocket launchers sporting nuclear warheads.

What other weapons, if any, did they propose in Project Horizon?

If Project Horizon didn't propose anything else, has anything been proposed since then?

The same ideas (and in some cases the same text) get repeated in a bunch of places (occasionally without modification) and without source which was not a compelling start. There were no references to actual arms, small or otherwise, in the readily available Volume I and II of the Project Horizon report. One commercial bookseller publishing a collection of Project Horizon stuff claims that Volume III of the report remains classified, and that seemed likely to be the one with the goods in, disappointingly.

With sufficient searching though, I finally turned up this little reference from Small Arms Review, which observed that it was no longer classified and even went as far as to provide a nice free download link, full of all sorts of goodies. They obtained access from Shrivenham Small Arms Library which is not a facility open to the public. This is the only source I found for the document, so it doesn't necessarily have particularly good provenance... compare the awkwardness of getting Volume III compared to the ease of finding I and II. It still seems to have been either only partially scanned or was partially redacted, as it only contains chapter 3, and no other part (such as an index). There's at least another 100 pages out there somewhere... 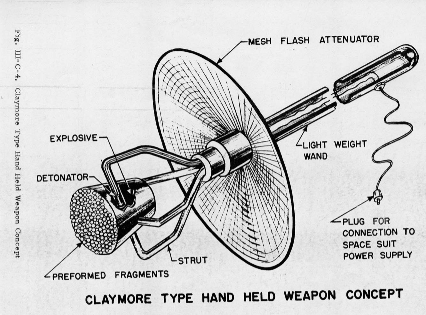 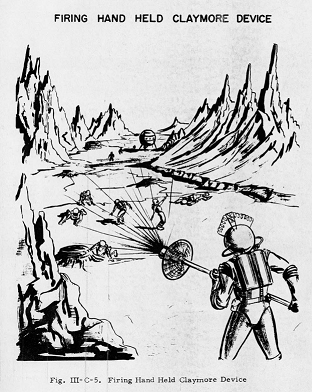 the key observation being that the backblast of a claymore is somewhat less hazardous in a vacuum, making it practical to use one onna stick.

As promised by the unsourced wiki text, conventional claymore mines and Davy Crockett-type man-portable rocket launchers were also considered, though the latter included a provision for non-nuclear warheads. Also mentioned are grenade launchers and a pistol that fired buckshot (for ease of aiming). There's other scifi goodness in there too, such as

which sounds like complete technobabble garbage to me, but who knows. They do at least admit that such a thing would be too hard to develop in a useful timescale and probably too heavy, too.

Anyway, dangling wiki reference issue solved, and a fascinating bit of work regardless of whether it is genuine or not.

With regards to future work, one reference that pops up a few times, probably because of its name, is the 1965 work The Meanderings of a Weapons Oriented Mind When Applied In A Vaccum Such As On The Moon with a splendid subsection entitled "Possible Weapon Concepts Whose Feasibilities Have Not Been Determined But Are Presented As Ideas To Stimulated Thinking", which seems to roughly translate as a weapons list for a scifi RPG, complete with specs and illustrations. Not as cheesily awesome as the ones in the Project Horizon report above, alas.

I've no doubt other work has been done since, but is likely to be of a less cheerily speculative nature and more of a practical one, and as such seems likely to still be classified.

If anyone from the US was feeling particularly keen, maybe they could make an FOIA request? Assuming any other copies of the work still exist and it was indeed declassified, it might be possible to locate them or at least see if this one is a work of fiction.

Not the answer you're looking for? Browse other questions tagged the-moon weapon lunar-base or ask your own question.

7
Is it possible to develop a small orbital rocket, like RocketLab's Electron, for a weapons delivery system?
8
Did the Apollo astronauts suffer any health effects from inhaling lunar regolith?
1
What joints of Apollo 17 space suits did moon dust get into, making the astronauts arms difficult to move?