Did the space shuttle fly straight "up" when leaving Earth?

I was watching space shuttle launch recently, and at 2:53 you can see the space shuttle from an angle, even though it's high above the earth and you should see only the bottom.

Did the space shuttle fly straight up at its launch or did it have a curve in its path? 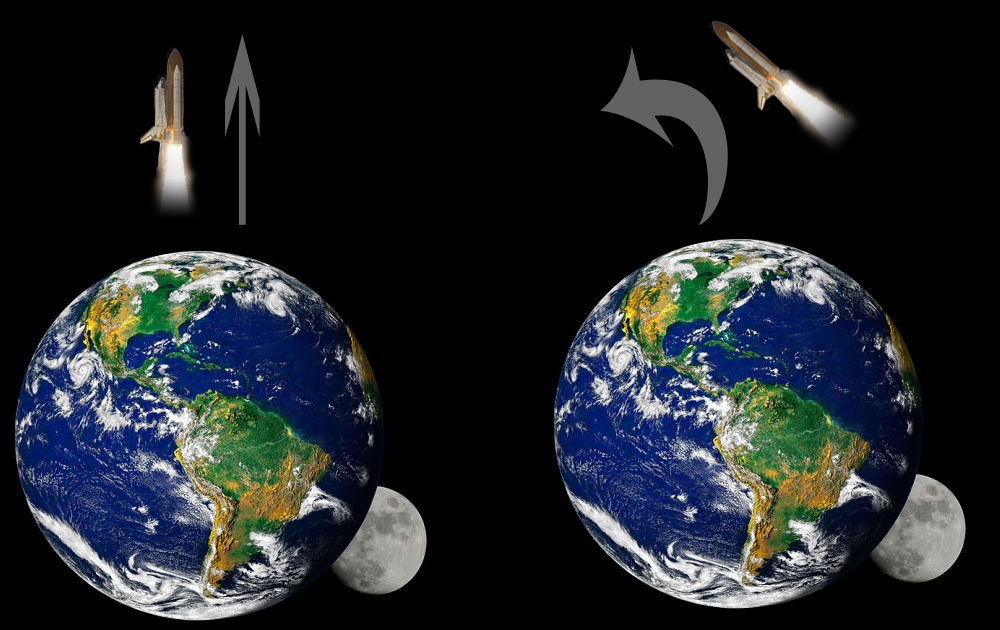 Everything (not only space shuttles) that goes into the Earth orbit must curve its path on the way up. If a vehicle went straight up and did not achieve escape velocity, it would fall back to Earth after the fuel runs out.

It only goes straight up for a few seconds as it's clearing the pad. It turns to an angled path almost immediately after clearing the launch platform and begins traveling more horizontally than upwards very soon. If you listen to the audio from NASA TV during a shuttle launch, you'll hear them call out altitude, speed, and distance downrange at semi-regular intervals. By about 50 seconds, it is twice as far horizontally downrange as it is above the surface in altitude. You can listen to the audio in this shuttle launch from NASA TV. As others have said, this is because anything in low Earth orbit must accelerate to around 18,000 mph horizontally in order to stay in orbit. Basically, the speed tangent to the surface of the Earth must be such that the acceleration towards the Earth from gravity causes the object to fall around the Earth in a closed loop rather than falling into the atmosphere.

The major burn is a 7.7 km/s acceleration in the horizontal direction. But the first part of the trip is usually a vertical climb:

Apollo Ascent profile from a NASA history page. Rescaled to show how horizontal the flight was:

Why the vertical ascent before the major horizontal burn?

Notice max-Q is marked at the beginning of the trajectory. Max Q for spacecraft is often around 35 kilopascals. For scale, a severe hurricane is 3 kilo pascals.

Achieving orbital velocity at sea level would subject the spacecraft to 36,000 kilo pascals.

Temperature is another concern. Most meteors burn up in the mesosphere about 70 kilometers up. The air at sea level is about a thousand times as dense.

So a vertical ascent must be made before doing the horizontal burn.

The ascent is often portrayed as trivial compared to achieving the needed horizontal velocity. The potential energy between sea level and a 120 km altitude is about 1.2 mega joules per kilogram. But the kinetic energy of low earth orbit is about 30 mega joules per kilogram. So the popular wisdom is that ascent is 1/25th as hard achieving orbital velocity.

But potential energy isn't the only cost of ascent. Gravity loss is incurred during a vertical climb: 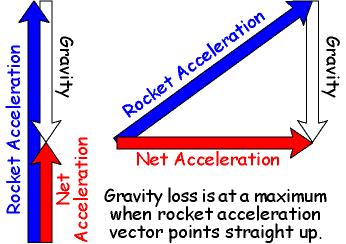 A large thrust to weight ratio (T/W) is desirable to minimize ascent time. The more oomph a booster has, the less ascent time and the less gravity loss. This is one reason a booster might have 9 rocket engines while the upper stage may have only one.

at 2:53 you can see the space shuttle from an angle, even though it's high above the earth and you should see only the bottom. 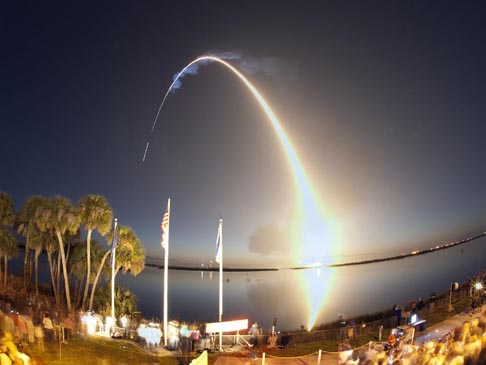 Actually, just after liftoff the Shuttle does a roll maneuver so it will fly with the top of the orbiter facing down. This is done to minimize the loads on the Shuttle components. 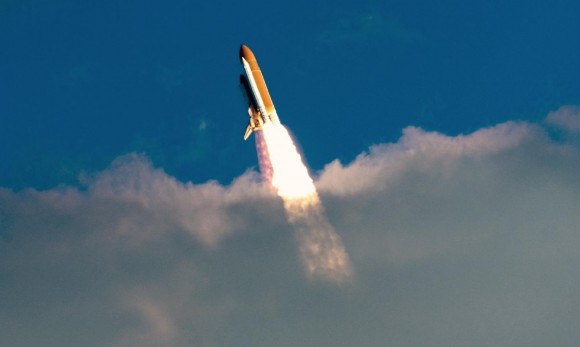 Any launch to orbit follows a common path. First they have to get above the atmosphere, to keep slowing from it down to a minimum. Then they need to re-orient to accelerate to maintain orbit. If you simply launched straight up, you'd fall straight down, it's the speed that makes the difference.

There's a pretty good wikipedia article about how this is managed called Gravity Turn. Basically, the rocket only goes straight up for a short period of time, then turns slightly off to allow Gravity to actually work for the rocket.

I had some old optimal control software lying around. It's a really good match for this question, so I decided I would use that to attack the theoretical underpinnings of this question.

The central question I see is, does the shuttle want to roll to some non-vertical angle? Of course, by "the shuttle" I really mean the engineers who design it. And by the engineers, I really mean the underpinning mathematical reality. In short, will you burn less fuel if your trajectory is tilted somewhat? We would think the answer is "yes", but it's not easy to justify that. It's also not clear what the motivation is. If there were no atmosphere, we would prefer to launch horizontally, actually.

One way to answer this is to use numerical methods to brute-force the problem to a solution. Develop a figure-of-merit "score" function, and then vary the trajectory so that you get the best value. Numerically, you can probably accomplish this by guessing some initial trajectory and then using the calculated Jacobian and Hessian to approximately locate the nearest critical point, where the figure-of-merit is (hopefully) at a local minimum.

So to simulate, here are some of the things I take into account:

At the end of the simulation, a figure of merit function tallies its score. These are chosen arbitrarily in order to get the outcome we want. In particular, I:

The idea is that an optimizer program will find you the best combination of all these three for the lowest price. This is what I obtained in terms of the angle at which the thrust is applied. This is relative to the vertical, in the sense that 0 degrees would be applying thrust straight up. Note that thrust and velocity aren't always in the same direction. This represents the "best" way to angle the rocket to get the best performance. 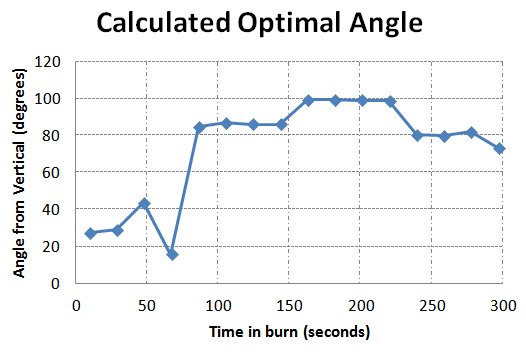 This type of method does often have problems with it. A lot of the "harry" behavior there is likely due to model errors as problems with the derivative calculations and other types of artifacts. The simulation runs over 500 intervals... and there are 17 independent variables for which the second derivative determines the system. Since it's near the critical point by definition, the figure-of-merit is highly insensitive to these variables and that can cause problems.

Nevertheless, it shows what I wanted it to show - the optimal trajectory clearly follows a non-vertical path near the surface. FYI, the initial angle here is about 27 degrees relative to the vertical. I would expect that real-world scenarios would be using numbers that are somewhat close to this.

Mathematically, that is a fairly rigorous justification for the angle at which rockets fly once they're clear of the pad. It would, indeed, be more optimal to tilt the launchpad itself. Logistically, that sounds like a really bad idea. So the engineers compromise by turning to the optimal angle after the launch pad has been cleared.

The Earth moves, and if the shuttle is travelling in a straight path it wouldn't make sense, because the Earth is moving, and we would perceive for it to be moving in a curved way. Not sure, but I think this is the coriolis effect.

Found a cool video on what happens if we dig a hole to the middle of the Earth. Somewhere in this video, it suggests that people wouldn't be able to dig a massive hole into the Earth and jump into it because of the coriolis effect.

1
Why don't some rockets launch in a straight line?
3
What if the Shuttle went straight up?
4
What is the basic optimal trajectory for a launch vehicle?
3
Why don't the hottest temperatures of a re-entering spacecraft occur near the "bottom"?