Can L3 have halo orbits?

and while halo and other orbits associated with Sun-Earth L1 and L2 work similarly, L3 is 2 AU away from Earth compared to 0.01 AU for the first two.

note: I'm asking about the general circular three body problem (CR3BP) so the two major bodies can have any ratio of masses. Answers don't need to be necessarily constrained to the Sun-Earth system. 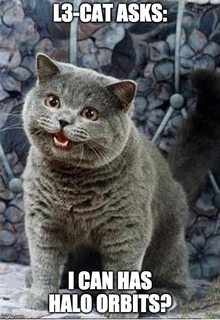 Halo orbits definitely exist around any of the collinear Lagrange point and in most regards your comment:

is correct. Halo orbits are just special cases of Lissajous orbits. You can generate these orbits in the same way you would a halo orbit around L1 or L2 (usually some differential correction method).

There is some literature available on L3 halos but since for now they seem pretty much useless except for sci-fi supervillains, they are not treated as much as L1 or L2 halos. The principles remain the same however. I added to articles below for reference.

Transfers from Earth to EM-L3 halos

11
How to best think of the State Transition Matrix, and how to use it to find periodic Halo orbits?
11
What sort of orbital elements are used to describe halo orbits?
7
Why would Hollywood's Planet X (at earth's L3) be unstable?
2
Roughly how many kinds of closed or periodic orbits are there in the circular restricted three-body problem?

12
Are some Halo Orbits actually Stable?
6
What is the difference between halo orbits and Lissajous orbits?
2
Do horseshoe orbits have anything to do with Lagrange points? Do words fail us here?