Advantages of launching very large rocket while submerged, buoyant, in a body of water

I vaguely remember reading about some supposed advantages of launching very large rockets (Saturn size and larger) from underwater in an ocean or similar large body of water. I was recently reminded of this by a short scene in a popular show (no spoilers) showing a rocket larger than Saturn emerging from the sea in a fiery launch.

What are the advantages of a submerged launch, if any? Has any serious work been done in this area? Or is this idea just imaginative science fiction?

is: For All Mankind on Apple TV+, last episode of Season 1, past the closing credits.

The very large rocket was probably Sea dragon and the advantages were more on allowing a massive vehicle to be built at all rather than inherent advantages in starting underwater. 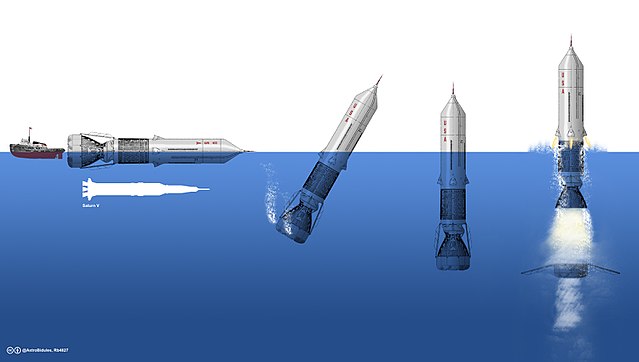 Building the launch vehicle on a slip way and floating it to the launch site bypasses a number of size constraints in building and moving large assemblies (possibly mythical example) on land. It also potentially allows optimal launch site selection and simple range clearance. Flooding tanks to get the vehicle upright can be simpler to organise than very large cranes or vertical integration.

Starting a rocket while submerged technically allows the vehicle to start moving upwards from the positive buoyancy, by dumping ballast getting lift for 'free'. On the other hand a vehicle starting on land doesn't need to do anything to reach sea level to start with.

Actually starting the rocket while submerged would technically get increased thrust from the ground effect, but the pressure effects and water hammer potential would be complicated to manage and notably submarine launched ballistic missiles generally cold launch, floating to the surface and only firing once clear.

The downside of submerged launch is that the rocket also needs to be strong enough to withstand positive pressures, wave motion and salt water which look to far outweigh the advantages other than the special case of firing from a submarine. It also by definition is starting at low altitude in thicker atmosphere where some minor advantages can be had launching from high ground.

You might be thinking of the Sea Dragon project, although this never got past the conceptual / early planning stages.

Some of the advantages of a sea launch are that you can be far away from habitation and the water can provide cooling and acoustic damping during launch.

But the disadvantages are also serious. You are even more at the mercy of the weather than a traditional launch and sea water is both corrosive to rocket engines and contains all manner of organisms that would like to encrust the rocket and turn it into their home.

Early in the development of the Polaris missile system, there was a lot of work on launching a missile from underwater.

Polaris was a nuclear deterrent to rapidly launch multiple missiles from a fully submerged submarine. Staying submerged until a boat-load of launches were complete was a key goal: the boat was to be very difficult to track and destroy even as multiple missiles were rising from it.

The project attempted to launch using a much smaller “extractor” motor, but this was also not successful. Designing a tube (to protect the sub) and aft missile end (to protect the missile during launch, which was the point after all) was not compatible with an extractor motor that could lift the missile to the surface.

In the end, they went with an air-powered push to the surface, followed by motor ignition when the missile has cleared the surface.

There are persistent rumors that certain Russian torpedoes use rocket motors for propulsion. Torpedoes are small, tough, and their weight isn’t so important.

Polaris and it’s follow-ons are ballistic launchers; they don’t go to orbital speeds. It seems hard to believe that a rocket for orbital use could be built tough enough yet light enough to launch from under water.

In addition to the factors mentioned in other posts, there's an additional benefit from launching from the ocean: you can launch from international waters. This could be handy if you're launching a rocket that uses some form of material or process that is illegal or heavily regulated for civilian use in your home country. For instance, you could potentially use the legal shelter of international waters to launch an Orion-drive/nuclear pulse propulsion rocket, since the Nuclear Test Ban Treaty bans its signatory nations from allowing the civilian use of nuclear explosives (though in this specific case, you'd probably want a conventional, chemical first stage to get it free from the water before you activate the main engine).

33
How did the U.S.S.R manage to rotate the N-1 from horizontal to vertical?
7
Does the Partial Nuclear Test Ban Treaty apply to nuclear pulse propulsion and its use in outer space?

4
What are the advantages of water-based sound suppression vs. cliff-based launching?
3
Launching a rocket from a weather balloon for a very small payload