@BowlOfRed's answer to Which of the recently launched Starlink satellites is the coated one? links to Celestrak's supplemental table for Starlink. https://celestrak.com/NORAD/elements/supplemental/table.php?tleFile=starlink

At the moment it shows: 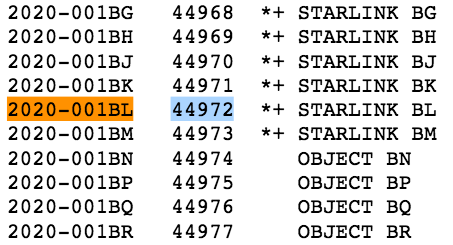 update 1: A new batch has just been launched and they are once again in the 7100's 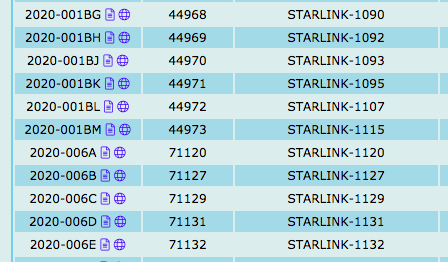 update 2: An even newer batch has just been launched and they are once again in the 7100's 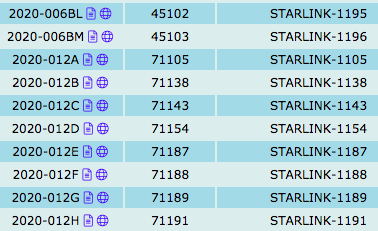 As I mentioned in a comment, without source at the time...

When the SATCAT was first setup, all of the information was being kept in one large database and certain number ranges were set aside for different uses. The number range of 1 through 69,000 was designated as the actual satellite catalog. The range of 70,000 through 79,999 was set aside for the initial element sets used as temporary intermediaries before cataloging as explained earlier. The range 80,000 through 89,999 was set aside for analyst satellites—those objects which are being tracked but cannot be put into the satellite catalog because the launching State hasn’t been determined—and other temporary purposes, such as for burn plans.

Numbers 90,000 through 99,999 were set aside for uncorrelated tracks (UCTs)[2] which are observations gathered by sensors that do not correlate to anything in the catalog.

I can't answer you fully why Celestrak is wrong, but the correct number is 44972. It seems like this was updated in the other source.

New objects are around 45000 right now, they shouldn't be much larger than that.

Not the answer you're looking for? Browse other questions tagged artificial-satellite tracking two-line-elements celestrak satcat or ask your own question.

5
Which of the recently launched Starlink satellites is the coated one?
6
Is Starlink 1130 (Darksat) really dimmer?
3
Why are there some NORAD catalog IDs larger than 80000 in space-track?

15
Why are satellites and other payloads always placed at the top of rockets?
8
Why is it so difficult to predict the exact reentry location and time of a very low earth orbit object?
4
Why has no TLE been published for the DSCOVR satellite and the Falcon 9 R/B?
16
Why do so few satellites pass over the poles, and why do so many focus on the equator?
4
Why are space probes and satellites not destroyed by meteor showers such as the Perseid?
9
Are most Earth polar satellites launched to the South or to the North? And why?
15
Why do satellites appear to move faster when overhead and slower closer to the horizon?
2
Why Celestrak has Archived TLEs for most space stations from Russia and the US, but not Tiangong-1, Tiangong-2 or Skylab?
5
Why were Europe's first few satellites so stylish? Why the pronounced alternating white and black stripes?
3
Why are there some NORAD catalog IDs larger than 80000 in space-track?