But some satellites have been around the earth more than 99,999 times. How is their rev number represented? Do you simply drop the leftmost digit?

I can't make sense of this; it's not consistent with simply dropping the leftmost digit.

But then there's always the possibility that one, or both, of these TLEs were calculated erroneously.

A detective story, not an answer

I then pulled up the historical TLEs for Explorer 7 in the time frame you suggested around 21 Aug 2019 - 27 Aug 2019. It includes the two TLEs you pointed out. From the TLEs we know that mean motion is around 14.94/revs per day, and the TLEs are roughly daily. Yet rev numbers are basically oscillating between ~42,600 and ~18,025 as @uhoh points out in his answer. Of note, object number is listed as 22U (no leading zeros; keep reading)

I then tried looking around 2016 for the next rollover. Surprise!

The rev then starts oscillating between the ~38,700 number and the 14,200 number slowly increasing until it gets to the 42,600/18,025 range around August 2019, as you discovered. So the increase that @uhoh pointed out in the bipolar distribution seems to be consistent with ~5400 revs/day

Something happened in 2015 that caused JSPOC to issue slightly different formats - namely removing leading zeros from the object ID. The transition also caused the rev counter to jump to a seemingly incorrect number. Then around Dec 2018 rev numbers from both data sets seem to be included, roughly alternating every TLE. Both rev trends, however, are consistent with the ~5,400 revs per day.

In parting I leave you with this nugget from the AMSAT TLE description page: "The folks who compute satellite orbits don’t tend to pay a great deal of attention to this number! At the time of this writing [1989], elements from NASA have an incorrect Epoch Rev for Oscar-10 and Oscar-13. Unless you use the revolution number for your own bookkeeping purposes, you needn’t worry about the accuracy of Epoch Rev." Note: I don't think TLEs have EVER been issued by NASA, it probably should say NORAD.

I received a definitive answer from an expert on TLEs.

When the rev number goes above 99,999 you should simply drop the leftmost digit and write the remaining digits into the TLE. For example:

Partial answer only; I took a small chunk of TLEs from that time frame and plotted rev number versus epoch day number and there is a bimodal distribution separated by about 24,500 revs. In other words about half of the TLEs are near your 18,000 and the other half are near your 42,600.

But I don't know why there are two groups, nor am I certain what happens when the rev number reaches 99,999. I think I have seen TLEs with rev number "stuck" at 99999 rather than rolling over, but certainly this one must have rolled more than once already.

I thought that overflow in rev number had already been addressed in this site, but looking now I can't find anything. 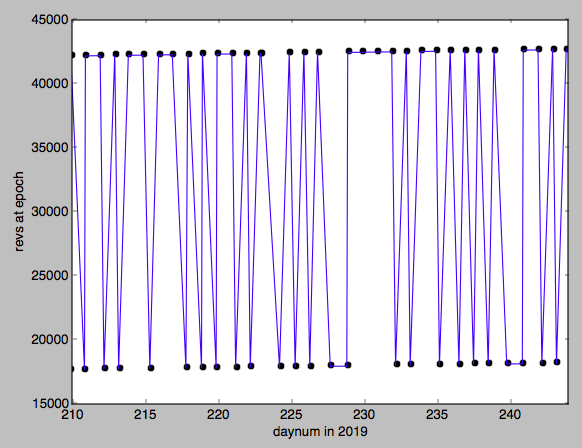 Not the answer you're looking for? Browse other questions tagged orbital-mechanics artificial-satellite two-line-elements or ask your own question.