How much of the printed materials (manuals, instructions etc.) were allocated for the crew's use in Space Shuttles?

Whilst watching youtube video of an occasional Soyuz spacecraft launch (Soyuz ТМА-19М in this case), I've noticed (at 8:07) this large bundle of books. 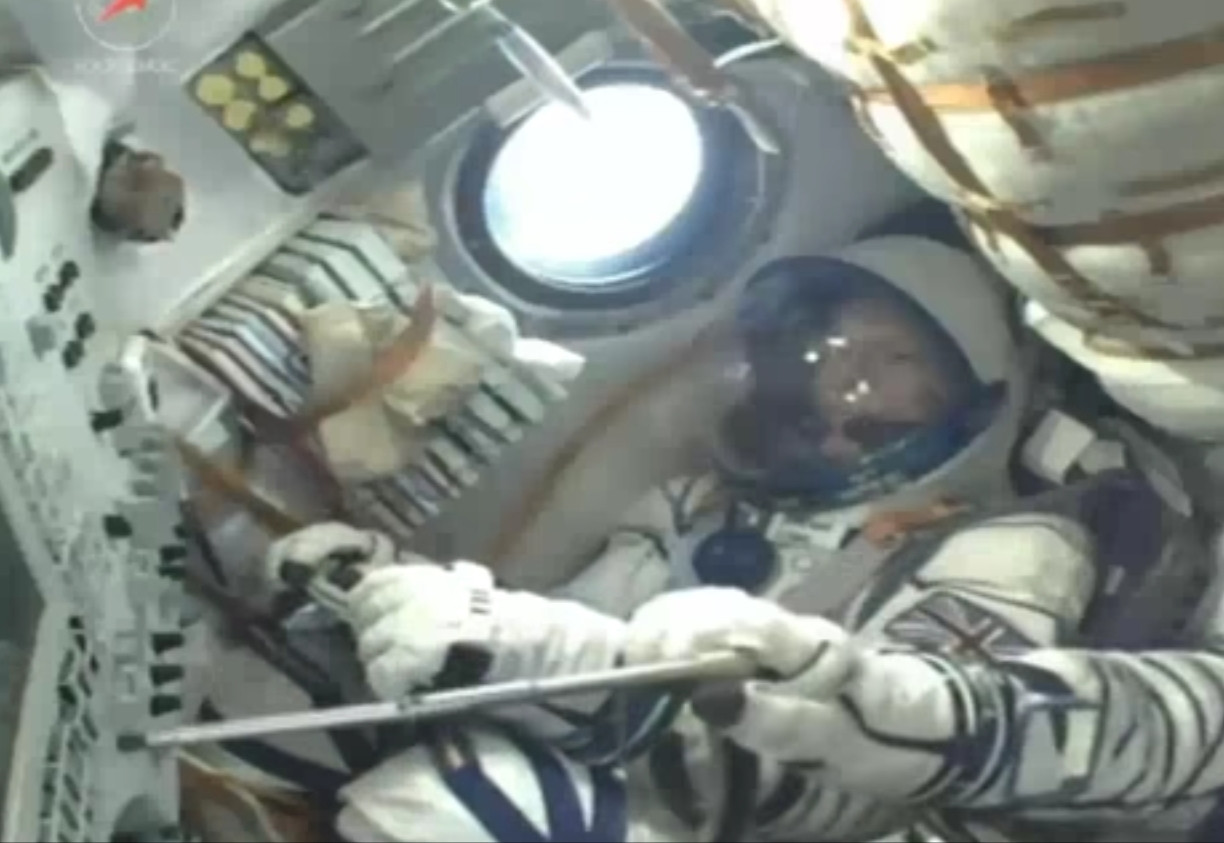 Another video of TMA-16M flight at 39:40 shows two paper checklists and one tablet being in active use by the crew during the flight, and, in addition to this, the large bundle of books stored in what essentially looks like a dedicated compartment on the right. 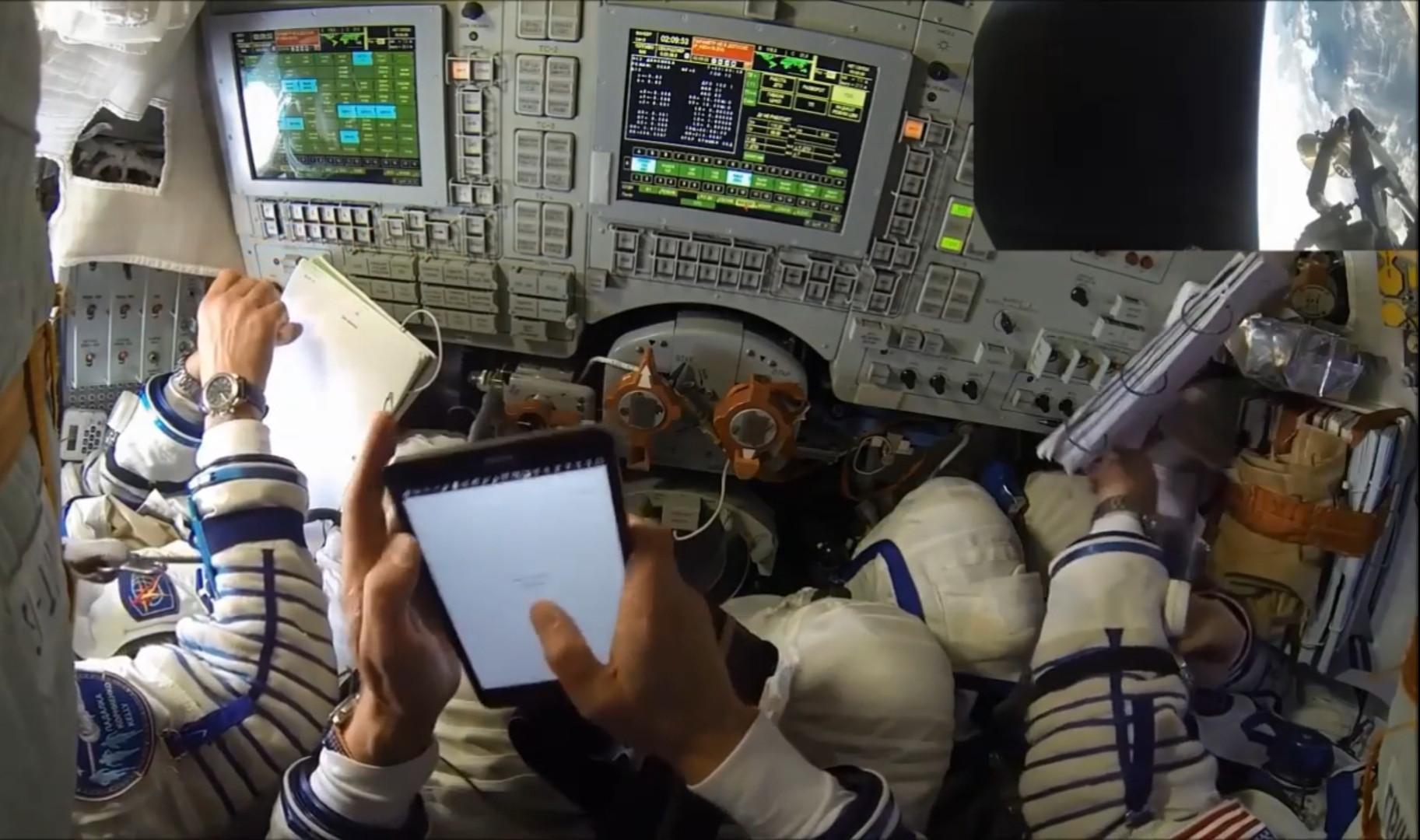 I can only assume that these are manuals and instructions for the crew (as opposed to being part of the mission payload to be delivered to ISS), otherwise why would they be located in such a spot, within the crew's easy access.

There seems to be 9 volumes of the "books" in the first screenshot. I might be mistaking, but it seems to be too much of printed instructions to be potentially used during short 6-hour mission (which is mostly to deliver crew to ISS and then later to return the crew back to Earth).

I don't know for sure, but for comparison, much more sophisticated Apollo missions probably had not much more (if not less) of printed instructions on board (I.e. flight plan, LM timeline book, EVA checklist etc.).

I don't know what these "books" in the Soyuz are (i.e. are they really instructions for the crew for various non-standard situationss and/or spacecraft's assemblies manuals or not), but if that is true, I am wondering why there is so many of them.

One of the reasons could be that there is actually a small amount of them and they are just simply duplicated in two or more languages, for example.

But my main question is: Being quite a bit more complex system, in comparison with Soyuz, how much of the printed materials (manuals and instructions for the crew's use) were on the Space Shuttle flights for the ISS-related missions (the reason I limit the question for these type of missions is because they would be more or less similarly tasked and having similar (i.e. short) length)?

Here is a list of the Flight Data File (FDF) flown on shuttle mission STS-102, a logistics/crew rotation flight to the proto-ISS. If "Copies Flown" has a number in parenthesis, that is the normal number of books flown. The actual number of books flown on this mission is listed next. This lists only the "bound" copies of the books, not the flip books, cue cards, etc which were affixed to the walls.

I could not find a document for a later shuttle mission when the ISS was more complete, but the list would have been similar, except for the addition of Joint Operations Checklist books. 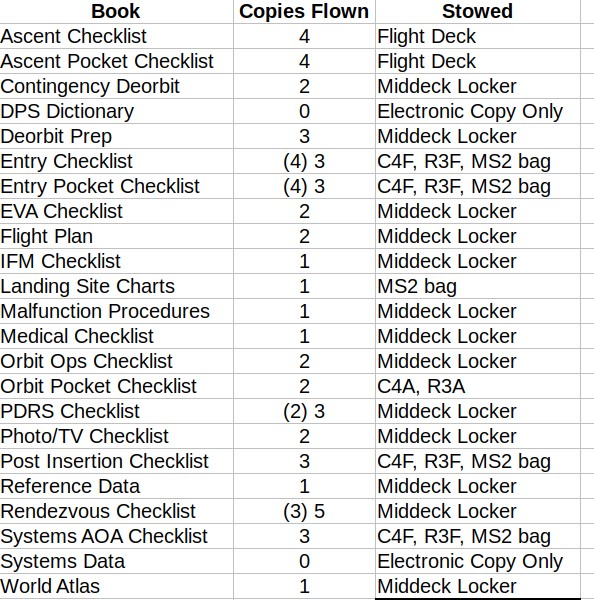 Commander Jim Wetherbee surrounded by some of the books including the EVA Checklist. 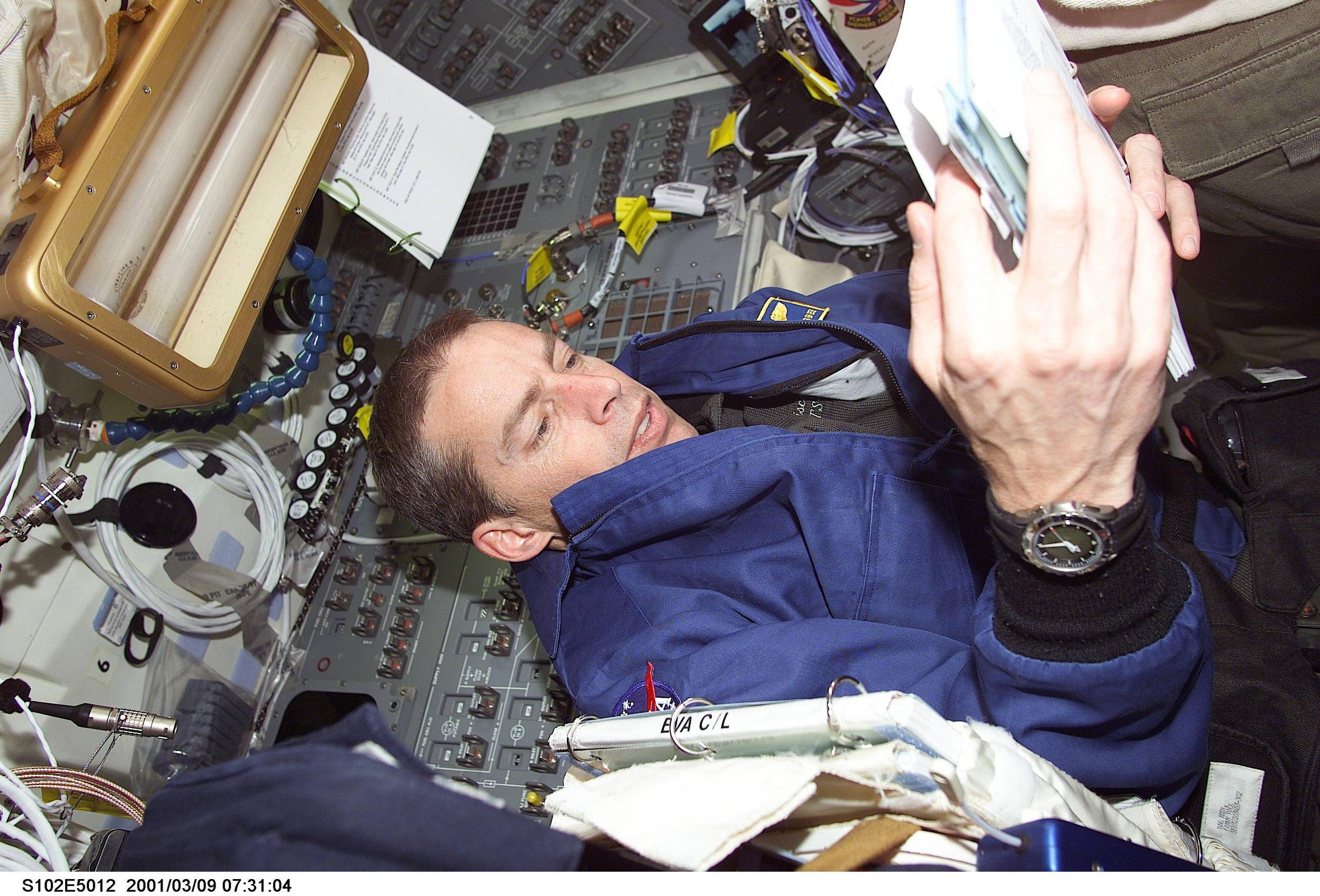 Other crewmembers consulting a cue card while holding a "bound" book and another cue card. 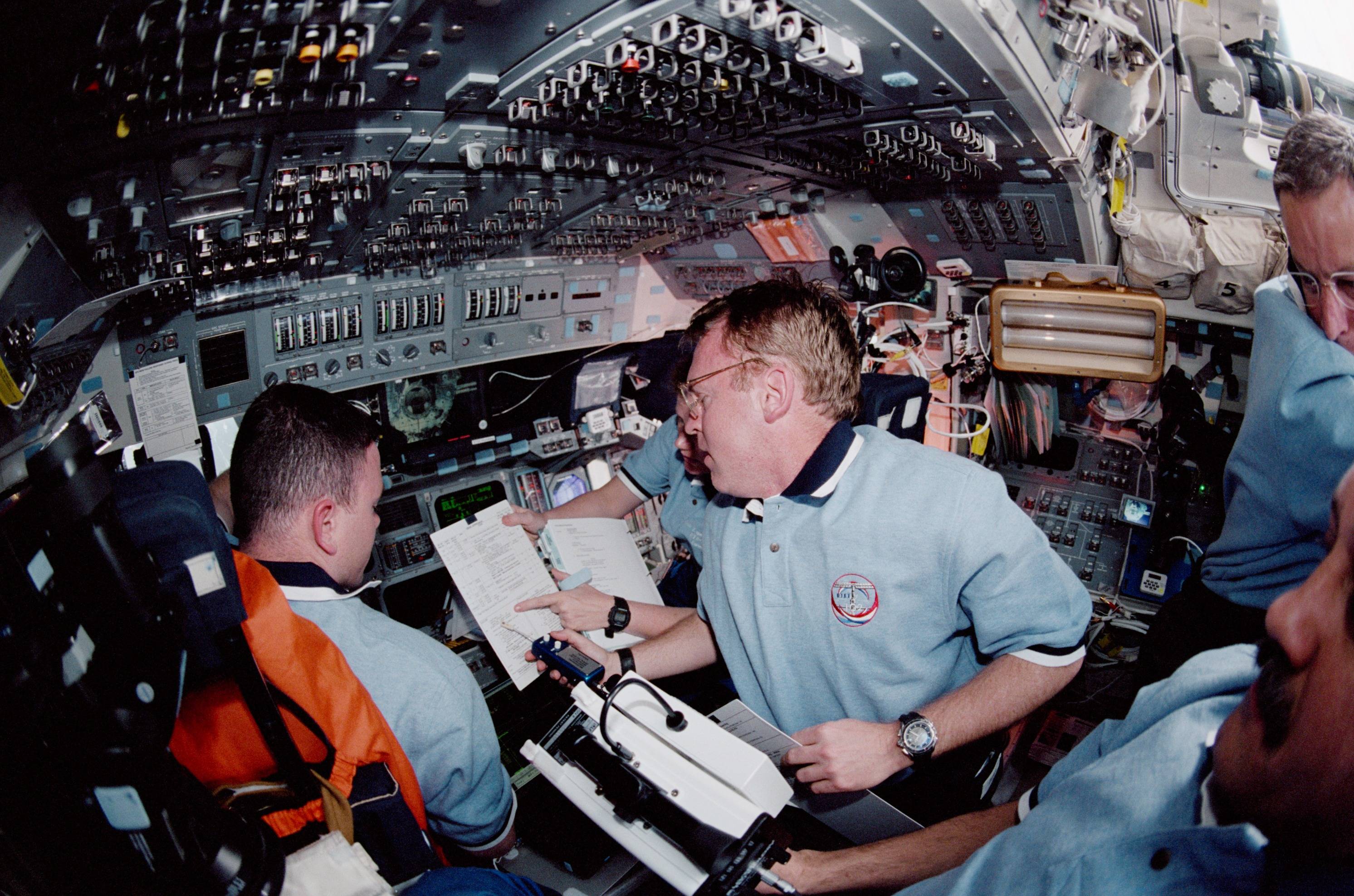 AOA - Abort Once Around

PDF copies of many of the books listed can be found at the JSC FDF page.

In the mid-1990s, I was part of a team that deployed Hyperman to all the FCRs, POCs and on the shuttle laptops. MOD called the project EDP. The goal was to reduce the 400-800 lbs of paper being carried on each shuttle flight as much as possible, by using a faster reader than Adobe Acrobat. Acrobat Reader was slow and didn't have cross-book search at the time so we implemented that in EDP.

Human factors made EDP difficult to retain for many needs for the flight controllers on the ground. They demanded paper, so their sticky notes and shared team knowledge for each system was inside the paper books. We'd implemented annotations which supported doing everything you would do with a paper document, plus running external tasks, but that wasn't the same. We implemented publish/subscribe for all annotations so people could get a copy of each other's annotations too. Human factors deemed that wasn't sufficient. They'd rather spend 30+ minutes every month manually swapping out page updates than just have the document swapped electronically, all their annotations correctly placed and working. Whatever. I'm not bitter. ;)

EDP flew on a number of shuttle missions.

After the deployment project was finished and my development contract was up, I left JSC for a completely different industry, but heard EDP was still being supported at least until 1998. It may still be going on the ISS today, but I don't know.

Adobe has made great strides with their library management, annotations, and search capabilities the last 20 yrs. As a taxpayer today, I'd want COTS to be used for this need. A good librarian can make access to complex engineering documents very good.

But there are times when I'd want paper, in my hands, during critical flight regimes, for system problems that could end my life in the next 5 minutes. OTOH, if I need to fix the toilet or some other less immediate system documentation, having 2TB of PDF files on 3 laptops would be preferred. Plus, there is velcro all over those vehicles, so attaching the laptop to a wall while you are working isn't the hardship it would be on Earth.

The shuttle is 1000x more complicated than Soyuz. There will be many more manuals. Many.

Not the answer you're looking for? Browse other questions tagged space-shuttle soyuz-spacecraft procedure or ask your own question.

15
How fast can the crew evacuate the ISS? (ACRV)
11
Flashing lights on soyuz underside?
15
How many people have returned to Earth in a different type of vehicle than the one that launched them into space?
12
Did all of the Space Shuttles dock with multiple space stations or crewed spacecraft?
22
How many times were there thirteen people inside the ISS? Is it hard on the station?
9
Why didn’t the Space Shuttle’s engine-out checklists include steps for attempting a relight?
12
How was the Space Shuttle Orbiter used for ISS Reboost?
6
What were the space shuttle’s emergency procedures for an SRB or ET separation failure?