@Fred's comment links to the Curious Droid video How Australia Helped Save Apollo 13 and a little after 02:15 and 03:00 it shows images of dish antennas presumably at Australia's Honeysuckle Creek station. It's possible these are two photos of the same antenna on different dates, but I'm not sure.

Is it possible to explain what these three components are, how they work and why they have their distinctive shapes?

The honeysuckle-creek tag links to other posts which may contain helpful links. 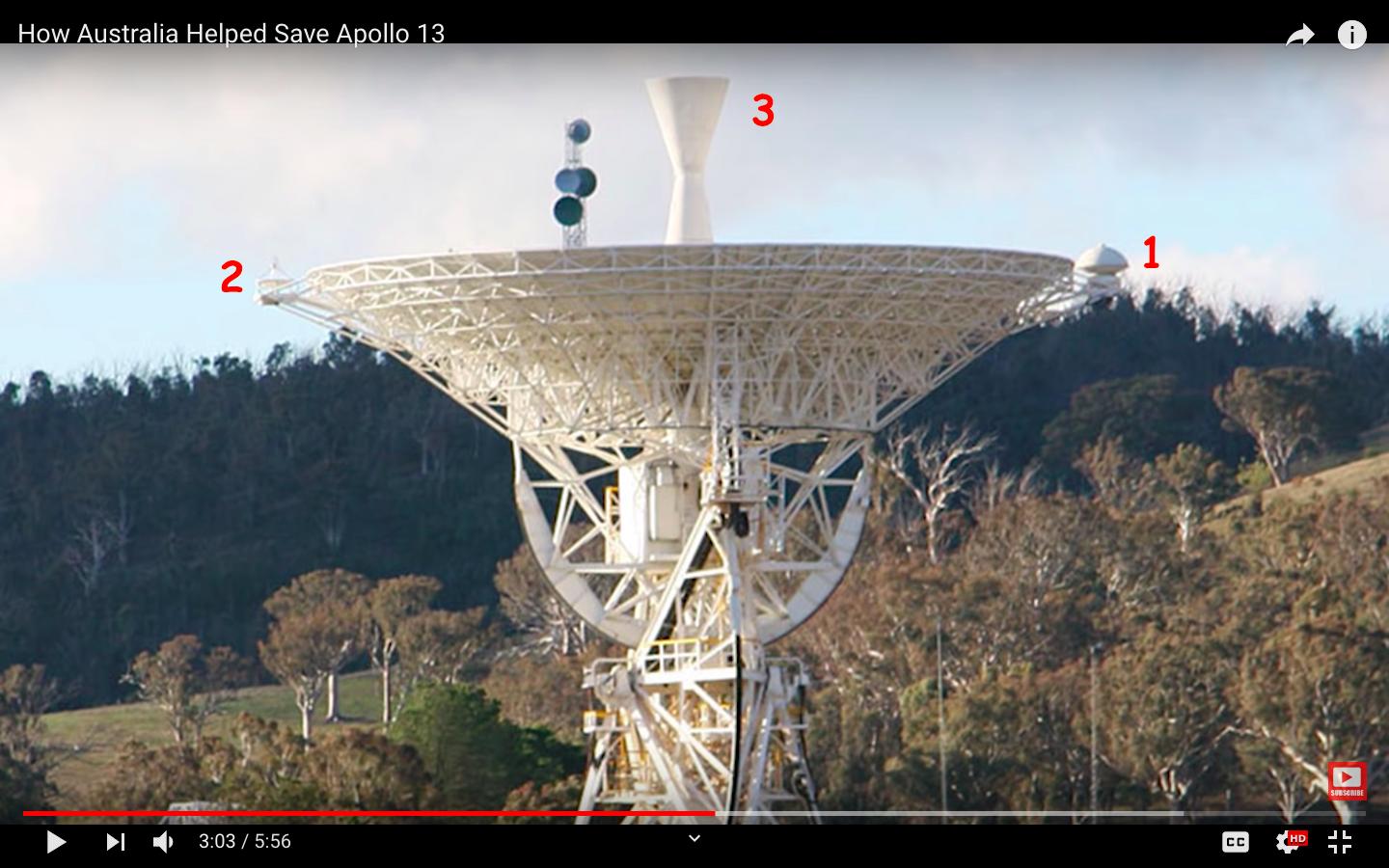 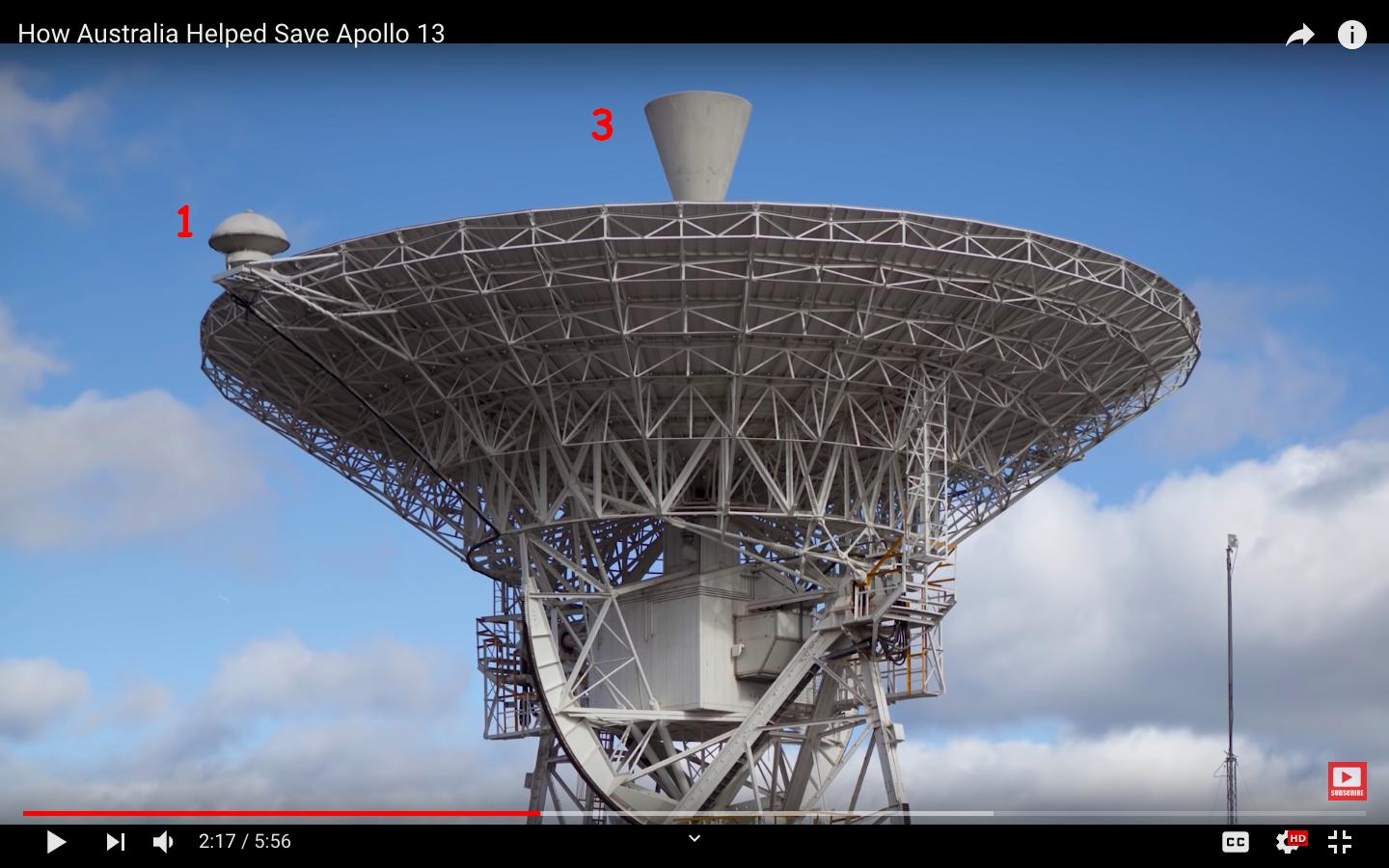 The photo you have is of DSS-46, which is actually at Tidbinbilla. It used to be DSS-44 at Honeysuckle Creek, but when that site was closed in 1981 the antenna was moved. When it was re-assembled in 83, a new self-supporting secondary reflector replaced the old quadripod (source).

Here's a better photo of that bit: 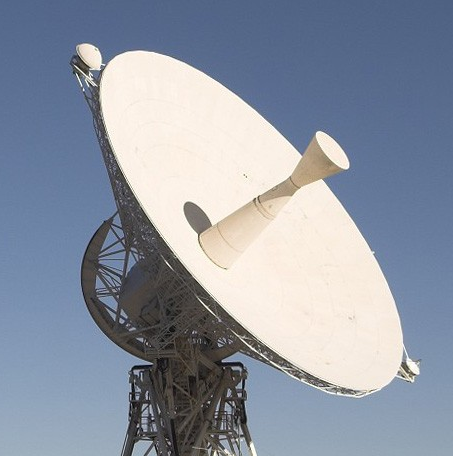 And here's comparison with an older feed on the antenna: 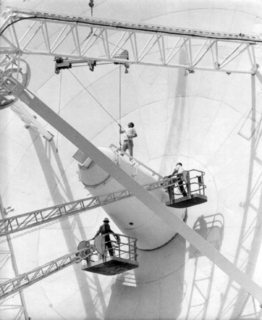 (The feedcone is changed during Apollo 8, photo by Alan Foster)

You can sort of see that if you just sliced off all the quadripod bits and kept the secondary reflector and mounted it to the end of the feedcone by a minimal bit of some suitably radio-transparent composite, you'd end up with the biconic structure you're asking about. Nothing mysterious there, at least.

There's a commercial example here for a much smaller antenna: 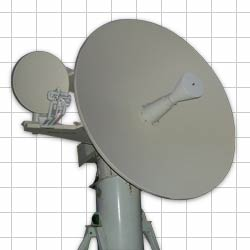 The subreflector for the 8 ft. Cassegrain feed is supported by a thin wall fiberglass cone which attaches to the short aluminum conical support structure that supports the feed system. The resulting 8 ft. monopod feed support is very stiff, with a very high resonant frequency.

I haven't searched further to find out whether "monopod" or "self-supporting" is the preferred term. I'll leave that as an exercise for the reader.

According to the Canberra Deep Space Communications Complex page, the antenna was "modified to expand its capabilities for early launch acquisition", though it doesn't go into detail. This entailed getting rid of the old S-band acquisition antenna that sat on the end of the quadripod, and replacing it with new gear. The CDSSC page simply states that it the antenna now has an S-Band Acquisition Aid (2200-2300MHz) and an X-Band Acquisition Aid (8400-8500MHz), which will be the two little antennae stuck on either side. I'm not sure which is which, yet.

There's a nice high-resolution image of the dish here (credit: Phil Maier) from which I've grabbed these little details:

which looks like a fairly boring and conventional parabolic-plus-quadripod jobbie, and 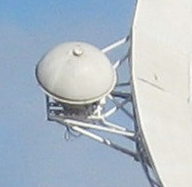 which apparently has a radome, for some reason.

A quick rummage through an image search for S- and X-band antennae didn't turn up any examples of S-band devices with radomes . A few X-band examples do, but they seem to be radars rather than merely acquisition antennae (such as this one: XPOL). Presumably it isn't necessary here, either (as the other acquisition antenna lacks one) so maybe it just came stuck to an off-the-shelf commercial unit that suited the operators.

Not the answer you're looking for? Browse other questions tagged apollo-program antenna honeysuckle-creek australia or ask your own question.

3
First radio contact between an Australian and a spacecraft? First voice communications?
4
How many people spoke to Apollo 8 from outside the US?

3
How does this strangely-shaped horn at Honeysuckle Creek Tracking Station work?
1
How does this antenna work, with both a feed horn and hyperbolic secondary in front of the dish?
6
Apollo Mission Control Room 2, how do these decimal number displays work?
18
How do these cubesats' whip antennas work?
3
How does this large, flat antenna made from overlapping circles at Australia's Carnarvon Space Tracking Center work?