Do astronauts develop the ability to regularly place an object at rest inside the ISS after extended periods in microgravity?

This image from the ESA 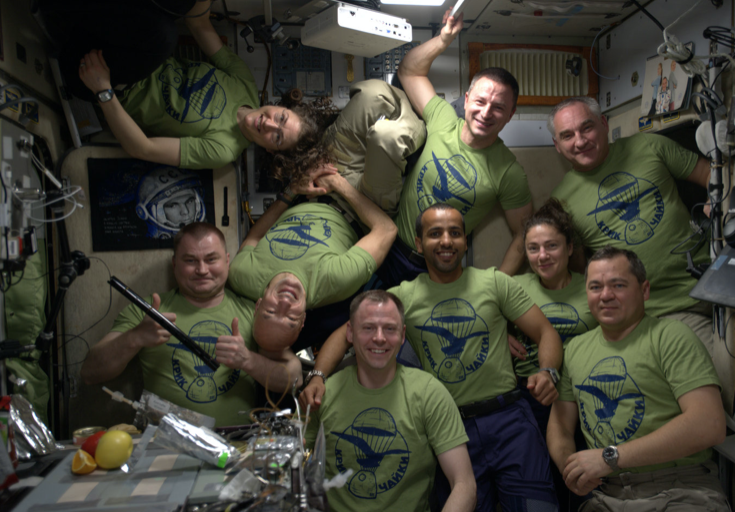 prompted the question why the fruits at the bottom left were not floating. An online response claimed after an extended time on the ISS astronauts get used to placing objects in a stationary position. Is there any truth to the claim that astronauts living in ISS "learn" to position objects so they remain stationary with respect to the station itself?

After spending several evenings and going through many dozens of web pages whilst searching for the answer to this question, I couldn't find any definitive claims or quotes that would suggest that such an ability (to regularly place objects at rest on ISS) is common.

In this regard, I believe that it would be very hard to obtain a definitive answer in any other way than asking directly the person on reddit (who was claiming "astronauts tend to get used to managing to put things stationary") what was the exact source of that claim.

Instead, I was able to find many pages quoting various astronauts suggesting that on ISS pretty much everything has to be attached with the use of velcro/magnets etc.

In order to put something steady, it is safe to assume that an astronaut doing this would need to be as steady as possible themselves.

This article, describing importance of person's stability whilst using a sextant on ISS , suggests it's not so easy:

It's especially tricky because astronauts are hardly ever stationary — they float around, so it's hard to stay stable.

I've found two sources citing astronauts who (whilst being in orbit) developed a contrary automatic habit to attach items:

Even the sensation of gravity holding me in my chair [being on Earth, after the space flight] feels strange, and every time I put a glass or fork down on the table there's a part of my mind that is looking for a dot of Velcro or a strip of duct tape to hold it in place.

2) Although not directly related to ISS (perhaps related to his mission on Salyut station), this article (in Russian) is citing experience of cosmonaut V. Sevastyanov (В.Севастьянов):

Very soon you begin to attach things completely unconsciously, and when you return to Earth, you cannot get rid of this no longer necessary habit for a long time. At one of the first lunches after landing, I suddenly found myself holding a fork, knife, bread, spices and several other items between my fingers.

The following articles suggest that everything should be securely attached:

So, to sum up, all the anecdotal evidence quoted above suggests that even if some astronauts develop the ability to put objects at rest/stationary, this doesn't seem to be very useful/practical for a long-term positioning of objects.

And if they do, I could think of only two reasons why:

a) to put various food items as close to stationary as possible (for a short time, i.e. few seconds) whilst eating, for their personal convenience, as shown in this video, or for some similar occasions;

b) for fun (as possibly happened for taking the photo with fruits on the table).

Not the answer you're looking for? Browse other questions tagged iss astronauts microgravity or ask your own question.

15
How is lower/no gravity simulated on a planet with gravity, without leaving the surface?
14
Is there an upper limit for the internal size of space stations?
8
Does trajectory of an object orbiting a planet depend on the object's mass? (With hypothetical Apollo example)
10
How big are the tidal accelerations within the ISS?
3
What is the most massive object in the ISS whose position was altered by the circulating air?

1
Were there special circumstances leading to these astronauts' spacewalking 5 days after arrival at the ISS?
7
Do astronauts on the ISS ever secure unpressurized cargo with an EVA to then be brought inside through an airlock?
4
Does extended microgravity increase the rate of kidney stones in astronauts? Do these lead to medical complains/discomfort while still in space?