Is it possible to create a cycler that can travel from Venus to Mars, then back to Venus? Using as little delta-V as possible.

To expound a bit further, it would need to travel from Venus to Mars with a 1,000,000kg(1000 tonne) payload, but travel from Mars back to Venus would not have any payload at all.

Would light-sails be a practical propulsion method? And is it possible, with near-term technology(super-heavy-lift rockets, more efficient solar panels, ion engines, etc...) to build a fleet of them(like 12 of them), constantly moving between Venus and Mars.

Is it possible to create a cycler that can travel from Venus to Mars, then back to Venus?

Yes. When only two planets are involved, there are several infinite families of cycler orbits.

Given the 434 day long orbital period of an ellipse touching both Venus and Mars is almost twice as long as the 225 days orbital period of Venus, it's even possible to construct a cycler that has a Mars-Venus transfer leg directly after a Venus-Mars transfer leg. The extra two weeks are trivial to make up for with a slightly higher apoapsis and the bending angle of the Venus or Mars flyby.

It should also be possible to use the cycler quite often, since the ratio of the Mars-Venus synodic period and the orbital period of Venus is 1.485, making the the angular difference between every other planetary lineup very small. (within what the flybys can make up for).

Using as little delta-V as possible

The cycler itself would not need to change its velocity. Accelerating up to, and down from, the cycler should be very comparable to a regular Hohmann transfer due to the very similar shape of the cycler orbit.

Note that no cycler save any transfer delta-v

Payloads are not relevant to cyclers. Cyclers are not a more efficient way of moving cargo. They are a reusable orbital "home", so you don't have to accelerate and decelerate your shelter for every trip.

Would light-sails be a practical propulsion method? And is it possible, with near-term technology(super-heavy-lift rockets, more efficient solar panels, ion engines, etc...)

For the general problem of moving cargo between Venus and Mars however, which sounds like the problem you are actually trying to solve, low-thrust propulsion is a viable alternative.

An explicit cycler solution. (many others are possible);

After 4 synodic periods of Venus and Mars, the planets line up 21.3 degrees earlier.

From that, we can calculate an angular distance between inbound and outbound Venus orbit crossing to be 21.3 degrees.

The Mars-flyby in-between picks a high altitude, to not alter the orbit significantly.

The inbound Venus flyby places the cycler into a storage orbit exactly double the orbital period of Venus (449.4 days) (Only requires a very gentle flyby angle since we're already close to that).

After two orbits in this storage orbit (898.8 days), the new Venus flyby is now the outbound flyby, and the process repeats 21.3 degrees shifted.

Or as a timeline:

This pattern keeps repeating itself, since every cycle rotates this by 21.3 degrees, the same as the angular shift of the Mars-Venus synodic lineup. 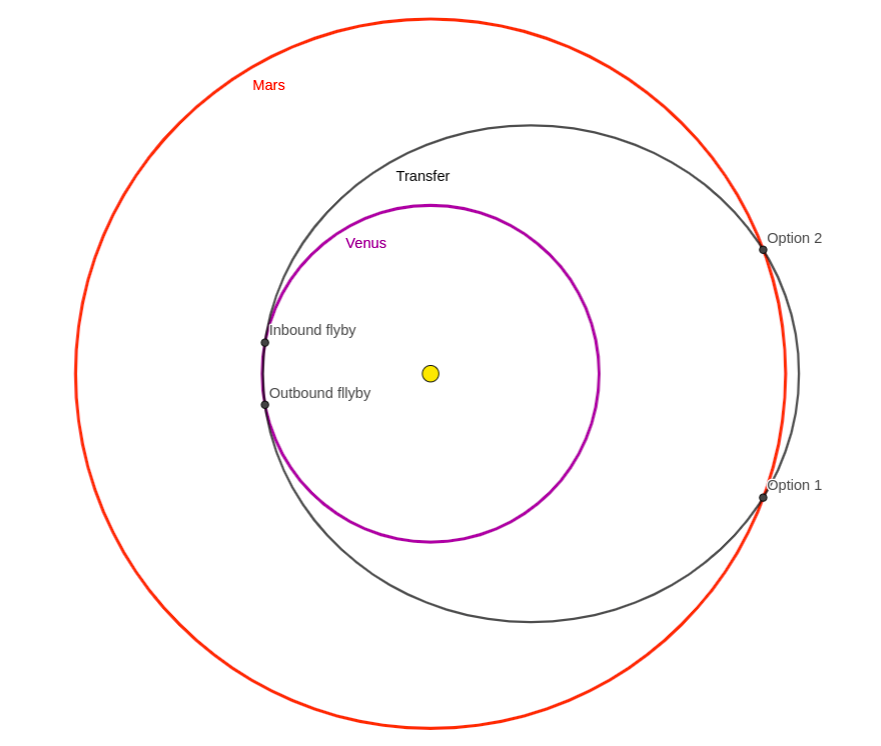 Not the answer you're looking for? Browse other questions tagged mars venus low-energy-transfer phobos deimos or ask your own question.

31
Why not travel to Mars in 2 months?
38
What uses would the Aldrin-Cycler have?
1
Could e-sails provide safer space travel
6
What are the most difficult challenges SpaceX will face getting astronauts to Mars by about 2025?
8
Could a spacecraft be put into such an orbit that it would alternately slingshot around Mars and the Earth?
0
Could a reentry powered monorail and flywheel make a kinetic engine for lift?
2
Is a Mars return mission by Starship possible without local propellant production, given the current specifications?
4
Does Starship reuse actually serve a purpose for Mars, or only LEO/Earth-to-Earth?
5
How did the Venera Probes manage to safely descend to the surface of Venus?