What is a lithium fed GIT? How does it work?

This answer to What is the maximum speed an ion engine can propel a spacecraft at? mentions the following:

The second set of numbers is the exhaust velocity, and so it looks like those are for an acceleration voltage of about 20 kV.

Lithium has an advantage of being a light atom; for a given acceleration voltage and singly charged state, the specific impulse varies as $1/\sqrt{m}$. While iodine can be sublimated at a low temperature, I suppose the lithium would have to be heated significantly. Either way, solid sources don't require heavy pressure vessels like gas sources do (e.g. Kr, Xe).

But how does a lithium fed GIT (gridded ion thrusters) actually work? Is the source pure lithium metal or some compound? How is it fed into a plasma, or is it ionized in a different way? (e.g. field emission or contact with a different material that wants electrons more?)

This seems like a relevant paper from 2017: Development of a 50,000s, Lithium-fueled, Gridded Ion Thruster. 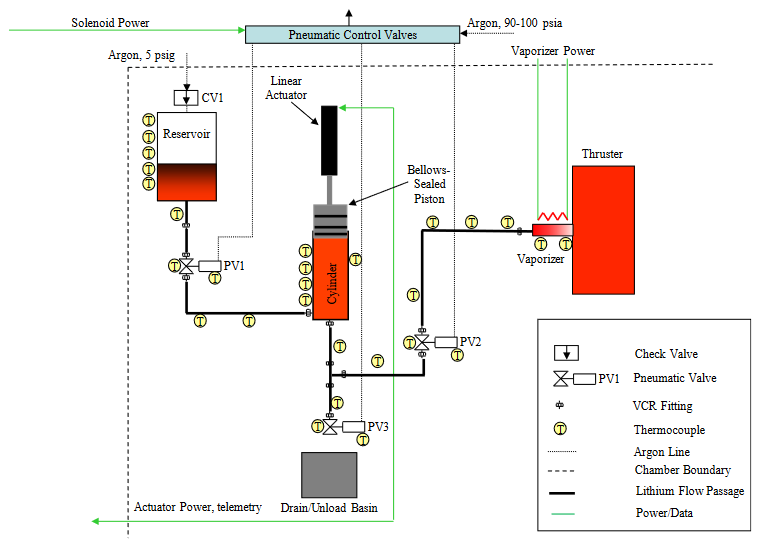 Diagram shows a laboratory setup, so not something that will actually fly. I found no examples of those. Details are not given for how an actually deployed system might differ. It looks pretty much like a lab setup described in 2001 paper, Lithium Mass Flow Control for High Power Lorentz Force Accelerators and so probably represents "state of the art" for lithium ion engines. In future there's intent to use a pistonless system and electromagnetic pumping: Electromagnetic Pumps for Conductive-Propellant Feed Systems which should avoid some of the issues with trying to wrangle liquid lithium which has a depressing tendency to corrode mechanical systems. Note the thermocouples on all the valves, which aren't just there to melt frozen lithium in a cold system, but also to deliberately freeze liquid lithium in closed valves to help stop the stuff oozing out and ruining everything.

So, lithium is stored as a solid, melted and fed into a controlled supply cylinder, which then feeds it into a vapourisor, which then feeds into what looks to my thoroughly untrained eye like a more-or-less standard electrostatic gridded thruster, using a ring-cusp discharge chamber, though the diagram quality is rather low so I won't repeat it here.

This design (apparently dreamed up in the 80s, so it is surprisingly old!) was used in the NSTAR engine (which propelled Deep Space 1 and Dawn) and NEXT design. Those used xenon propellant, but the design apparently works well enough for anything that you can pump in as a gas, as it has been used with argon and lithium-fuelled test models, too. I found a 2005 dissertation Dicharge Plasma Processes of Ring-Cusp Ion Thrusters which has this handy diagram: 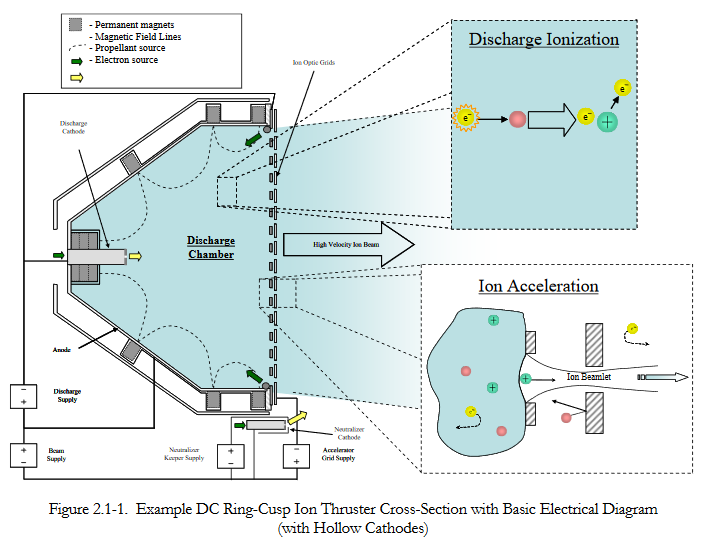 Gaseous propellant is blown into the discharge chamber through a hollow cathode (and a couple of other places). Electrons travelling between the cathode and the anode formed by the chamber wall ionise the propellant. Apparently a potential difference of a mere 25 volts is enough for this. A larger voltage drop (1000V would be required for 50000 seconds performance) between the chamber and the grid accelerates the positive ions out of the business end of the thruster.

As this seems to be a fairly standard ion thruster design, there's lots of other papers out there about it, such as this one: Ion Propulsion: An Enabling Technology For The Dawn Mission with similar diagrams and explanatory text, if more information was needed.

Not the answer you're looking for? Browse other questions tagged physics ion-thruster chemistry or ask your own question.

9
Using water as a high density storable hydro-lox propellant
4
What is the maximum speed an ion engine can propel a spacecraft at?
3
Orbit transfer trajectory options to the moon
2
Solid metal fuel for nano satellite thrusters

4
How do jetpacks work in space?
5
How much energy does it take to extract water from silicate?
2
MARS-CAT; What is a Cubesat Ambipolar Thruster and how does it work?
1
How does a "hybrid orbital raising system" based on R-4D (N2O4/MMH) + SPT-100 (Hall effect) work exactly? (Intelsat 38 & 39)
7
Have light gases like hydrogen or helium been explored for ion propulsion?