Why are we interested in visiting the giant planets' icy moons?

I have noticed lately that future missions by NASA and ESA are targeted towards the moons of Jupiter and Saturn. They mention that they might be a possibility of life; the icy moons they are focusing on are Europa and Titan.

Examples of these missions are the Europa Clipper mission, the Dragonfly mission to Titan, and the JUICE mission.

I was wondering what are the main driving factors that has lead to start projects and missions to the icy moons? Not necessarily the ones I mentioned but why is there a sudden interest to the icy moons? (e.g., is it driven by the search for life? Or is it following the water?)

The icy moons are of interest for exploration as part of the overall "follow the water" strategy of exploration that NASA (and others) have been exploring for some time. The "where else can water be found" is a major question in e.g. the US Planetary Science Decadal Survey (which is a community-driven consensus document which outlines the questions of interest and the mission priorities for the next decade), ESA's Cosmic Vision 2015-2025 and the NASA Planetary Science "Big Questions" overview.

The "Roadmaps to Ocean Worlds" team (public overview here) laid out the goals of the ocean worlds program in 2018 and the overview graphic sets out the motivations and the path forward: 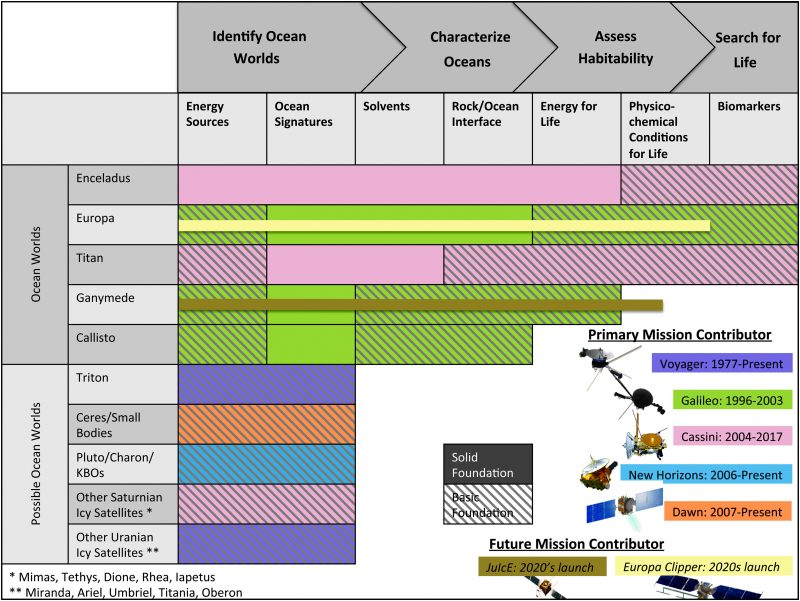 So the main targets are Europa, Ganymede and Callisto (icy moons of Jupiter) and Enceladus and Titan (icy moons of Saturn) with other "honorable mentions" for Mimas, Triton and Pluto and Ceres as detailed a little more in this NASA JPL infographic. Most of these destinations are in the "Characterize Oceans" and "Assess Habitability" stages of needing new missions, instruments and data to guide the future search for life.

Ocean Worlds destinations were added, somewhat controversially at a late stage, to the NASA New Frontiers 4 competition for mid-size missions (cost cap ~$900M; NASA New Frontiers program page) which was subsequently won by the Dragonfly mission which will go to Saturn's icy moon of Titan. Europa is the target of the NASA Europa Clipper mission which has followed a separate path of development, in some part at the urging of former Representative John Culberson, and ESA's JUICE - JUpiter ICy moons Explorer -mission, which will study Ganymede, Callisto and Europa (along with Jupiter itself)

The motivation is the growing understanding, from the Voyager, Galileo and Cassini probes, that these icy moons (I'd throw in Enceladus) are geologically active with sub-surface oceans of liquid water, along with the realization (from studying the Earth's ocean vents and deep biosphere) that life can be sustained from the energy of geologic processes, not just the solar energy impinging on the surface.

The combination of liquid water and available energy beneath the surface of these moons make them an intriguing place to look for extraterrestrial life.

One of the reasons is that the Cassini mission ended on September 15, 2017, and Juno around Jupiter isn't exploring its moons, as far as I'm aware.

So currently we have nothing around Saturn and Jupiter that would explore any of its moons.

Not the answer you're looking for? Browse other questions tagged interplanetary jupiter titan europa dragonfly or ask your own question.

13
How are space agencies coordinating their science missions internationally?
1
Does the Dragonfly project (quadcopters on Titan) envision attached RTG's or would they be static and revisited for charging?
14
Why are planetary probe RTGs tilted at a jaunty angle?
7
How can they be so sure that Dragonfly will "freeze to death" as opposed to simply (and eventually) running out of RTG power? (238Pu decay)
9
What is the pop-up circular disk with spiral pattern in this NASA animation of the Dragonfly helicopter for Titan? Antenna? Kind, band, target?
9
How do they know that the Dragonfly helicopter won't get quickly coated in tholin muck? Any desliming technology for camera lenses or propellors?
15
Why aren't there any robotic missions on Europa or Enceladus?
3
Is the available imagery of Europa and Enceladus enough to develop surface missions there?