and the acceleration components (gradient of this potential) are:

From Geopotential model and this answer.

I've plotted $u$ and $|\mathbf{a}|$ below for the $xz$ plane, where $z$ is Earth's rotational axis. The distribution in three dimensions is simply this rotated about the $z$ axis.

Question: $J_2$ is the dominant part of Earth's quadrupole moment, but it's only one component.

Does J22 represent the rest of Earth's quadrupole moment?

With a more usual notation ldegree, morder, there are the zonal l2m0, tesseral l2m1 and sectoral l2m2 spherical harmonics, but you probably already know.

What does J22 look like? What is its shape and symmetry? 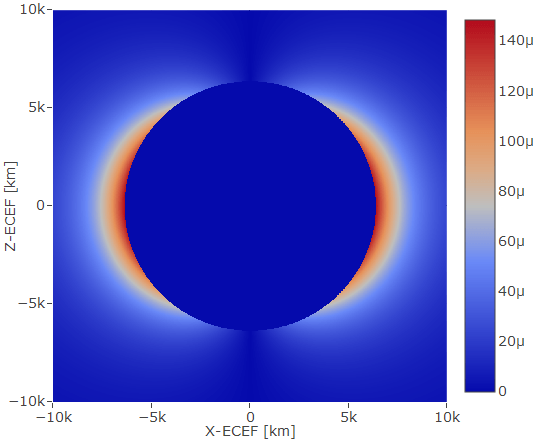 For comparison, here's what I get for your "acceleration magnitude" graph (l2m0) (it's not clear what 800 represents): 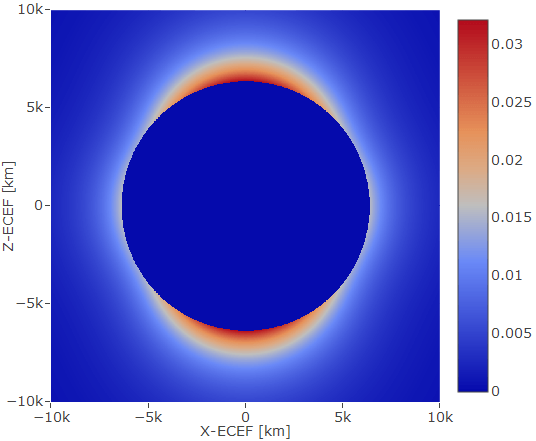 Wikipedia actually goes into some detail regarding the components of Earth's gravitational force field.

In the Wikipedia reference we do not have $J_{m,n}$ for $m>n>0$. Rather this term is broken up into a cosine component $C_n^m$ and a sine component $S_n^m$. This table gives results from one on a series of models called the JGM models, developed by the Goddard Space Center:

Here $D$ means multiplying by a power of ten whose exponent follows, thus $D-05$ means multiply by $10^{-5}$. The absolute values of the numbers above represent the relative strength of the gravitational potential arising from the spherical harmonic component, at a distance equal to the average radius of Earth and with the isotropic, "spherical mass" component (which would be $J_0$ in this nomenclature) scaled to $1.0$.

But that is not the whole story. While the remaining quadrupole component is tiny near Earth's surface, some higher order polar components ($n\ge 3$) are not. If you are including the $(2,2)$ components of the quadrupole to model your low Earth orbit motion, you should also include at least the similarly sized $(3,0)$, $(3,1)$ and $(4,0)$ terms in order to really imprive your accuracy over the rotationally symmetric quadrupole. The deviations ftom a ritationally symmetric quadrupole are more complex than just an additional quadrupole component.

The reason for this is that the deviations from a rotationally symmetric quadrupole are governed by the distribution of large-scale geographic features such as mountain ranges, basins and tectonic subduction boundaries. Such features on Earth are too complex to be captured by one or two spherical harmonic components. If you need to capture the geological complexity of Earth to model your satellite, you will need plenty of spherical harmonic terms to do it.

You can simplify things if you are instead launching your satellite to a high altitude, say a geosynchronous orbit. The components with larger $n$ values fade more rapidly with distance than those with smaller ones, so depending on the accuracy you need you may drop out those $(3,m)$ and $(4,0)$ components. The geographical warts we see up close get smoothed out with a more distant view. That is where you are most likely to succeed with just $J_2$, $C_2^2$, and $S_2^2$.

Earth is not the only body with such gravitational complexities. Any ostensibly hydrostatically equilibrated, but solid, body will likely have its own geographic rough spots. Mars, in particular, has the large altitude difference between north and south, the Hellas Basin, and Olympus Mons. If we want to track a Mars orbiter with high accuracy, we had better brush up on our spherical harmonics.

Not the answer you're looking for? Browse other questions tagged gravity physics mathematics earth or ask your own question.

9
How to calculate the planets and moons beyond Newtons's gravitational force?
4
Is Earth's "pear shape" mostly J₃?
4
What is the sign of Earth's J2?

3
What would it look like to shatter a glass or break similar material in Zero Gravity?
8
What does the exhaust plume of a rocket look like in vacuum?
31
What does the Sun-Earth-Moon system look like from the Sun-Earth L-2 point?
1
How to calculate Earth's velocity vector in ECEF?
6
What would a candle flame look like in low gravity?
2
At a height of 100 km, what speed do you need to be going to escape Earth's gravity?
8
Zonal vs Tesseral part of geopotential?