What does "MSR" represent in the context of this predicted satellite conjunction?

The image from one of the tweets is shown below. In addition to the two trajectories intersecting over the northeast US (Pittsburgh, PA) there is a highly elongated arc over Baja California, northwest Mexico and Texas of concentric narrow ellipses labeled "MSR".

Question: What does "MSR" represent in the context of this predicted conjunction? Is it related to the conjunction itself? If so, why is it shown so far away from the intersection of the two trajectories? 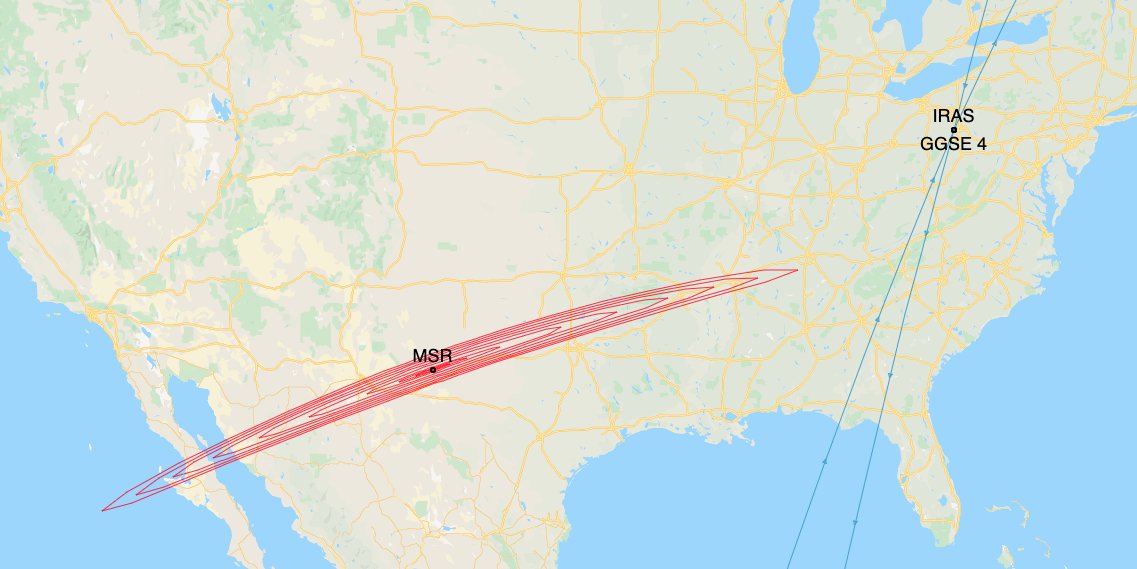 MSR is one of LeoLab's radar stations (LeoLabs being the people who tweeted about the potential collision, a company whose busines is monitoring satellites). It lives in Midland, Texas, and as such is called the Midland Space Radar. I'm not sure what the contours show, but they're presumably related to the region that the radar can observe.

24
How did two satellites end up in almost the same orbit except moving in opposite directions?
1
How does one use the Surveillance Fence feature in keeptrack.space?

22
What is the probability of impact?
19
How accurately (maximum possible accuracy) can future satellite positions be predicted?
14
What are these air-vent-like structures on this satellite?
9
What just happened? What does this satellite breakup announcement mean? What does it suggest?
6
What's the spiral pattern on this satellite?
1
Why does this satellite collision debris field look like a big "X"?
24
How did two satellites end up in almost the same orbit except moving in opposite directions?
16
What does the [-] symbol mean in satellite names?
25
Is it normal for the US Space Force to warn companies about a possible collision (conjunction)?
4
What does 'a nudge' mean in the context of rocketry?