These engines were derived from the Navaho program and were used on the Thor/Delta, Jupiter/Juno II, and Atlas I families of launch vehicles. All were ground-lit only, but by what mechanism were they ignited? How difficult would it have been to modify them for air-ignition?

The LR-79 engine for the Jupiter used pyrotechnic charge ignition, both in the main chamber and the gas generator. These charges ignited small torch igniters which used propellants from a supply system external to the vehicle.

When the main missile propellant tanks are pressurized to approximately 40 psi, a signal is given to pressurize the ground-mounted fuel and liquid oxygen start tanks. Pressure switches in these tanks "pick up", closing a circuit which fires a pyrotechnic igniter in the main chamber. Burn-through links in this igniter then signal for the liquid oxygen valve and the igniter fuel valve to open. The pilot flame which is produced burns through a link wire stretched across the thrust chamber nozzle. This signals the two gas generator igniters to fire. Again, burn-though of links in these igniters signals the opening of the main fuel valve and the gas generator valve. Fuel and liquid oxygen from the ground start tanks start flowing under 65-lb pressure into the gas generator, burn and produce gases which accelerate the turbopump.

Source: Rocketdyne report Development of the Rocket Engine for the Jupiter Missile

This ground-based ignition propellant supply of course wouldn't work for an airstart, but later versions of the engine appear to have moved the start tanks into the vehicle. 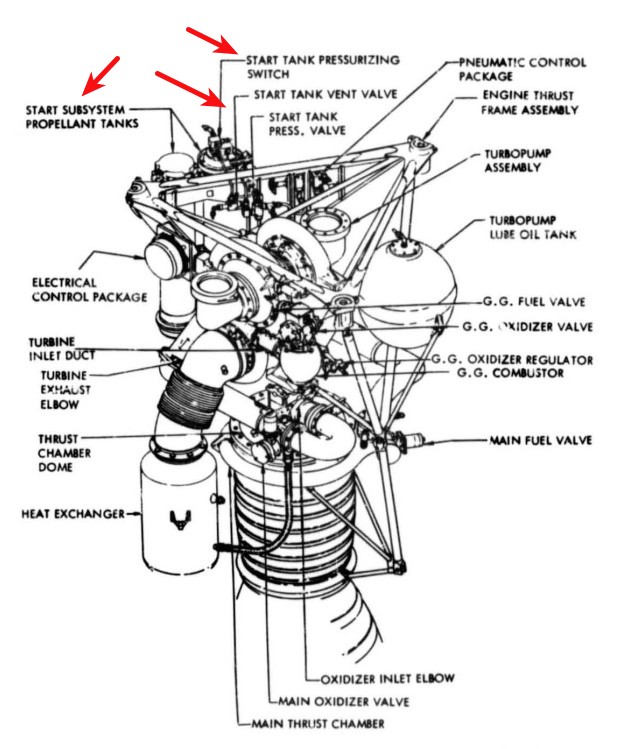 Those start tanks aren't shown on the drawing in the Rocketdyne report linked above. 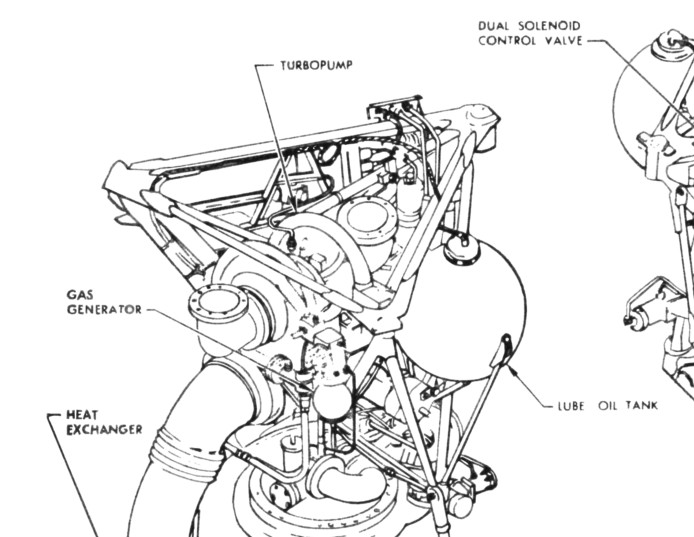 I haven’t found anything authoritative, but a couple of references suggest that solid fuel igniters were used on the Atlas engines. http://www.rrs.org/tag/lr105-na-5/

In the 1950’s, there was a concern about reliably igniting the second stage engines in the thin atmosphere at high altitudes. To counter this, the engineers at Convair devised a vehicle that would use a single set of RP-1 and liquid oxygen (LOX) tanks and rapidly ignite all three engines with pyrotechnic cartridges at the same time on the ground.

As far as I know, these would work just about as well at altitude as they did on the ground, so there’s no real adaptation needed for air-start; it’s just that if an engine fails to start on the ground, you can safely turn everything off and try again tomorrow. This is why Atlas was designed to ignite the sustainer on the ground.

Not the answer you're looking for? Browse other questions tagged engines or ask your own question.

16
Were the Space Shuttle's Main Engines ever off while the Solid Rocket Boosters were firing?
4
How are rocket propellants ignited repeatedly without the ignition source melting
6
Why did the manned Mercury-Redstone flights carry and use retrorockets?
3
Are there any rocket engines in current or former use that aren’t normally restarted in flight, but have the capability for an emergency restart?
43
Why were the Space Shuttle's main engines placed on the orbiter?
5
Why were later Russian engines inferior to the NK-33?
4
How many Lunar Module Ascent Engines were produced? How many still exist?
3
Can Falcon 9's engines be ignited more than 4 times if there is enough TEA-TEB?