Is there anything fundamentally wrong with 'autogenous expander cycle`?

This question is a spinoff from here.

To set the context, here is my understanding of the expander cycle:

The cycle works pretty much in the same way as the open dual expander cycle - but instead of discarding the output of the turbopumps, the propellant is returned to its respective tanks.

As the propellant returns back to the tanks, most of it condenses back into a liquid form as it comes in contact with the subcoold propellant remaining in the tanks (I understand that this is what happens in plain autogenous pressurization as well). Different methods of injecting the propellant back into the tanks can be used to control the rate of condensation.

The last point is true only while there is a lot of propellant still left in the tanks - but won't be true once the tanks are almost empty. At this point, the exhaust of the turbopumps would need to be largely discarded - as in the regular open expander cycle. 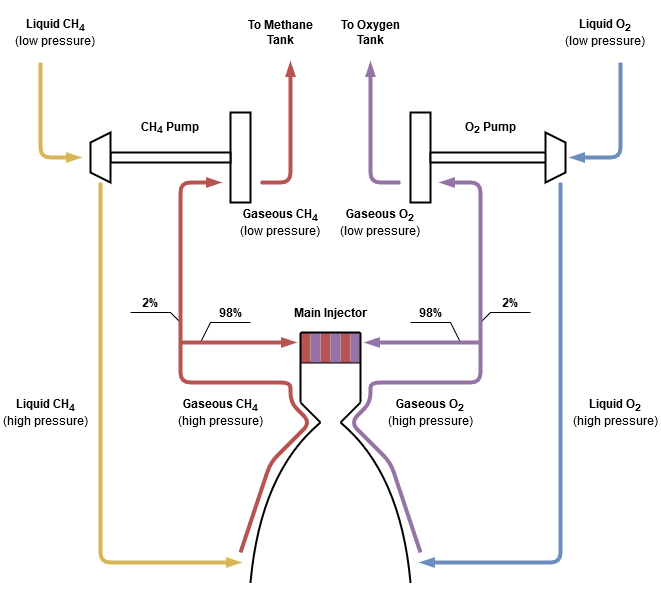 Based on the discussion in the comments and on some additional research, I'll try to answer my own question:

The design, at least as is, does not seem to be workable.

First, while it takes only 2% of propellant mass to run the pumps when the working fluid is hydrogen, it will take much more than 2% for other fluids. Based on my rough calculations, it would take 10% - 12% of methane, and 8% - 10% of oxygen to run their respective pumps. One other potential fuel to use might be propane, but I got conflicting numbers trying to calculate how much propane would be needed to run the pumps.

Second, pumping around 10% of propellants back to the tanks will affect the temperature of the tanks significantly. In fact, in case of methane or hydrogen, it will actually vaporize the propellant in the tanks. For oxygen, it will get it very close to the boiling point (though, as long as you pump less than 12% back, oxygen shouldn't vaporize). For propane, it shouldn't be a problem since propane has a very high boiling point (231K) - but again, not sure how much propane needs to be pumped back for the scheme to work.

Another potential issue brought up in the comments was that cooling the propellant once it returns to the tanks will be difficult. I don't believe that's a fundamental problem and can be addresses in a number of ways (e.g. releasing the gas close to the bottom of the tanks and let it cool as it bubbles up) - but I don't have a definitive proof for this.

To sum up: this design will not work with fuels like hydrogen and methane. It might work with propane but even then, probably would not be the most efficient way to use heat energy. This is probably why it hasn't been used anywhere.

Not the answer you're looking for? Browse other questions tagged engines engine-design design-alternative or ask your own question.

4
In turbopump designs where no propellant is dumped overboard what causes efficiency loss in engines?
5
Is it possible to keep fuel and oxidizer tanks pressurized during flight by heating up their contents using exhaust gases?
2
In the context of calculating mass flow rate from thrust and Isp, how would an additional efficiency be defined?
10
Why don't all SSME turbopumps gimbal with the engine?
16
Why aren't expander cycle engines used on lower stages?
5
Why don’t any engines use turboelectric oxidiser pumps?