Are fans ever used in un-crewed spacecraft?

The question For a Venus bound space probe could could a fan be used to prevent overheating? got me thinking.

Most if not all crewed spacecraft have had fans to move air for one reason or another.

However most spacecraft are un-crewed and some have substantial internal volume and lots of electronics. When my imagination runs wild I imagine a small server farm with racks full of electronics, blinking LEDs and the roar of cooling fans.

Of course liquid circulation can cool things, so an atmosphere and fans are probably not necessary.

Question: But have fans ever been used in un-crewed spacecraft?

note: By "un-crewed" I mean spacecraft that were not designed for humans.

Soviet planetary probes sometimes had pressurized compartments, so I suspected that they might contain fans.

This answer confirms that Venera-8 had a fan. The illustration in the answer has the inner parts mislabeled, though. The fan is really #15 in the drawing.

Reading through the source linked in that answer also confirms that Venera-5 had a similar setup, with fan. Since the other answer didn't show its diagram, I will. (source) 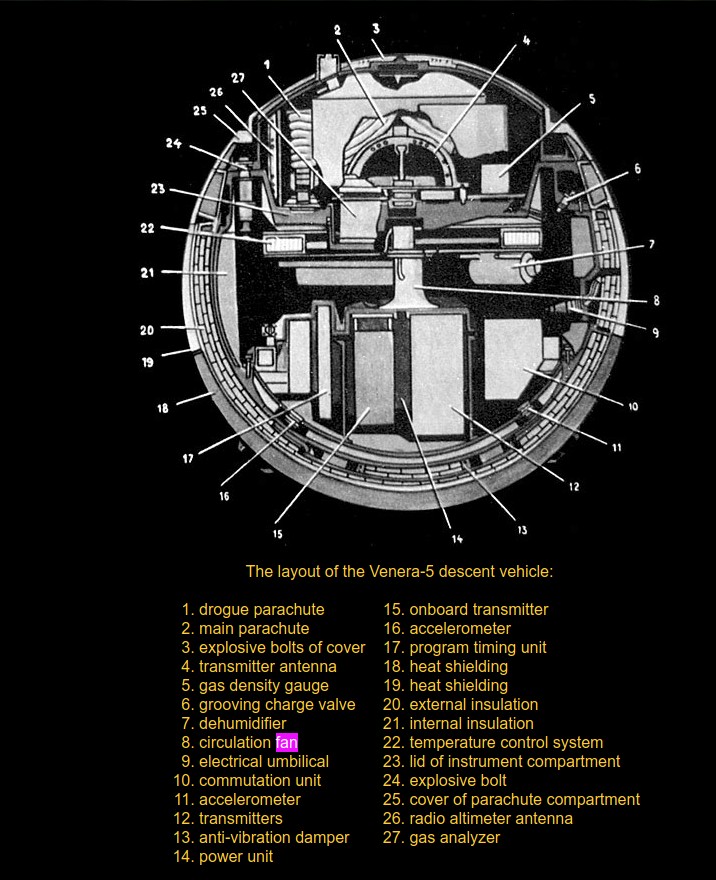 Also, according to Soviet Robots in the Solar System by Huntress and Marov, the early Soviet lunar impactor spacecraft Ye-1 (aka Luna) had a pressurized compartment with a fan.

The interior held 1.3 bar of nitrogen that was circulated by a fan between the cold outer shell and the warm electronics for thermal control...

So, yes, those are three examples. I suspect all Soviet craft with pressurized compartments had circulation fans.

Sputnik-1 was filled with dry nitrogen pressurized to about 1.3 bar and had a fan to control gas temperature between 20° and 30° C.

See Wikipedia in german or english.

A picture of Sputnik-1 design with the cooling fan can be found here.

Korabl-Sputnik 1, an unmanned early prototype of the later manned Vostok spacecraft, had a biological cabin with a dummy of a man. It was intended to test the life support system, so it had an atmosphere and a fan. See [Wikipedia] (https://en.wikipedia.org/wiki/Korabl-Sputnik_1).

Early russian lunar probes were also filled with nitrogen and contained a fan, Lunik and Luna.

Space probes using photographic film developed in space needed an atmosphere inside to use a wet or semidry developing process. Not only russian probes but also the NASA Lunar Orbiters. Some information about film development here.

Not the answer you're looking for? Browse other questions tagged thermal uncrewed-spaceflight thermal-control cooling or ask your own question.

8
Could a fan be used to prevent overheating on a Venus bound space probe?
4
First use of an incandescent light in an un-crewed spacecraft?
23
What cooling improvements did the Venera missions make?
5
How to develop a photographic film in lunar orbit?
3
Are there any uncrewed spacecraft that maintain(ed) an atmosphere?
2
In what conditions are the electronics of New Horizons housed?

3
How close are Zeeman slowers to being useful for general cooling in space?
9
How are spacecraft engineered to prevent overheating?
1
Why are deeper folds better for absorption?
6
How will Robotic Refueling Mission-3's liquid methane tank remain full for six months without any boil off?
6
How are coatings like Vantablack and Aeroglaze Z306 used on spacecraft components? Exactly what functionalities do they provide?
8
Could a fan be used to prevent overheating on a Venus bound space probe?
47
Finned heatsinks in space
3
Are there any uncrewed spacecraft that maintain(ed) an atmosphere?
4
First use of an incandescent light in an un-crewed spacecraft?
4
Just how preferable are afternoons for flying Ingenuity? Why?