Were the J-2 engines of the third stage of Saturn V throttable? I know that the F-1 for first was not, but what about J-2? I could not find any information about it.

Any reference or info for this?

The J-2 was, to use a technical term "kind of throttleable".

The engine incorporated a Propellant Utilization (PU) valve that could change the mixture ratio and thrust during operations. 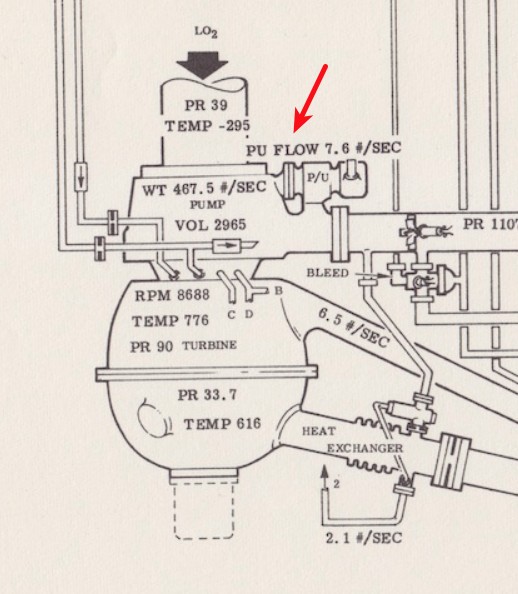 During engine operations propellant sensing devices in the vehicle propellant tanks control the valve gate position for adjusting the oxidizer flow to ensure simultaneous exhaustion of fuel and oxidizer.

The third stage also operates at the high-thrust level for the majority of the burning time in order to realize the high thrust benefits.

The exact time at which the engine will operate with the PU valve closed will vary with individual mission requirements and propellant tanking levels.

So not throttleable in the sense like the SSME where the vehicle sends throttle commands to it "arbitrarily" (which would change the thrust but not the mixture ratio), but the system was designed so that the engine and propellant system could modify its mixture ratio and thrust level operating point to achieve proper propellant depletion.

This chart shows the effect on thrust and Isp of moving the PU valve. 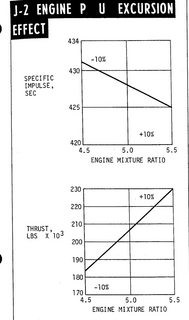 Operationally the second stage engines' PU valves were sometimes operated by signals from the booster's Instrument Unit rather than by the propellant sensing system. An example of this operational mode is described in the Apollo 12 Saturn postflight report paragraph 6.5. For details, please refer there, but it describes how the mixture ratio started at "Null", then was commanded to "High" at start +5.6 seconds, then to "Low" at start +324.2 seconds.

The third stage PU system remained in "null" for the duration of the first burn, was commanded to "Low" prior to restart, then to "High" 109.8 seconds into the burn. See paragraph 7.9 in the same document for details.

Not the answer you're looking for? Browse other questions tagged rockets apollo-program engines saturn-v apollo-11 or ask your own question.

23
Why is fuel ratio different for upper stage of a rocket?
7
Do mixture ratio always need to be constant throughout the flight?
4
Did the Saturn V have the status check "go at throttle up"?

21
How did they solve Saturn V pogo oscillation problems?
13
How would the Saturn V have differed if the first stage was also LH2/LOX?
10
What was the maximum thrust of the Rocketdyne F-1 engine?
5
Apollo 6, reason for premature engine shutdown of two engines of second stage of Saturn V?
14
Why was the Saturn V considered to be human-rated after Apollo 6?
15
Was all the fuel expended in each stage of a Saturn V launch?
6
Separation of the stages of Saturn V by pyrotechnics, what about electrical and mechanical connections?
5
Are there any markings that uniquely identify each Saturn-Apollo combination?