Did the Apollo LM's cockpit altitude displays account for the pointing angle of the radar altimeter?

The Apollo LM had a radar altimeter which was particularly critical in the final stages of landing. It could be set to two different pitch angles, either aimed backwards by 24º to be used during the earlier part of descent when the LM was pitched far back, or aimed directly downwards for the final approach.

As the LM pitched and rolled during its final descent maneuvers, the radar beam would unavoidably be swept around the lunar terrain. This would yield two sources of error: the height difference between the beam contact point and the terrain directly under the LM, and the off-angle "cosine factor" (the radar beam would be the hypotenuse of a right triangle with the altitude as the adjacent side, getting longer as the spacecraft attitude departed further from the vertical).

Obviously the varying terrain couldn't really be accounted for (or could it?†) but the LM guidance system would be aware of its pitch and roll attitude relative to the local vertical, so it could factor out the cosine for a better estimate of the correct altitude.

The LM generally wouldn't pitch or roll beyond 20º in the terminal phase of flight, so the cosine error would be no more than 13% (at 20º pitch and 20º roll) and usually much less, probably around 3.5% when the commander took manual control.

Were the altitude figures presented to the crew by the instruments in the LM corrected for the LM's attitude?

† The guidance computer did include a very crude, low resolution 2-D representation of a cross section of terrain at the expected landing site, which could conceivably be used for correcting altitude for terrain in the downrange direction, but would be useless at best in the crossrange direction.

Yes and No. The altitude data presented on the altitude indicator (tapemeter) depends on the mode select switch setting.

So with the switch in the LDG RADAR position the data comes directly from the landing radar, as Organic Marble described, which doesn't account for the attitude of the LM. In the AGS position the data would come from the backup computer in the LM, which doesn't even have an interface with the LR. So there the altitude is purely determined from the state vector, which is getting updated with accelerometer data.

But in the PGNS position, which was the nominal position for the switch during the descent (see e.g. Apollo 12 LM Timeline Book page 5), the data comes from the Apollo Guidance Computer, which does incorporate LR data into its state vector calculations. In that process the attitude of the LM and the position of the landing radar (position 1 or 2) is accounted for. The displayed altitude is then derived from the state vector. (Source: Guidance System Operations Plan for Luminary 1E, Guidance Equations figure 3.4.3.3 and page 5.3-72)

To answer your secondary question, starting with Apollo 14 (see Luminary Memo #147 ) the AGC had the ability to account for a simple terrain profile ahead of the landing site. In terms of altitude this means that the displayed number (in PGNS mode) would be altitude above the landing site and not the current altitude (with or without accounting for the pitch or roll angle).

The "LM altitude" computed from the Landing Radar slant range is only corrected for the altimeter beam angles, not the vehicle attitude angles. 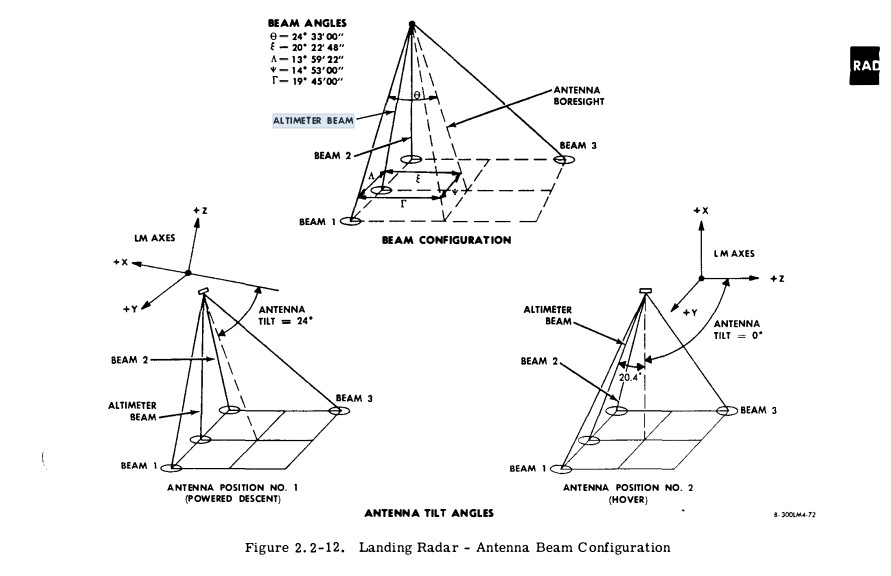 The altimeter beam angles are used by the LGC in the computation of LM altitude from LR slant range output.

On Figure 2.2-9 you can see the altitude going straight to the crew displays from the Electronics Assembly. There is no input into this processing for the vehicle attitude. It comes only from the radar. 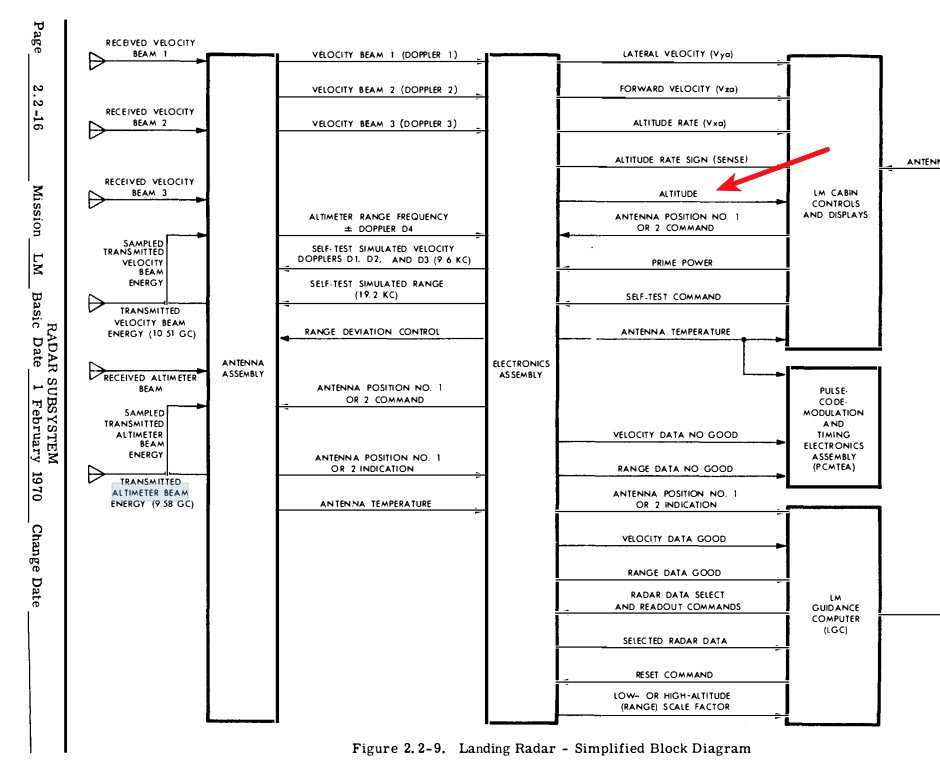 Not the answer you're looking for? Browse other questions tagged apollo-program lunar-landing guidance radar lunar-module or ask your own question.

4
Alternative to GPS navigation for vertical landing, especially on other planets

19
Did any of the Apollo lunar modules land significantly off level?
12
What did Apollo need the crewed Command Module for?
20
Could an Apollo LM land uncrewed?
5
Why were the canards on the Apollo LES retained even after being proven unnecessary?
16
Apollo altitude vs rate-of-descent schedule
12
Could the Apollo Lunar Module be flown to a landing without the LEM Guidance Computer?
1
How was a safe tilt angle ensured for liftoff of the Apollo LM?
6
How (the heck) was coherent synthetic aperture radar (SAR) implemented using photographic emulsion aboard Apollo 17?
3
Did the Apollo Command module really "skip" within, or off of the atmosphere as a part of its reentry program?
12
What distance did the Apollo CSM go before turning round to pick up the Lunar module?