How do OneWeb satellites' antennas work?

The images below are of actual OneWeb satellites or models. There are two disk-like appendages and an array of linear gizmos which may be an array antenna.

Is it possible to explain how these two types of structures work in some detail? Are the linear ones pointed at the ground? Do they steer electronically, and if so why is each row at a different fixed angle? Do the disks talk to adjacent satellites? Do they steer? 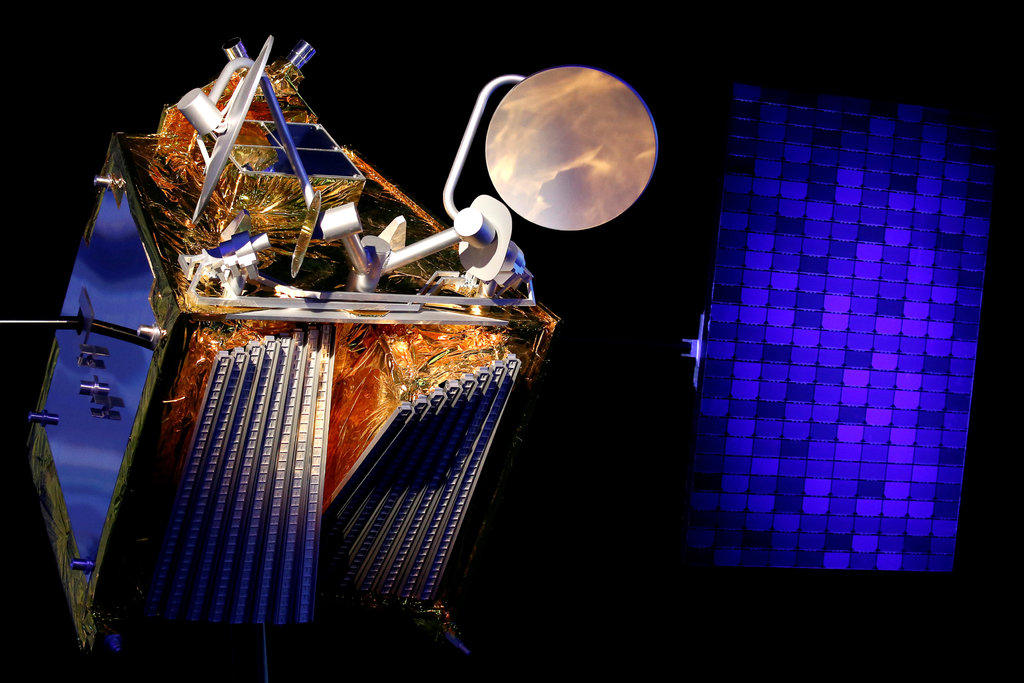 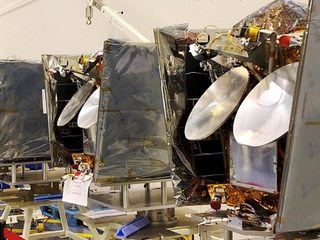 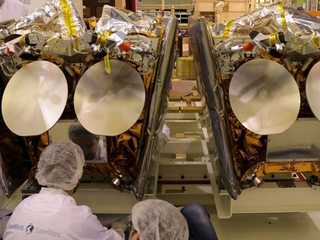 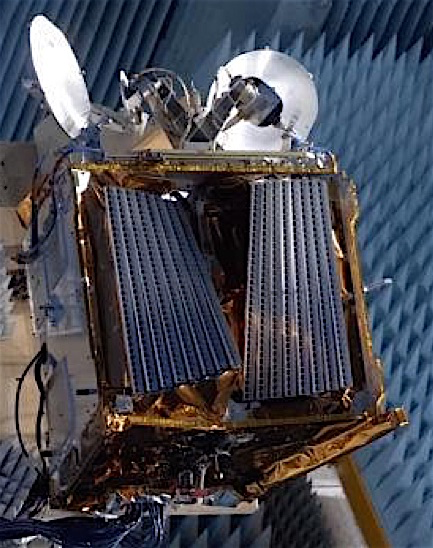 above: Cropped, rotated and sharped from www.ww01.net/en's Three ground stations will be built in China. What information does the “OneWeb” China Bank disclose?. below: From Caixin/com's U.K. Satellite Firm OneWeb Pushes Into China Market in Search of Scale 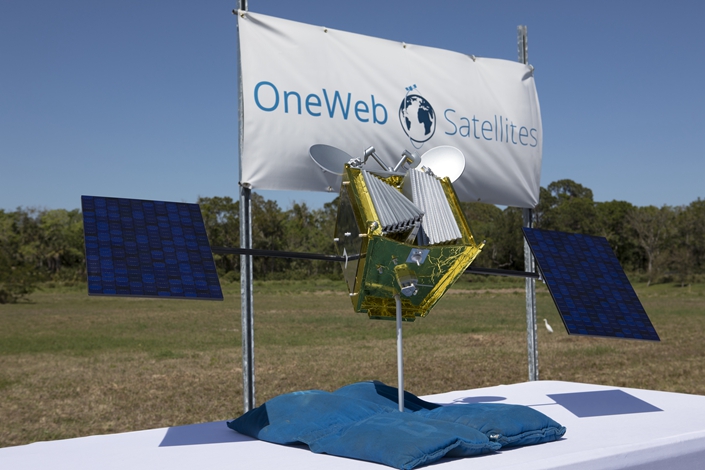 A complementary "rough" analysis to @prop-a-gator answer (taking as granted that a phased-array design was used):

We can see that the pattern consists of 16 elliptical beams. To facilitate discussions, number these beams from 1 to 16 in the direction North-South. 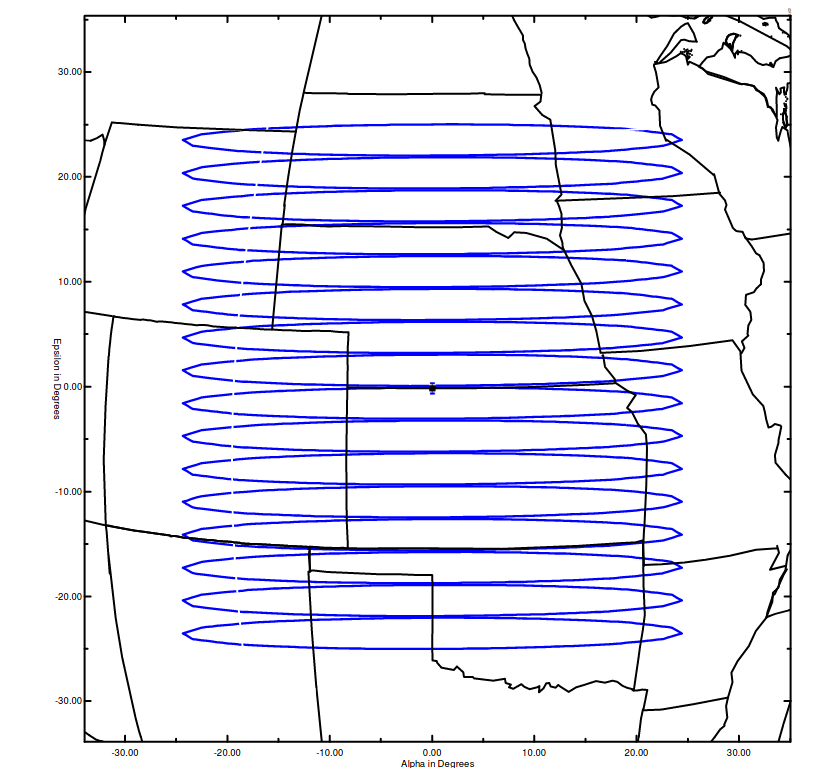 In the picture, we can recognize 16 "rods", so we can logically infer that each "rod" is to produce one of the 16 elliptical beams. The 16 "rods" need to be "tilted" appropriately from the nadir direction to produce the pattern of 16 adjacent beams. The 2 middle rods correspond to the two external beams (1 & 16), hence their large relatve angle. The two external rods correspond to the 2 adjacent beams, each side of the nadir (8 & 9). We can assume that this particular arrangement facilitates the spill-over between adjacent "rods".

1I do not have a direct link. But here is a way to download the document from the FCC site: Go to the OneWeb filing page of the FCC. On that page, find "Document View". Under it, you should have a link called "Attachment Menu". The "Technical Narrative" is in one of these attachments.

I might be mistaken, but when I went through OneWeb architecture proposals, they were ditching the idea of Inter-Satellite-Links (ISLs), while it would make their satellites more expensive, heavier and generally more complex. But this can be an outdated information.

According to my colleague who have way more experience in Telecommunication, those are indeed phased arrays and they would look down to Earth. The sole purpose of them placed at certain fixed angles is to reduce the impact of the gain loss due to the electronic steering. So consider it as a 'mechanical' pre-steering. For instance, some Satcom-on-the-move terminals are also utilize the mechanical pre-steering, because electronic steering is limited and will provide poor results for very steep angles.

EDIT: Addressing the Uhoh's comment: at the moment, I was able to find single source that mentions the combination of mechanical and electrical beam steering for the Satcom-on-the-move terminal. Link is here. See section 4.7.4.2 and figure 4.23 (B). However, there are plenty of mechanical vs electrical tilt discussions, which are rather related to the terrestrial comms. Example here. See the 'what is Tilt?' section. It is also mentioned there that combination of both mechanical and electrical tilting at the same time might help you to satisfy your goals for a smaller budget.

Not the answer you're looking for? Browse other questions tagged antenna oneweb or ask your own question.

6
How are phased array antennas used in spaceflight? Benefits and limitations
3
What were those motorized human-piloted platforms with helical antennas called (tracking launches)?
2
Why were the antennas on the spherical surface of some early satellites spiral-shaped?
18
Did NASA's Borg Collective-designed antennas work? Have similar designs ever been used in spacecraft beyond testing?
5
Regulations preventing SpaceX from saying "no" if OneWeb asked them to launch their satellites?
18
How do these cubesats' whip antennas work?
4
How were the 100+ antennas around Telstar 1 and 2 configured?
1
How did Luna 3's pivoting antennas and ribbon antennas work?