Why does Himawari-8 have problems with the Sun from 19th February to 19th April?

2020-02-05: Around midnight during the spring and fall eclipse periods, sunlight can directly enter the satellite sensor. To avoid this, the part of the observation area can be skipped. The period of influence is from 19th February to 19th April.

Question: Why around midnight and during this particular period?

Because then the sun will be on the exact opposite site of the earth, from the satellites point-of-view.

As a geostationary satellite, Himawari 8 is always above the same area, roughly over Indonesia & Papua New Guinea. 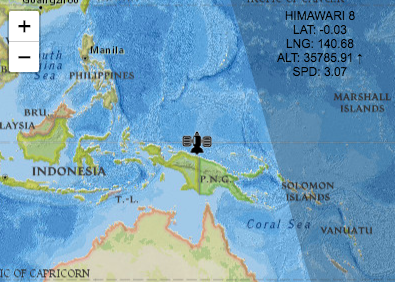 ...and during this particular period?

The sun won't be obstructed by the earth and sunlight can enter the sensor directly.

Presumably the same thing will happen during the opposite months of the year as well.

Not the answer you're looking for? Browse other questions tagged artificial-satellite geostationary earth-observation solar-eclipse or ask your own question.

7
Sending a satellite towards or away from the Sun
8
How does gravitational stability change with the distance from special places such as geostationary orbit and lagrange points?
8
How are solar panels protected from the Sun?
4
Why do all satellites seems to have the same color from earth?
4
Why does MODIS have two channels covering a band of 3929nm to 3989nm?
3
Why does the Earth's atmosphere as seen from space have the colors that it does?
2
Could any “Well-Tracked Analyst Object” turn out to be a natural object or even something else?
2
Why does the Deep Space Atomic Clock have such a short mission?
1
Why does OGO-1's trajectory and imminent reentry come from sky surveys and NEO tracking rather than normal satellite tracking?