What's the method behind this TDRS triplet inclination "madness"?

Previous "method to the maddness" questions: 1, 2.

The image below is from Why does TDRS 1's inclination evolve so much differently than that of all the others starting in 1995? and I've used it a few other places as well:

Today I just noticed that in the early 2000's there was an existing triplet of TDRS satellites whose inclination was around 6 degrees and increasing and a new triplet deployed also at about 6 degrees, but also such that their inclination is decreasing!

Once those three (TDRS 8, 9, and 10) bottomed out and turned around and reached about 6 degrees continuing to increase, a second triplet was deployed at 6 degrees with decreasing inclination! 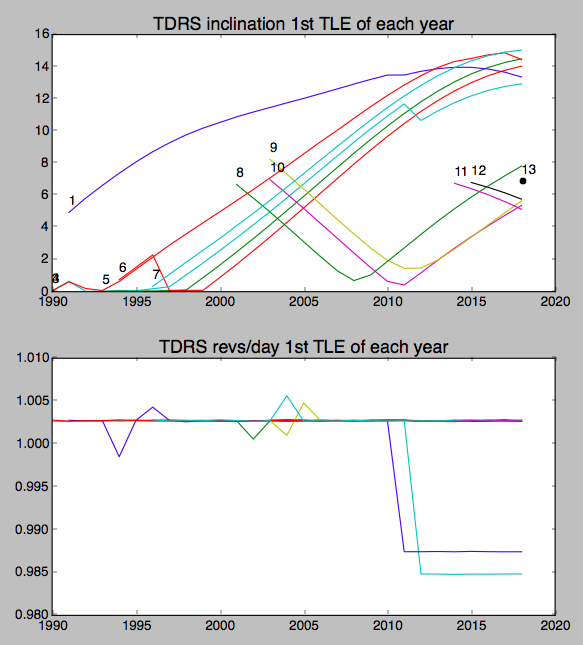 If a satellite in GEO is let drifting and its position is not continuously corrected, its inclination will start to change. The main cause of the perturbation is the influence of Moon and Sun.

Orbits with a positive RAAN tend to have an increasing inclination, while those with a negative RAAN have a decreasing inclination. For reference, refer to figure 2 on page 4 of this paper, which can't be included here for copyright reasons. This plot shows the change of RAAN/inclination, averaged over a year to remove short-term fluctuations caused e.g. by the Moon.

The TDRS satellites can be let drifting (opposed to telecommunication satellites), because each satellite of a triplet covers about one third of the globe. If they all drift in roughly the same manner, their coverage will stay the same, no matter what their actual positions are.

Not the answer you're looking for? Browse other questions tagged orbital-mechanics nasa geosynchronous tdrss or ask your own question.

23
Starman/Roadster in a=1.795 AU orbit, now what's the method to this madness?
25
SpaceX's 4,425 satellite constellation - what's the method to the madness?
9
Why do the geosynchronous TDRS satellites have this distribution of inclinations?
7
Interpolating precise ephemerides of GPS satellites
3
Why did the last six TDRS satellites start at ~7° inclination on a downward trend that appears to be "repelled" by zero & bounce back w/o crossing?
2
Why would a mission choose a geosynchronous orbit over a geostationary orbit?
3
Why does TDRS 1's inclination evolve so much differently than that of all the others starting in 1995?
2
How can I "debounce" these TDRS satellite inclinations? (reconstruct the zero-crossings)

10
At which point would two GSO/GEO satellites with similar orbital elements be closest to each other?
17
Why did the recent Sirius FM6 launch use such a high inclination?
25
SpaceX's 4,425 satellite constellation - what's the method to the madness?
9
Why do the geosynchronous TDRS satellites have this distribution of inclinations?
3
Why does TDRS 1's inclination evolve so much differently than that of all the others starting in 1995?
3
Why do orbits in the Iridium constellation have an inclination of 86.4°?
36
Did Sputnik 1 tell us more than "beep"? What science was improved by information gained from its orbiting the Earth?
2
What orbits are Starlink satellites now deployed into? How low to do they go on their first perigee?
3
Why did the last six TDRS satellites start at ~7° inclination on a downward trend that appears to be "repelled" by zero & bounce back w/o crossing?