What happens if an astronaut is hit by a tiny micrometeorite?

A micrometeorite (including space debris in LEO) hitting the metal wall of the ISS would likely cause a shower of secondary high speed fragments. But there are other "softer" materials proposed which would just let the object through without much interaction. For example by Bigalow Aerospace.

What would happen to a human who is hit by a micrometeorite directly? Take a 1 mm diameter metal object at 30 km/s impact speed as an example. Much smaller but much faster than a bullet from a gun. Would it just make a thin hole through the body, or would it like most military bullets tumble and tear up a much larger cavity in the tissue? Does it matter much how fast the projectile is spinning?

To my knowledge, micrometeorites have never caused any actual injury or even any important damage to equipment, although it is a much talked about potential threat.

The modules of the ISS are protected by Whipple shields: basically an extra wall outside the main pressure hull. A micrometeorite would puncture this shield and disintegrate, leaving nothing big enough to penetrate the main hull. In this image, the shield is on the right: 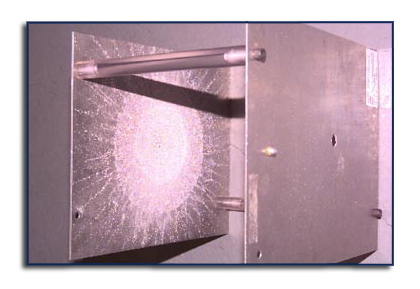 In a space suit, you don't have as much protection (it'd weigh too much, and be very bulky if it had a big air gap), but the outer layer of a spacesuit is designed to offer some protection from micrometeorites. As with a Whipple shield, the micrometeorite would disintegrate when it hits the outer layer. You'd be left with lots of tiny puncture wounds. The outer layer of a spacesuit (NASA calls this the Thermal Micrometeoroid Garment) is made of layers of (for the Space Shuttle suits) kevlar and dacron interspersed with thermal foil layers. The Apollo suits were slightly different.
Bigelow claims that their design offers better protection than NASA's aluminium Whipple shield.

A study on rats showed damage similar to a shotgun blast (PDF with graphic images), plus burns (and explosions if the spaceship used a pure-oxygen atmosphere).

Not the answer you're looking for? Browse other questions tagged debris impact or ask your own question.

21
Puncturing space suit during EVA. What would happen?
0
Humans surviving in space

10
What happens to waste on the ISS?
42
Why haven't more spacecraft/satellites been hit by debris?
6
What would happen if an object larger than Jupiter hit Jupiter?
12
Space Station Battle: Could the Almaz gun depressurize the ISS?
1
What happens to man-made objects in space after their service life ends?
7
What happens to a spacecraft crashing into the Moon?
6
What happens to the last stage of rockets?