I'm running a numerical simulation that calculates an interplanetary trajectory from Earth to Mars, and I'm trying to get a spacecraft into an orbit about Mars upon intercept, but am having a little trouble. I've been reading Orbital Mechanics for Engineering Students (by H. Curtis), which defines an "aiming radius" which will be able to help me with this orbit problem. The aiming radius is defined as $$ \Delta= r_p\sqrt{1+\frac{2\mu_2}{r_pv_\infty^{2} }}, $$ where $v_\infty$ is just the spacecraft's hyperbolic excess speed relative to Mars when it enters Mars' SOI, $r_p$ is the periapse radius of your chosen orbit about Mars, and $\mu_2$ is Mars' gravitational parameter (unfortunately not the Pokemon). As far as I can tell, $\Delta$ essentially defines the lateral offset distance between the spacecraft's velocity vector and Mars' velocity vector, set when the spacecraft enters Mars' SOI, so that the spacecraft will have a periapse radius (or closest approach radius) of $r_p$ when passing Mars. And from there you can apply the required $\Delta v$ to get into a Mars orbit once you reach the $r_p$ radius point. I'm horrible at explaining things, so this image from the above-mentioned book (p. 370) will hopefully clear things up: 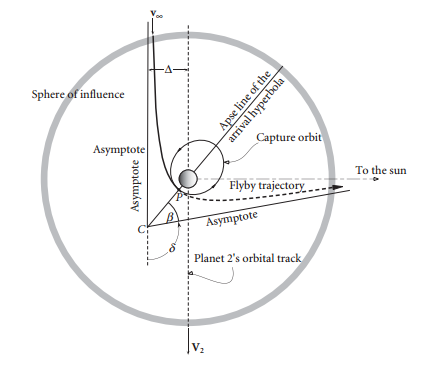 Now, this is all good and well, but in my case, with a chosen $r_p$ of $4.13418 \times 10^6$ meters, I get a lateral offset value for $\Delta = 8.26836 \times 10^6$ meters. If I was only concentrating on what happens in Mars' SOI (and disregarding the spacecraft's long and arduous heliocentric transfer orbit), I'd set the initial position of the spacecraft to be $-8.26836 \times 10^6$ along the x-axis and a little less than $5.77 \times 10^8$ meters along the y-axis, with Mars centred at $(0, 0)$ and then start the simulation to see what happens. But since I have to take the heliocentric part of the flight into consideration this makes things a bit trickier as I need to patch the heliocentric conditions to the mars-centric (is that the correct word?) conditions in order to get an accurate trajectory. So my question is this: How do I design the heliocentric transfer in such a way that when the spacecraft enters Mars SOI, it has the required $\Delta$ (or has a value close to it) for me to get the required value for $r_p$ when the spacecraft reaches its closest approach to Mars? My numerical sim already does a mid-course correction halfway through the heliocentric transfer (using a Lambert solver), so I was thinking I could do something there to get the required $\Delta$ at SOI entrance.

Any help would be great!

I see that angle between their velocity vectors is just over 5 degrees upon entry into Mars' SOI so this method would not work. Is there an analytical solution that exists for velocity vectors that are not parallel?

Law of cosines. I think of it as a more generalized version of the Pythagorean theorem:

So for example, if Mars is moving 24 km/s with respect to the Sun, your ship 27 km/s wrt the Sun, and the 27 km/s vector is 5 degrees from the 24 km/s vector, then the difference between the two is:

16
How accurate is the patched conic approximation when performing a Hohmann interplanetary transfer?
11
3-Body Simulation and Accuracy of Lambert Interplanetary Solver
10
Finding accurate periapse rendezvous radius using interplanetary Lambert solver
4
Calculating the periapsis radius of a flyby manoeuvre without knowledge of the eccentricity of hyperbolic trajectory
9
How can I calculate the delta-v correctly, this way does not seem to be correct?
4
Calculating a de-orbit burn, is this problem written correctly?
3
Why is the bend angle of a hyperbolic trajectory giving different results?
2
Is it (theoretically) correct to apply an equation that is derived from a hyperbolic trajectory, to an elliptic transfer orbit?
6
Which of the 2 delta-v calculations for a Mercury orbit insertion from LEO is right and which is wrong?