Answers to At what exact time was the Pale Blue Dot image taken? say that the famous image was taken by Voyager 1 on 14-Feb-1990 and it took until May of that year for all the data to be sent back to Earth since there was a whole series of images taken at the time because the camera would then be shut down permanently after the last image.

Answer(s) to What's next for New Horizons? suggest that it's camera is working fine and may be used for astrometry; measuring the apparent position of the nearby stars Proxima Centauri and Wolf 359 out at 40+ AU in order to quantify the parallax compared to images taken from Earth.

On 14-Feb-2020, 30 years after the original image, New Horizons will be about 47 AU from Earth, only about 20% farther than Voyager 1 was when it took the famous image. Does New Horizons have the ability to make a new "Pale Blue Dot"-like image some time this year, when Earth would be at maximum elongation?

If no, what is the limiting factor or difference in capability? 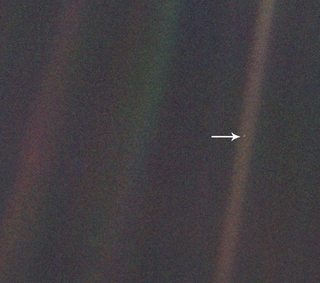 From the Johns Hopkins University page:

It is possible that another flyby target can be found and reached with New Horizons' remaining fuel supply. And after that? Another exciting possibility is that we can dramatically augment New Horizons' capabilities by uploading new observing and onboard data-reduction software once the spacecraft's flyby software is no longer needed. If NASA approves such a plan, New Horizons could survey the Kuiper Belt population in ways that no other mission or telescope on Earth or in Earth orbit can, and possibly even detect and hunt down its own next flyby target.

Future New Horizons extended missions, if funded by NASA, could explore even farther out. The spacecraft is on an escape trajectory from the Sun, traveling about three astronomical units per year. (An astronomical unit, or AU, is the average distance from Earth to the Sun, about 93 million miles or 149 million kilometers.) Moreover, New Horizons and its payload sensors are healthy and operating perfectly. The spacecraft has enough power and fuel to operate into the mid-2030s or longer, perhaps enough to reach the boundary of interstellar space.

From the BBC page:

Looking back at the centre of the Solar System - and directly at the Sun - poses some risk to the sensitive detectors in the probe's long-range camera, however. So, no imaging effort will occur until New Horizon's main mission objectives are achieved.

So as long as there is future mission funding and the hunt for more flyby targets goes on, no pale blue dot images will be taken in order to save fuel and not to risk the image sensors. Image sensors will be reserved to Kuiper Belt objects, maybe for up to 15 more years and up to 45 AUs. But the RTGs will decay too far to power the transmitters in the 2030s.

13
At what exact time was the Pale Blue Dot image taken?
6
How many spacecraft have taken a "Pale Blue Dot" type photo of the Earth from beyond cis-lunar space?
4
Where is the camera on the MarCo cubesat that took this "pale blue dot" type of photo of the Earth and the Moon?
8
What is the brown band in which we find the pale blue dot that is Earth?
4
Why does New Horizons have ~2 kg of unusable "trapped" hydrazine?
3
What's next for New Horizons?

35
Why is it hard to take a high quality image of far away objects (like Pluto) using a high-tech space telescope?
8
What is the brown band in which we find the pale blue dot that is Earth?
6
How many spacecraft have taken a "Pale Blue Dot" type photo of the Earth from beyond cis-lunar space?
13
At what exact time was the Pale Blue Dot image taken?
5
Is it possible to take another Pale Blue Dot image?
45
Have spacecraft photographed each other beyond Earth orbit?
11
Where in the Pale Blue Dot image should the Earth's moon be?
2
Was a "spare LORRI" camera available to take matching image on Earth the same time New Horizons took the parallax image from the Kuiper belt?
1
How well could the New Horizons spacecraft localize itself in space in 3D using parallax?
3
How (the heck) can thrusters alone stabilize New Horizons well enough to take high magnification 30 second long exposures in order to see +21 m objs?