Where in the Pale Blue Dot image should the Earth's moon be?

In the description of this image it is claimed that Moon should be detectable in famous "Pale Blue Dot" image.

Detailed analysis also suggests that Voyager detected the moon as well, but it is too faint to be seen without special processing.

And recently NASA released reprocessed version of it by Kevin M. Gill to bring out the details using latest image processing techniques. https://photojournal.jpl.nasa.gov/catalog/PIA23645

But there isn't any mention of Moon or where it should be in the image with respect to Earth so I was hoping someone can work out where Moon is supposed to be, perhaps image processing masters have coaxed it out unknowingly and we are just not paying attention!

A bit below and to the left:

Where was Voyager 1 when the photo was taken?

We can now simply take this position, put a virtual camera in an orrery there, and try to match the contextual image given in PIA00450 (also linked above).

I used my own orrery, which is based off of more JPL Horizons data. This orrery correctly takes into account the offset of the Earth from the Earth–Moon barycenter and the Sun from the solar system barycenter (although in both cases there is little difference at the time of interest).

I measured the location of Earth, Venus, and the center of the Sun on PIA00450, and then manually tried to adjust the virtual camera's field of view, direction, and rotation to get a match. I wasn't able to get all three points to line up perfectly (although I could get them very close). I attributed this to the necessarily high amount of error in trying to estimate the Sun's center from the huge washed out lens flare in the image. So, I fine-tuned the result using the positions of the Earth and Venus alone.

A better matching, or even the actual positioning data, may be possible to achieve. However, it would likely not change the result noticeably.

After writing this answer, I encountered JPL's online solar system simulator. Although it is not quite as flexible, I was able to quickly generate the result with approximately the right parameters: 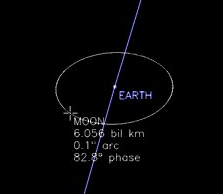 The camera parameters are not comparable, and the time is slightly different, but this clearly shows that my result is substantively correct. This simulator is a great tool to answer these sorts of questions!

5
Was a nuclear device detonated over Earth's Moon?
3
Where should a lunar polar ISRU mission land?
0
Would the orbit of the Moon affect Earth's climate?
8
What is the brown band in which we find the pale blue dot that is Earth?
6
How many spacecraft have taken a "Pale Blue Dot" type photo of the Earth from beyond cis-lunar space?
13
At what exact time was the Pale Blue Dot image taken?
3
Why does Blue Origin want to go to the moon?
19
Could New Horizons take a "Pale Blue Dot"-like image this year?
3
What rocket would Blue Origin go to Moon with?
21
What is the ninth planet on this image from the Voyager Golden Record?