Will Optical communications be possible between Columbus' Ka-band (COLKa) Terminal at the ISS and EDRS?

The new fridge-sized terminal will route video, voice and data to the ground through satellites that are actually higher in the sky than the ISS.

On occasions, these will continue to be the nodes in the American Tracking and Data Relay Satellite System (TDRSS), but the capacity is now there to go through a European alternative as well.

The European Data Relay System (EDRS) only has one satellite operating at the moment but will soon have a second.

This will afford the possibility of tens of minutes of dedicated, high-bandwidth connectivity for the Columbus lab on every 90-minute orbit of the Earth made by the station.

Astronauts are expected to use COLKa to video-call scientists who have experiments running on the ISS, and to make "welfare" connections with family and friends on Earth.

If I understand correctly, COLKa means the Ka-band communications channel for Columbus lab.

Avanti calls the payload Hylas-3 and will be using it to deliver broadband and other data services to markets in Europe, the Middle East and Africa.

Question: So certainly some of the communications from the European antenna on the ISS's Columbus to EDRS will be via Ka-band, but I'd like to know if at least the hardware is now there for optical communication between the two as well.

No, the COLKa (Columbus Ka-band antenna) provides only Ka-band communications.

This paper, while focused on the thermal design, provides the best overview of the system I have found: Columbus Ka-band Terminal thermal control - a compact design for varying conditions 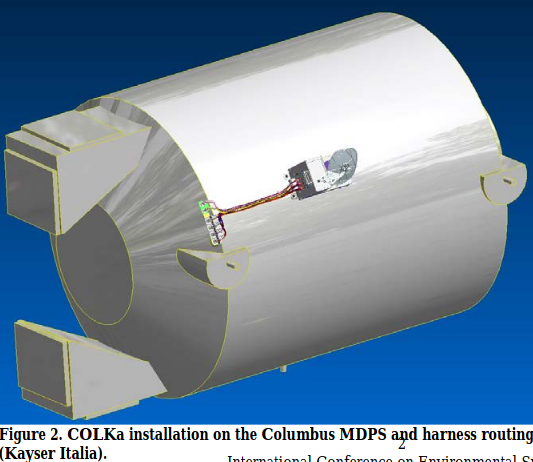 The eoPortal article is good as usual. It relies on the paper already cited as a primary source.

Not the answer you're looking for? Browse other questions tagged iss communication-satellite esa optical-communication or ask your own question.

2
How would you calculate the maximum bandwidth possible in space?