If an asteroid were detected, shooting towards earth with enough speed and certainty that it would all but guarantee a sequel of the end of the dinosaurs. Observatories and space agencies would almost certainly be first to know.

In such an event where the chance of collision with earth and ensuing mass extinction event is greater than 50%, is there a policy for whether or not these parties should inform the public about their inevitable demise?

First off, large life-ending asteroid impacts are very rare as there aren't many of them out there and we've found almost all of them: 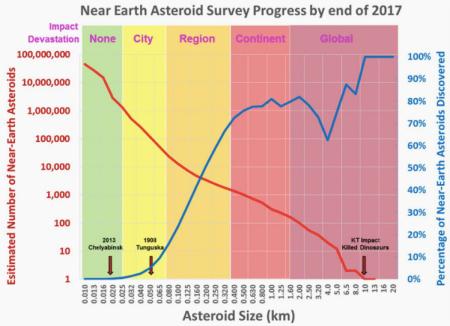 Looking at the 'continent' and 'global catastrophe' areas of shading on the right, the percentage discovered (blue line and numbers on the right hand vertical scale) is 80+%. This may not sound good, but if you look at the 'number of objects' (red line and numbers on the left vertical scale), you can see that is a actually only a handful of objects. (These objects are likely on odd, long period eccentric orbits which means they spend too much time being too faint to get picked up by the surveys but will eventually be discovered. If you look at the 1+km survey stats at the Center for NEO Studies (CNEOS), you can see we're find about 5 or so of these object per year now)

The bigger risk is from the 50-400 meter sized objects (the 'city' and 'region impact devastation' areas) simply because there are so many more of them (the estimated numbers are on a logarithmic scale) and we have found far fewer. The plan for finding and dealing with these objects (in the US at least) is set out in the 'National Near-Earth Object Preparedness Strategy and Action Plan' which was released by an interagency (NASA, FEMA and others) group in June 2018.

Internationally, this falls under the UN Office of Outer Space Affairs Committee on Peaceful Uses of Outer Space as outlined starting on page 7 of this NASA PDCO presentation that was given at the Jan 2018 Small Bodies Assessment Group meeting. The NASA PDCO is the Planetary Defense Coordination Office which was setup in 2016 following the NASA Office of Inspector General's report to better detect and track Potentially Hazardous Objects (PHOs), those objects larger than 30-50 meters that can come within 5 million miles of the Earth, issue warnings and study strategies and technology to mitigate PHO impacts, and coordinate US government planning for response to actual impact threat (from the PDCO overview).

Under this umbrella are SMPAG (discussed later) and the International Asteroid Warning Network (IAWN.net) which consists of space agencies and other observatories who do the tracking, modelling and would produce an official alert if the thresholds (page 8 of the presentation) were met:

Larger objects (greater than 20 meters, with more than 10% probability of impact in the next 20 years) will trigger Earth-based planning which for a potential US impact would be handled by Planetary Impact Emergency Response Working Group (PIERWG), a joint NASA/FEMA group. Even larger potentially impacting objects become the job of Space Missions Planning Advisory Group (SMPAG) (pronounced "samepage") who would look at mitigation options. SMPAG is working on 11 tasks, which are covered in this overview presentation, some of which including the 'Planetary Defense Action Plan', which covers what we would do to learn more about the object and options to deflect it, are available in their working draft form from the 'Documents and Presentations' section of the SMPAG website.

Edit: As I noted in a comment to this question, a tabletop exercise is run at each of the biennial Planetary Defense Conferences involving the conference participants; past conferences links are here. The PDC exercises are created by the Center for NEO Studies at JPL (most recent one here from 2019's PDC) are plausible but usually contrived in certain ones. The orbit is usually such that the planetary radars cannot observe it as they nail down the size, orbit and potential impact point very precisely, which removes the "making decisions based on uncertain knowledge" part of the exercise. Also as noted in the comments, an impact over a city (New York in the PDC19 example) is extremely unlikely given the percentage of Earth's surface covered by cities but it's a long-running "joke" of the PDC exercises that the hypothetical asteroid is always aiming towards the city where the conference is being held... NASA and FEMA run joint tabletop exercises roughly every year, reports of previous exercises are at the bottom of the PDCO Supporting Documents page.

Yes! Or more precisely, they're developing plans to detect and prevent it.

Planning and implementation of measures to deflect or disrupt an object on an impact course with Earth, or to mitigate the effects of an impact that cannot be prevented. Mitigation measures that can be taken on Earth to protect lives and property include evacuation of the impact area and movement of critical infrastructure.

They have a ton of relevant documents including National Near-Earth Object Preparedness Strategy and Action Plan. At 23 pages it's a quick read. It includes...

Goal 3: Develop Technologies for NEO Deflection and Disruption Missions: NASA will lead development of technologies for fast-response NEO reconnaissance missions and timely missions to deflect or disrupt hazardous NEOs. Developing these technologies before an imminent threat arises will strengthen our ability to prevent NEO impact disasters.

The International Academy of Astronautics, IAA, holds an annual Planetary Defense Conference. This features a Hypothetical Asteroid Impact Scenario in which NASA, FEMA, JPL, ESA, and other US and international partners role play an asteroid impact. Over the course of several days the agencies game their response.

The 2019 scenario began with an asteroid detection roughly 100-300 m wide with an estimated impact chance of 1% in 2027 and rising. Over the next few days the participants gamed out their response. This included information gathering, deflection attempts, political considerations (can we put a nuke on a rocket?), damage mitigation, and evacuation. Spoiler: it didn't go so well. They wound up shattering it. Manhattan did not survive.

While the 2019 scenario wasn't a mass-extinction event, the same techniques apply. If spotted far enough out NASA and related agencies would begin formulating a plan to redirect the asteroid and prepare for an impact.

Finally, Asteroid Impact and Deflection Assessment (AIDA) will test our ability to redirect an asteroid via kinetic impact by smashing a spacecraft into an asteroid. The smashing bit is NASA's Double Asteroid Redirection Test (DART) planned for 2022 to be followed by ESA's Hera to observe the effects. Insert joke about the US shooting things while Europe watches.

The other answers address non-doomsday situations. The worst case scenario I can think of is a large comet from the Oort cloud. Comet Hale-Bopp, for instance, was 40-80 km across. That's much larger than the dinosaur killer. Such a comet would show up with only a couple of years' advance warning, and would be massive enough that deflecting it by a large enough amount would probably not be possible.

Comets are mostly discovered by amateur astronomers. It would be observed by many people, and its trajectory would be impossible to keep secret.

It is worth pointing out that this scenario has a very low probability.

There most definitely is a protocol in place for the verification process and disclosure.

Not NASA or an asteroid, but there is a some discussion here for SETI and a "contact" for some context:

Be an interesting scenario if an new object from interstellar space was on a path that may intersect earth's orbit, or collide with something in the solar system, e.g. an object like Oumuamua.

Yes, NASA does have a policy. I am not an expert, but I can give you some information.

So, just in case; THE OBSERVATORIES WOULD SEND A MESSAGE TO A BULLETIN OF SCIENTISTS. THE SCIENTISTS THEN BY A MAJORITY WOULD DECIDE QUICKLY A DECISION. ON ARRIVING AT A DECISION, NASA SHALL MEASURE THE SCALE OF THREAT. THEN, IT MAY GO TOTAL - ARMAGEDDON AND NUKE THE ASTEROID WITH A SHUTTLE NUCLEAR BALLISTIC SHORT-HEAD IN THE PRESENCE OF A SPECTATOR SATELLITE(IF URGENT, THEY WON'T GIVE A DAMN ABOUT THE SATELLITE) OR, IT MAY USE A GRAVITY TRACTOR AND DEFLECT THE ASTEROID OFF COURSE. IT MAY ALSO SLAM IT IN WITH A HEAVY SHUTTLE.

On the Bright side, chances of getting extinct by an asteroid is rare.

For further information, you may as well watch Vox's video:

P.S: NASA WOULD BE TRYING A DOUBLE ASTEROID DEFLECTION MISSION D.A.R.T. on July 22,2021 on Didymoon, a non-threatening asteroid.

"God's in His heaven— All's right with the world!" ~ Robert Browning

Not the answer you're looking for? Browse other questions tagged nasa asteroid impact policy planetary-defense or ask your own question.

29
How do we know what percentage of NEOs we've discovered?
4
Has the National Near Earth Object Preparedness Strategy and Action Plan seen any action?

12
What risk management options are available for Mars orbiters and rovers to mitigate threat of impacting with Siding Spring cometary debris?
10
Does NASA have any documented procedures in the event of discovery of extraterrestrial life?
0
Does NASA have an Army and Air Force Exchange Service?
3
Has a NASA administrator ever explained US military initiatives in Space to the press before this?
13
Is there an end-of-life policy for Martian satellites?
7
How accurate is the following claim about NASA, from the movie Martian?
1
Does NASA yet have an official history of the Shuttle?
5
Did the "don't ask don't tell" policy affect American astronauts?
2
How Much Could You Deflect the Path of a 500 meter Diameter Asteroid with 100 STAR48 Rocket Motors