Would astronauts on the ISS be affected by the radiation from a global nuclear war?

I was wondering what would happen to the ISS astronauts if some global disaster wiped out all ground support. This question tells us that a 2-person crew might survive up to a year on stockpiled food and water supplies. I'm wondering whether, in the event of a global nuclear war (maybe NATO nations, Russia and China involved), whether the astronauts would even survive the war itself.

How much extra radiation would they encounter due to nuclear weapons? Enough to limit their lives to less than one year? Or negligble amounts?

tl;dr: It may depend a lot on their proximity to a blast at the time. For the lingering radioactivity afterward, that's all confined to the atmosphere and the ground and water; add to that the effects of nuclear winter, the pair on the ISS may live longer in space than most people on the Earth!

I don't think much prompt radiation (gamma rays) makes it through earth's atmosphere, which has an areal mass density equivalent to 76 centimeters of mercury.

There is still the EMP to worry about, though $1/r^2$ still applies.

As explained in the link above and here if a deliberate EMP device was used, the burst would be at high altitude in the atmosphere or in space. The prompt gamma ray pulse propagates to the thicker atmosphere where the electrons in the atoms of the atmosphere all jump at once, producing a lower frequency electromagnetic transient. That will propagate back up to the ISS' 400 km and if it's passing over the footprint of the EMP device it may get zapped†.

Once zapped, critical electronics may be fried, and while some systems may have backup circuit boards I don't know if they are stored in EMP-proof bags.

Without critical electronics they may not be able to point the solar panels, or even orient the ISS' attitude properly. With those lost, they would have a far lower average solar power. It's possible that they could conserve power enough to survive though.

Hopefully the ISS' metal construction will provide substantial electromagnetic shielding against the EMP. If it were a perfect faraday cage it would, but most makeshift faraday cages aren't perfect and there's all those important antennas and anti-charging gizmos on the outside.

†Of course in the unlikely event that the ISS is passing over the center of an EMP device detonation it could end up only kilometers away from the detonation itself! Then there's primary radiation to worry about as well as blindness for anyone looking out a window in the wrong direction at the time. 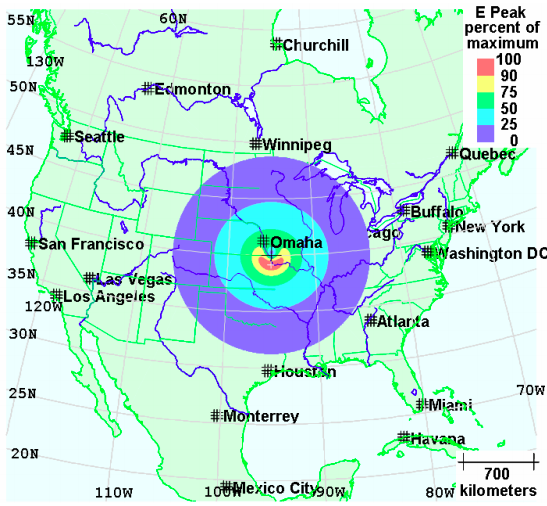 Figure 2-3. A sample E1 HEMP “smile” diagram. Such diagrams show contours of peak incident E levels, for a burst height of 75 km in this example. Here contour levels are shown as fractions of the biggest peak level (which is to the south of the burst point for this northern latitude burst). Over the exposed region, the average value is 10.4% of the maximum (12.4% if we use the square root of the average square of the peak instead). 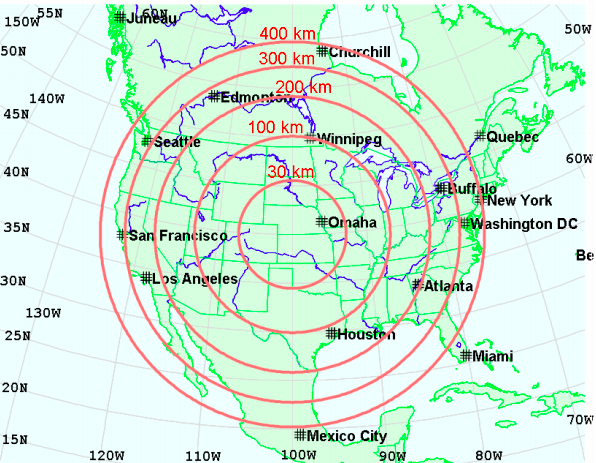 As a supplement to @uhoh's answer, I would suggest Collateral Damage to Satellites from an EMP Attack as a reference point. This does not discuss direct impacts on astronauts, but instead is focused on radiation effects on satellites, or, as put in the abstract "this paper examines the potential damage to satellites from high altitude nuclear detonations not specifically targeting space assets."

Further in the abstract:

We conclude that LEO satellites are at serious risk of exceeding total-dose limits for trapped radiation if generally accepted natural space hardening criteria are invoked. We believe, however, that the probability of an individual satellite being sufficiently close to a detonation to be threatened by prompt radiation effects is relatively low. GPS and GEO satellites are threatened only by the very high yield (~ 10 Mt) detonations

Here, prompt is immediate effects from the burst. Pumped belts are a result of charged particle injection (lots of beta decays in fission products!) into the Earth's magnetosphere, resulting in lots of charged particles flying around in space.

In the conclusions the authors note

• All satellites in LEO are at risk to serious damage from line-of-sight or enhanced radiation belt exposure resulting from EMP attacks over many geographical locations of the Earth.

Earth's atmosphere and the ephemerae of LEO satellites reduce the probability of line-of-sight irradiation to less than 20% for many threat scenarios, rendering the immediate loss of a few satellites a distinct possibility. The pumping of radiation belts constitutes a serious long-term hazard to all LEO satellites.

So, prompt to longer term (months) degradation of electronics, most notably the solar panels of the ISS, could well render the ISS uninhabitable well before running out of supplies.

Not the answer you're looking for? Browse other questions tagged iss crewed-spaceflight radiation or ask your own question.

2
How would blockchain be integrated into spaceflight? Have any methods been proposed yet?
20
How long can a 2 person crew survive on ISS totally cut from Earth?
4
How do large thermonuclear explosions on the ground affect satellites in LEO?