My question has to do with what sorts of raw materials are available at 129 Antigone. Reading the entry on Wikipedia I see that Antigone is an M class asteroid which is "composed of almost pure nickel-iron". However I note that the density is given as 2.96 g/cm3, which is well short of either iron (7.9 m/cm3) or nickel (8.9 m/cm3). Does this mean that Antigone is not solid (perhaps a rubble pile made up mostly of bits of metal) or that other materials such as stone or carbonaceous materials are present as well? The settlement is a largish habitat and home to some 500,000 people; would there be enough organics and volatiles present at Antigone for such a settlement or would it have to be imported from elsewhere?

I would appreciate any advice on this, or any pointers to where I could find out more detailed information.

tl;dr: There's a fair bit of wiggle room in density estimates, macroporosity is a thing to consider, you could still feasibly find a lot of material on this rock

I first want to clarify that asteroids are typed according to their spectral properties. In the case of 129 Antigone (at least according to the paper linked in the Wikipedia reference section), its albedo was used for its classification. This can only reveal surface composition; while there may be visible iron or nickel, it's not guaranteed to be so throughout. The asteroid's Wikipedia article doesn't have a reference for its claim that the asteroid is solid nickel-iron, but I was able to find a paper that analyzes radar data of 129 Antigone, and concludes that either the asteroid's composition is heterogeneous (metal and non-metal), or that it is entirely metal with a significant layer of regolith. Of course, the asteroid doesn't need to be solid metal to yield a lot of material1.

Additionally, the density numbers listed are only estimates. For asteroids, the only directly-measurable quantity in the density equation is diameter (and therefore volume). Thus the limiting factor for accurate density numbers is the accuracy of the mass estimate. There are several methods for mass estimation, all involving observation of gravitational effects. Two methods have been used for 129 Antigone: orbit deflection and ephemeris, both of which use the amount of deflection a body's gravity causes in other bodies' orbits. These methods can be horribly inaccurate, especially for smaller bodies, with uncertainties over 100% not uncommon. Below I've included a table and figure from the paper linked earlier, which contain the estimates that have been made for 129 Antigone's mass. 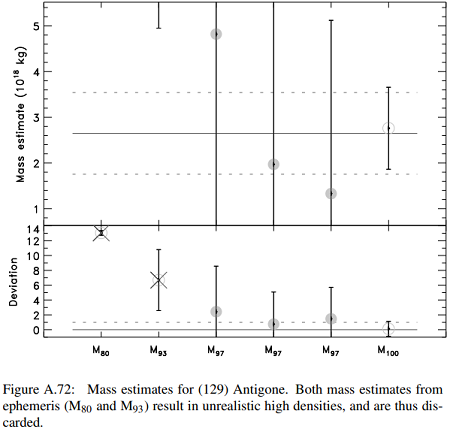 As you can see, the values are all over the place, with some being so divergent as to be discarded entirely (see the figure's label). Unfortunately, the two that were discarded also happened to be the only mass estimates that resulted in an average density of at least iron's. You could get close if you use the higher values of the remaining estimates' uncertainty ranges (most of which are bigger than the estimate values themselves), but that's probably not great from a statistical perspective.

The final density estimate you listed, 2.96 g/cm3, is a very probable number. This is especially the case when you consider the most accurate mass estimates (with uncertainties of a few percent) list that the most dense asteroid with similar macroporosity as 129 Antigone is 3.00 g/cm3.

Onto the topic of macroporosity, 129 Antigone is listed as having 29 ± 35 percent of its volume comprised of empty space...once again, not great accuracy. If it were to be compacted so that it had no macroporosity at all, the density would be around 4.18 g/cm3.

Assuming the asteroid is only comprised of miscellaneous carbonaceous material (with a ballpark estimated density of 2 g/cm3) and a 90-10 distribution of iron-nickel2 (with a density of 8 g/cm3), we can solve a simple set of equations as below:

Where x represents the percentage of miscellaneous carbonaceous material, and y the percentage of the iron-nickel distribution. Solving, we get x = 0.66 and y = 0.34. Thus, under these assumptions, we can estimate that the asteroid is 34% iron-nickel, which is about 9.01 x 10^17 kg, or about 300,000 times the estimated amount of iron mined on Earth in 2014. So even with the lower density of 129 Antigone, a pretty large amount of iron-nickel could be feasibly extracted.

This has been a lot of information, with a lot of assumptions and estimations along the way. Hopefully they have been enough to resolve any perceived discrepancy between 129 Antigone's listed density and those of iron and nickel. There should be enough wiggle room in the currently-accepted measurements of that asteroid to play with density and composition to suit your worldbuilding.

1Especially considering Earth's density is "only" about 5.51 g/cm3.

2Ratio loosely based on the United States' ratio of iron and nickel consumption in 2014.

Not the answer you're looking for? Browse other questions tagged asteroid mining asteroid-belt or ask your own question.

13
What are the actual legal prerequisites for extracting natural resources from asteroids by private entities?
59
What resources could be gained from asteroid mining that would be worth the effort?
9
Mining and the transportation of resources
3
Chemical resources on the moon in relation to human occupation
3
What's next for Planetary Resources?