Is it feasible to build a spaceborne electromagnetic lens (such as but not limited to a solenoid) of large area (perhaps as large as the ring at the supercollider at CERN) to gather and intensify solar wind or cosmic rays?

It is notable that solar wind particles follow the magnetic field lines spiraling out from the Sun and are approximately parallel in their paths.

ABSTRACT: A magnetic lens which will focus charged particles entering its aperture parallel to the axis can be constructed in the form of a toroidal winding. For an air or iron core toroid, the cross section of the winding is parabolic. If partial iron filling is used, trapezoidal or rectangular cross sections may be employed to produce sharp focusing.

I lost some steam on this; it was kindly asked at the beginning of a weekend but in its infinite wisdom the resident question closing cabal invoked exchangus interuptus.

Now I'm getting yelled at for "playing that darn stack changing video game again" on a weekday.

...(such as but not limited to a toroidal wound solenoid)...

I'll be writing about a normal linear solenoids, the same shape as those used at CERN and in the AMS. I'm not sure how to specifically address a "toroidal wound solenoid" like those used in Tokamaks because those are closed and only focus particles that are already trapped inside and already circulating. They can't focus or collect incoming particles in any useful way that I can think of.

Is it feasible to build a spaceborne electromagnetic lens... to gather and focus cosmic rays?

No. Take a magnifying glass outside and try to concentrate blue sky.

The way that the AMS-02 uses the field is to slightly alter the direction of the particles and measure that change with position sensitive detectors and ray-tracking calculations, the same thing that CERN does. There's not really any focusing or concentration involved in either case.

What's cool is that those don't matter. 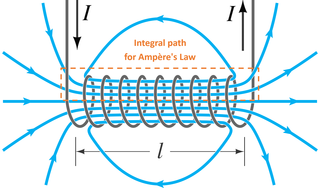 From here and here

Then that motion interacts with the axial or $\hat{z}$ component of the magnetic field producing a radial force in the $-\hat{r}$ direction.

No matter which direction you are going (like most focusing lenses) it focuses. But because it's a second order effect using the same magnetic field twice (in two orthogonal directions) and therefore depends on $q^2 B^2$ a solenoid will always focus both charge signs, unless it's so strong that there's a focal point within the lens itself and what comes out the other end is a diverging beam after the focus.

The orbits are a little weird inside but in some particle detectors they put thin position sensitive gas detectors inside and use those points along the trajectory to get some information on the particle. 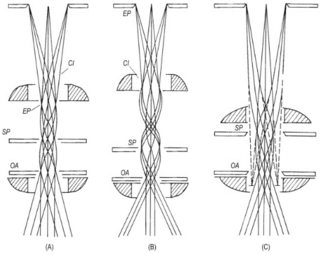 The image above hints that solenoids are often used in electron microscopes and other charged particle optical systems. There are also electrostatic lenses but those require extremely high voltages for high energy particles.

Ingo Hofmann's paper Performance of solenoids versus quadrupoles in focusing and energy selection of laser accelerated protons (also here, also see this) for example is useful because it also describes the other kind of magnetic lens, a pair of magnetic quadrupoles, and because it highlights the fact that magnetic (and electrostatic) lenses are purely chromatic. Unlike glass which gives weak chromatic aberration, the focal length of magnetic lenses depends strongly on the particles speed. Lenses are sometimes used to separate particles of different velocity using a pinhole!

The paper gives an equation for the approximate focal length of a thin solenoid. Because they work in a complicated way an exact formula is tough and most people star with this and then go straight to ray tracing.

What does the energy spectrum of cosmic rays look like? 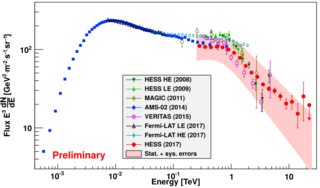 The peak is about 3 GeV (3E-03 TeV). Let's calculate the focal length for that using the actual 0.15 Tesla field from the permanent magnets of AMS-02 and for 7 Tesla, the top end of commercial MRI systems

If you make a really big giant superconducting solenoid, you can start to think about this, but...

5
Collecting antimatter from Van Allen radiation belts
3
Using interstellar medium as propellant for ion propulsion
3
How are Voyager's 16 thrusters oriented? Table that enumerates them and specifies directions quantitatively
2
Could a magnetic scoop work as a means to refuel a tank with hydrogen in orbit?