Have there been any rockets that run seven engines at the same time?

Answers to Rockets with n-engines, for n = 1, 2, 3… cover all single digit nontrivial† values except for seven, so...

Question: Have there been any rockets that run seven engines at the same time?

Thrusters on spacecraft already in space don't count. This should probably be a launch vehicle of some kind.

†zero would be the trivial single digit non-negative valule

Some configurations of the Delta II used nine solid boosters.

In launches from both the ER and WR, the first-stage RS-27A main engine and six of the nine strap-on solid-rocket motors are ignited on the ground at liftoff. Following burnout of these six SRMs, the remaining three are ignited.

Besides the Delta II and PSLV-G/PSLV-XL, there are a few proposed/in-development stages that would fire 7 engines at once.

ULA has put forth a paper design for a “Delta Super Heavy”, 6 boosters surrounding the central first stage core of the Delta IV. I don’t know if the idea was for it to be flown with all 7 engines firing together, or if it ever got beyond a vague concept stage. I note that the Delta IV is currently a horizontally integrated launcher, and that going to 4 or 6 boosters would raise difficulties with that strategy.

The Angara family has a proposed A7 configuration with 6 boosters around one core stage; this is likewise unlikely to ever be built.

The USSR's failed Moon rocket, the N1, had 30 engines on the first stage. This is significantly more than the limit of 7 you mentioned. 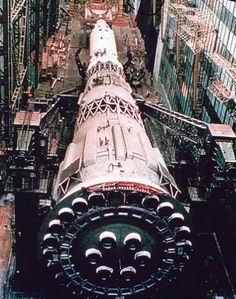 Not the answer you're looking for? Browse other questions tagged rockets booster or ask your own question.

16
Why are Europe’s Air & Space Academy and DLR urging ESA and CNES to reconsider the use of solid fuels for the proposed Ariane 6?
5
Are there any downsides to high TWR rockets?
16
How far have autophage rockets been developed?
8
Have there been any other cheap, modular launcher designs like the OTRAG?
4
Have there been any examples of re-usable rockets in the past?
1
Looking for figures for contemporary interstellar engine options
3
Can liquid rocket engines have the same thrust as solid rocket engines?
7
Are there any hand-sized rocket engines?
2
Calculating total burn time for a rocket under constant acceleration with two propellant consumption rates