What is a thrust puck on Starship?

Elon Musk recently mentioned a Thrust Puck on Twitter, "We’re stripping SN2 to bare minimum to test the thrust puck to dome weld under pressure, first with water, then at cryo."

He also mentioned this: "There’s a puck at the base that takes the engine thrust load. Don’t shuck the puck!"

What exactly is a Thrust Puck?

Starship is a 9 meter wide vehicle. The first stage (Super Heavy) will be mounting 35 or 38 or some other number in that range of sea level engines.

As you can imagine that will take at least three separate rings of engines. 6 in the center, then two more rings with the rest.

The Starship is the same diameter as Super Heavy, and the inner ring will be just three sea level engines, and an outer ring of 3 Vacuum optimized Raptors.

Thus the thrust puck is that center small disc with all the thrust running through it, on the early Starship builds.

Finally found a source, in this article Musk is interviews and says:

“Well, I just had a lot of talks with the team about that today,” he said of the SN1 failure. “It’s what you might call the thrust puck—there’s an inverted cone where we mount the three sea-level engines. In fact, it’s drawn on that whiteboard over there.” 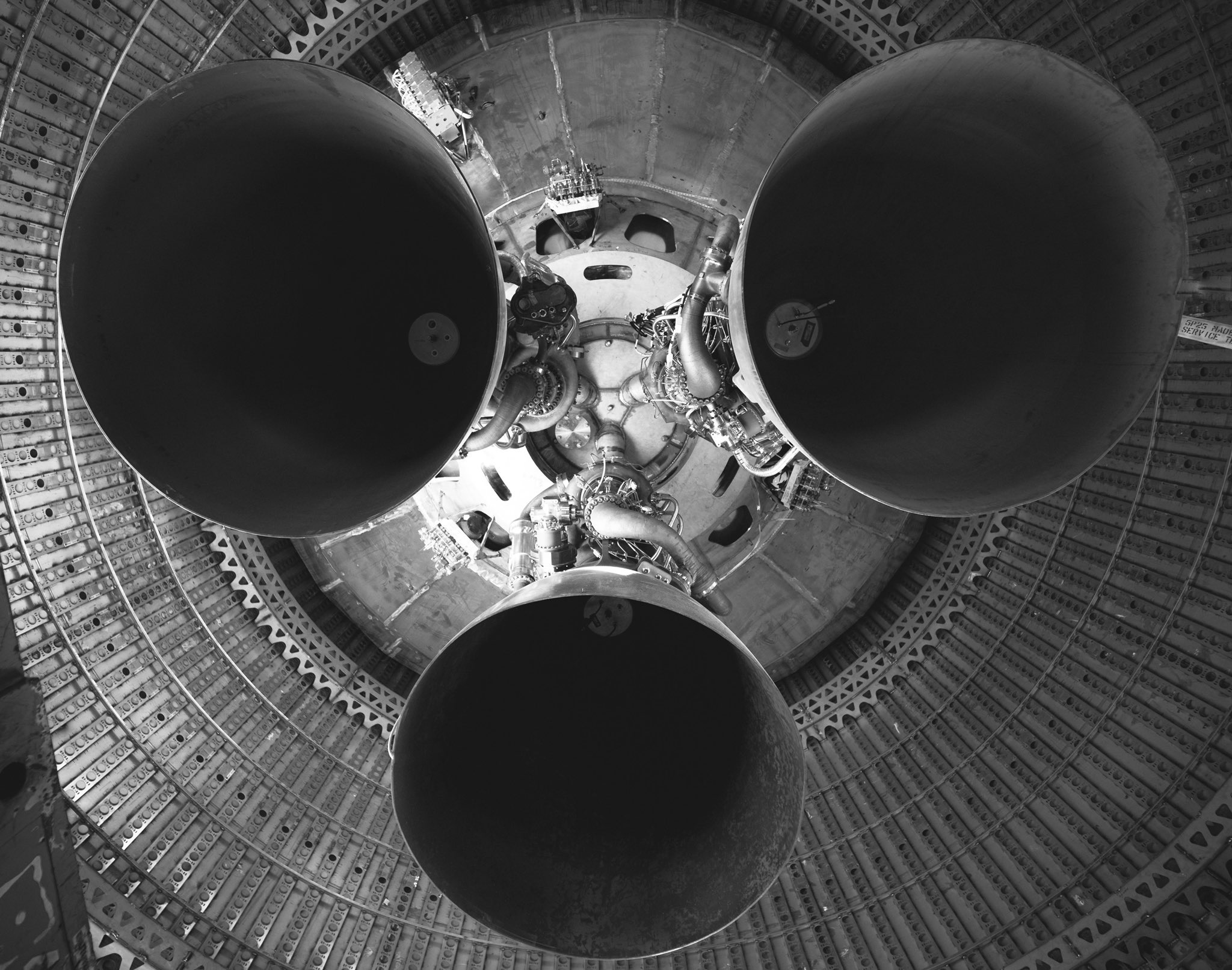 The above picture you can see the center where the engines are attached as the Thrust Puck on the MK1 build. 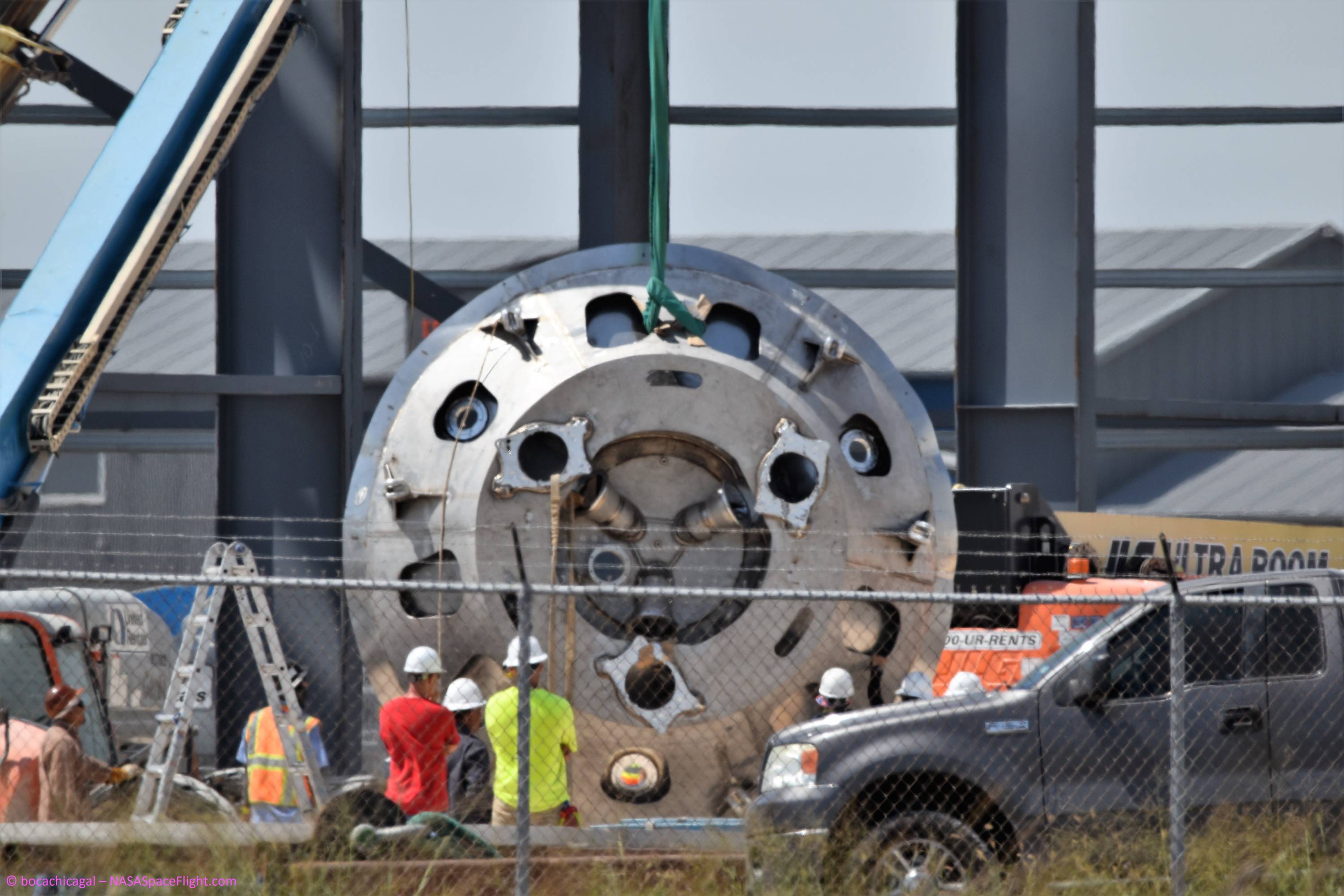 In this picture (from the Mk1, or Starhopper, not the SN1 under discussion) you can see the LOX and CH4 manifolds and the TVC attach points in the center. But the entire disc is NOT the full 9m diameter of the bottom dome, it is welded into the center. I propose this is the thrust puck.

During construction of the Mk1 (Starhopper) the thrust puck was captured being lowered in to be welded into the outer ring as shown below.

I am trying to find a picture of the dome with the missing center for the puck to be welded into but not having any luck. So the dome to sidewall welds were the initial problem. They think they solved that. Then this time it looks like it failed at that center puck in the middle of the bottom dome.

Here is a bad picture of the thrust structure with the dome sticking out and the space for this puck to be welded available and not yet welded in. This is the SN1 build. 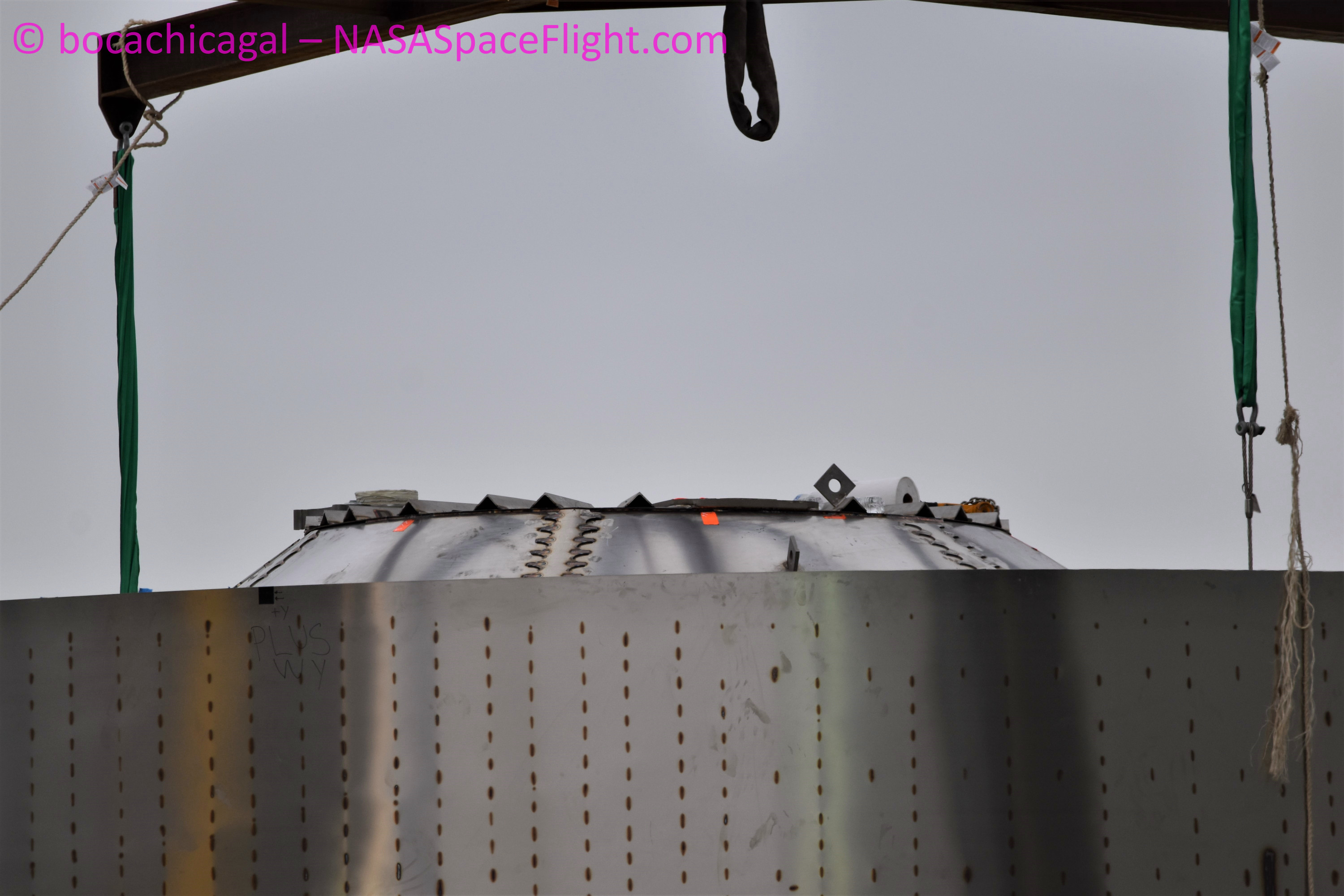 Here is a bad screen cap from a video of the structure being turned over and you can see the puck in the center, sort of, and this is from the SN1 build.

A fan has suggested that the layout of the bottom the vehicle, plumbing to engines, and thrust puck should look something like this image. 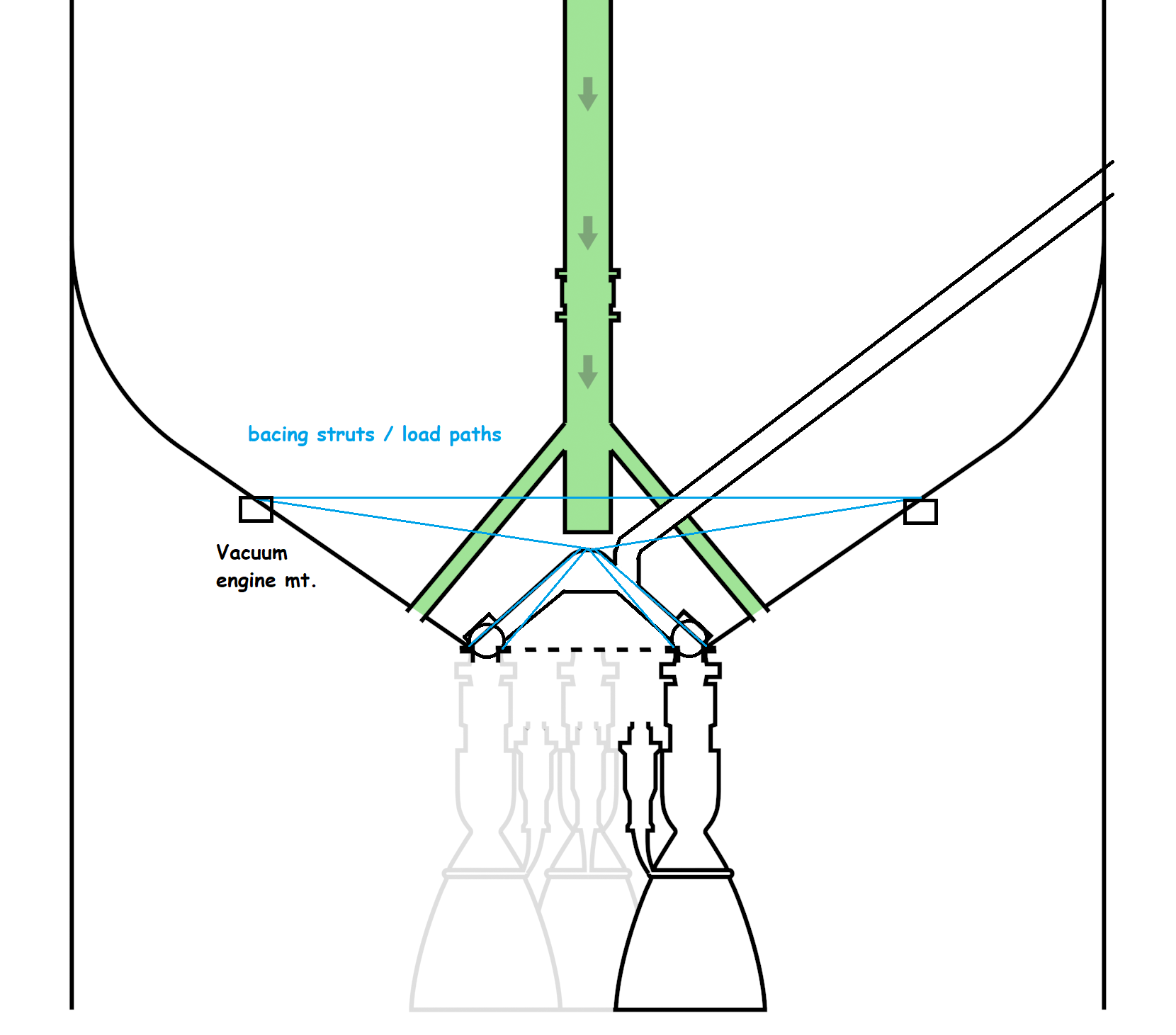 The inverted cone was found amongst the wreckage looking like this picture. 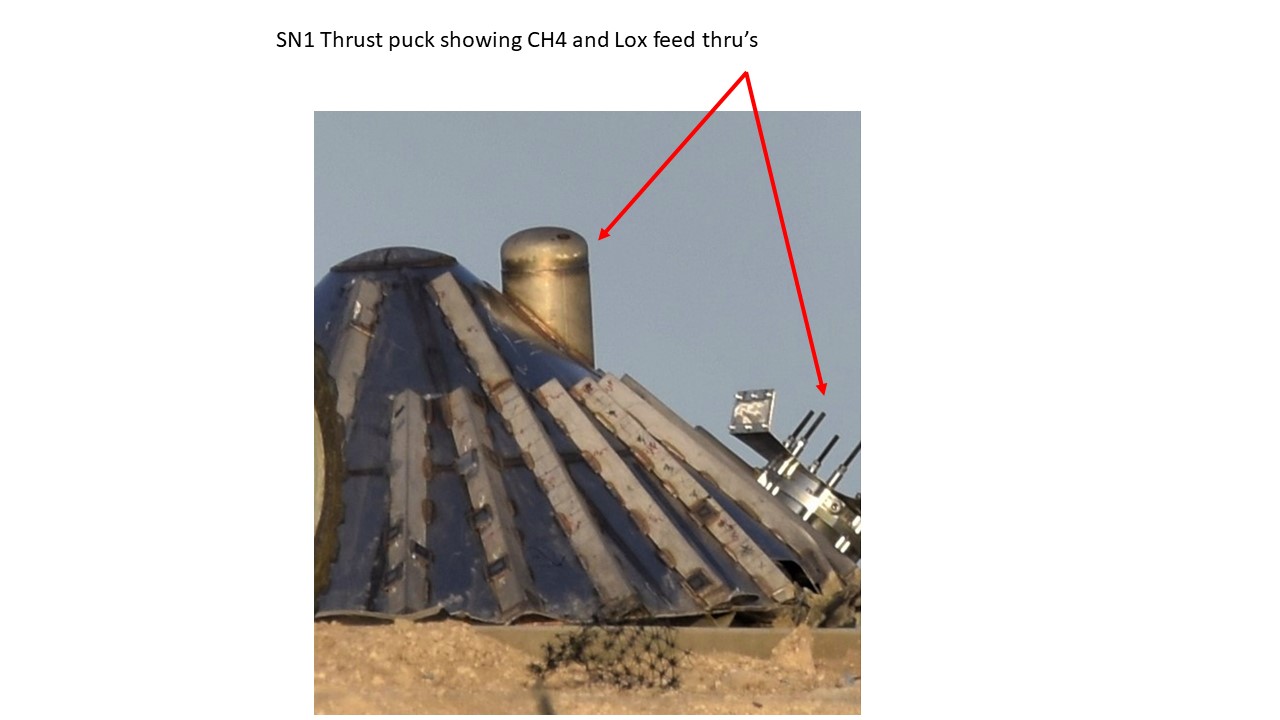 The structure on the right is the opening for one Raptor to feed CH4 from the bottom tank and the tube sticking up is the LOX feed connector.

Mar 6th they moved the SN2 lower tank to the launch/test pad for pressure tests. Nomadd got some great photos of the thrust puck. 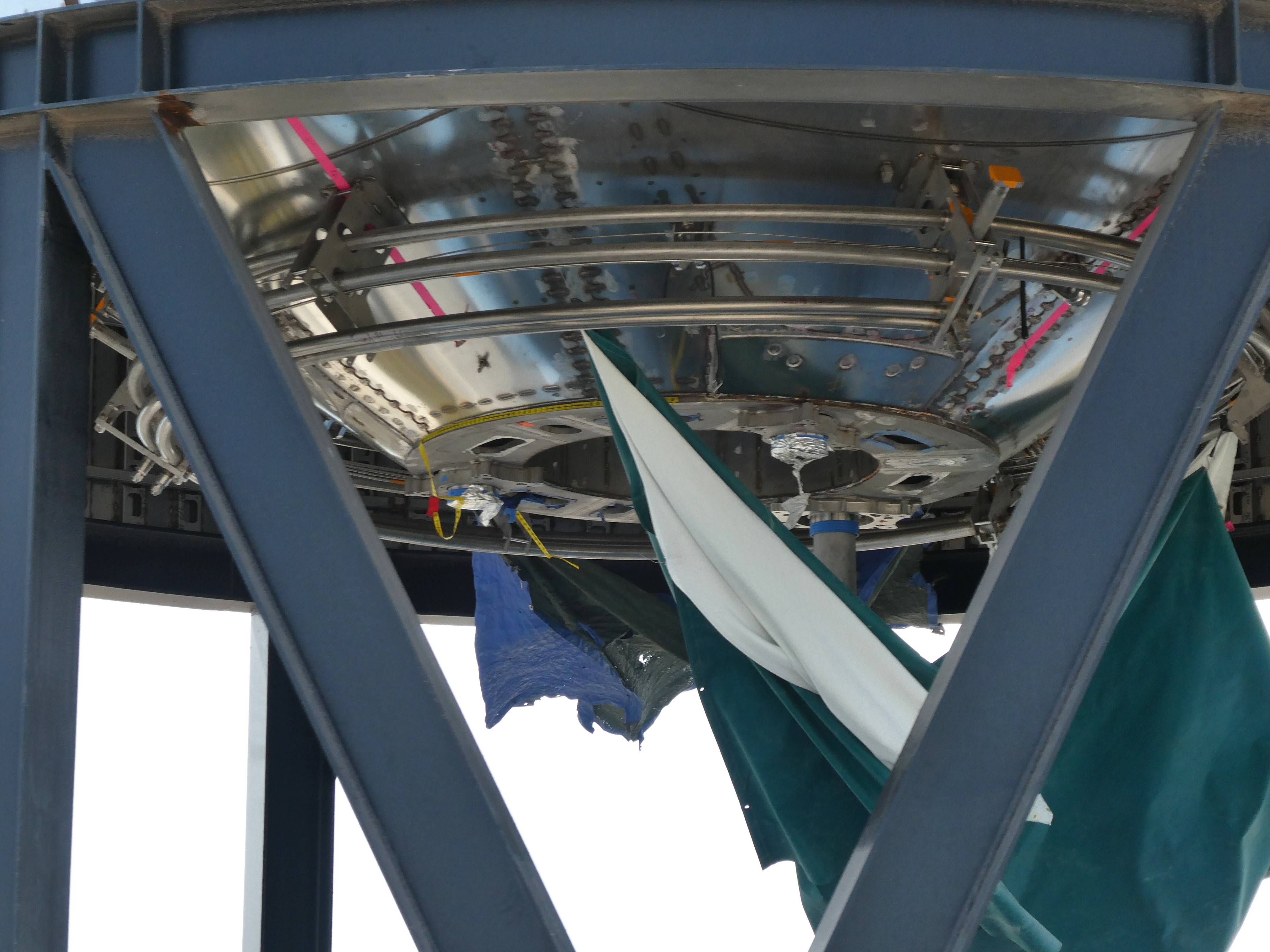 The SN2 vehicle was truncated to just the lower tank for pressure testing and SN3 started construction instead.

The SN3 vehicle under construction had to be flipped, (They build the bulkhead for the engines upside down, attach the rings around it, then flip it). This gives some EXCELLENT views by Maria of Boca Chica (See watermark in image) of the inside of the thrust puck. (That is, looking down the open top, at the top side of the mount point). 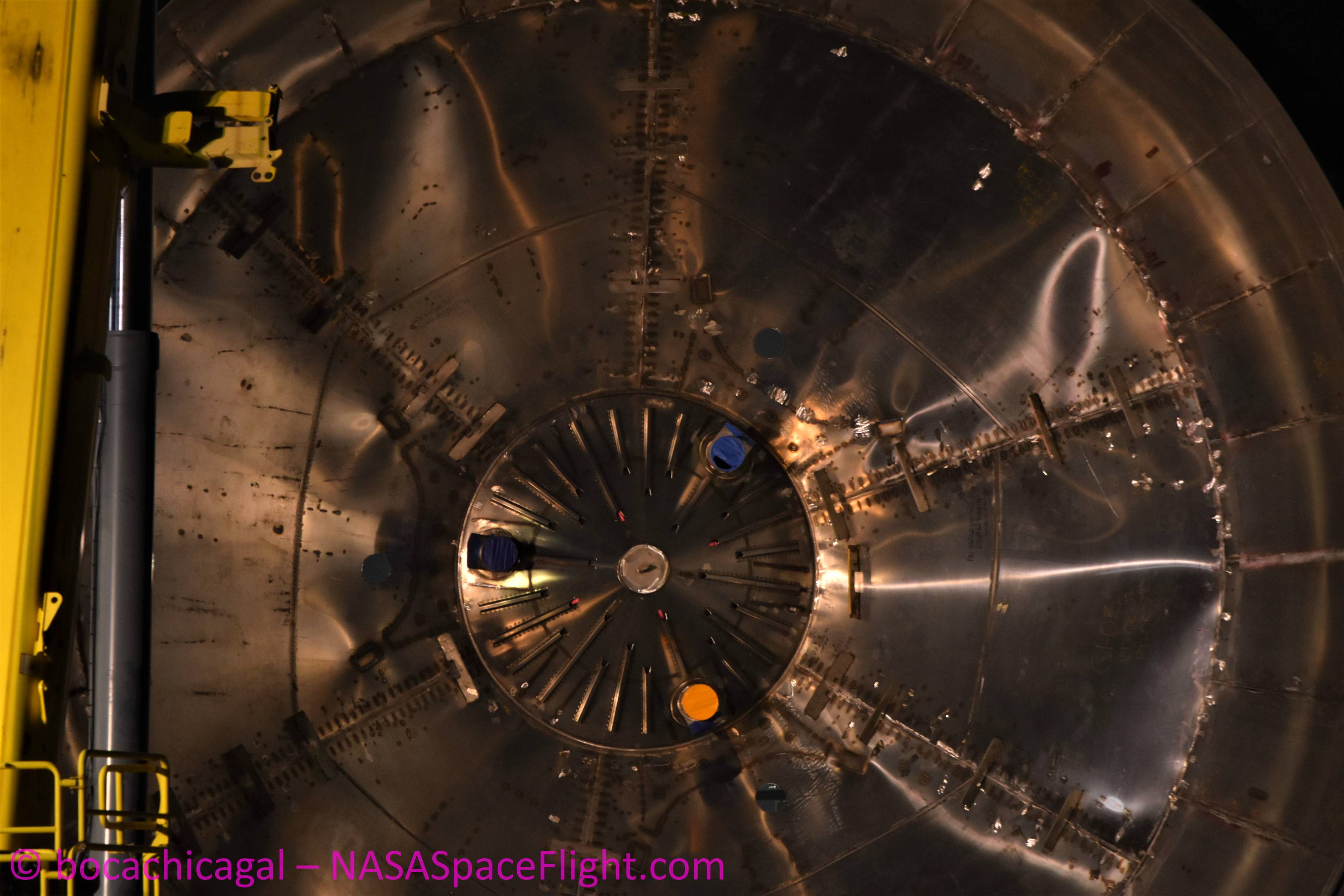 And then they flipped it and we have a great shot of the bottom view now as well. 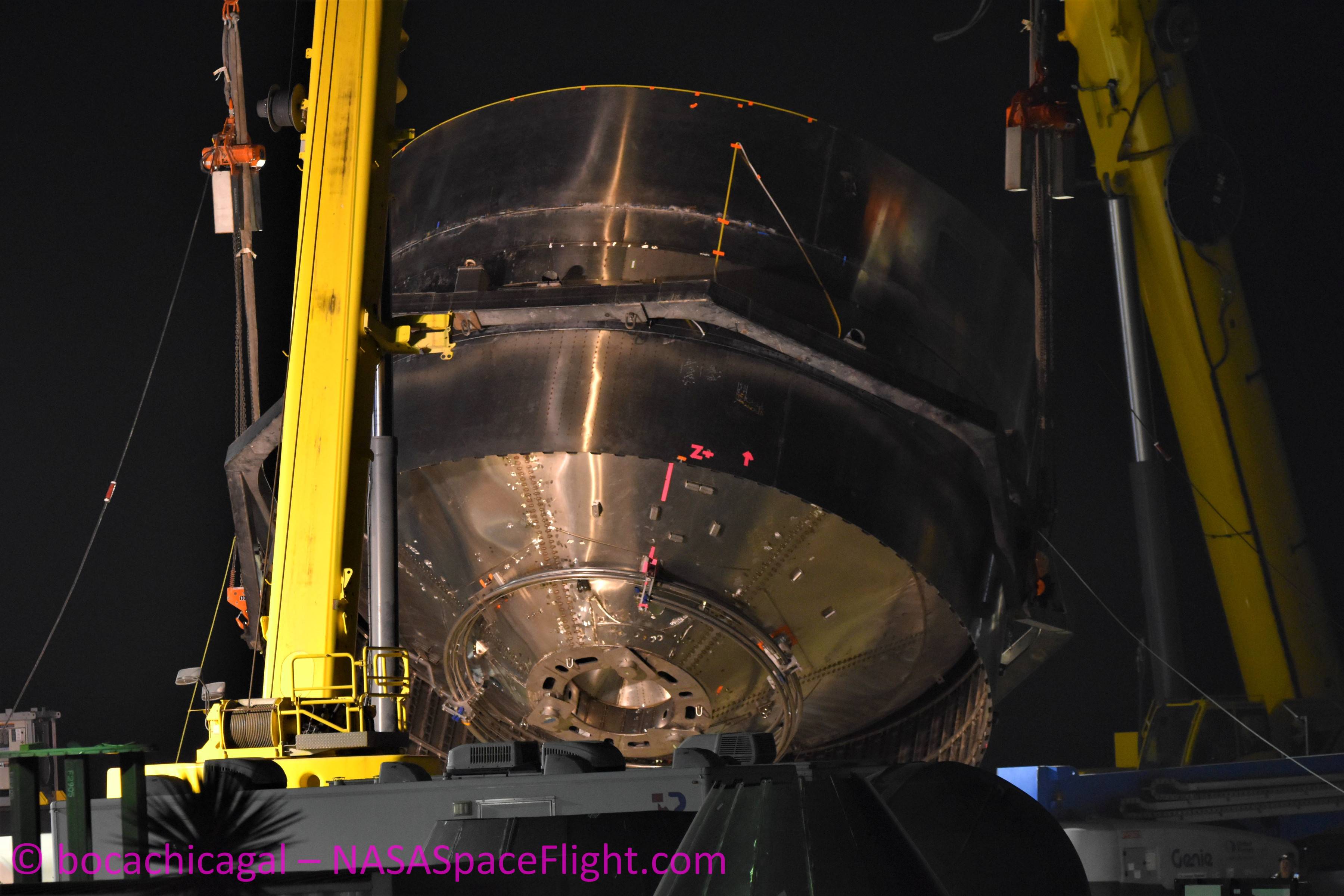 To those who want more specificity. Pictures are borrowed from post from geoffc.

Elon Musk: There’s a puck at the base that takes the engine thrust load.

In the photo below the three engines are mounted at the green circles. The thrust puck distributes the thrust from the engines to the larger structure. The entire structure circled in red is the "thrust puck". 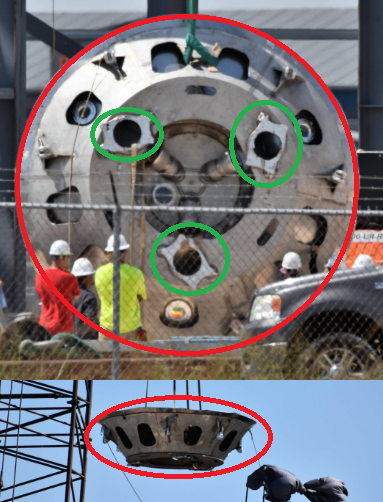 Not the answer you're looking for? Browse other questions tagged spacex rockets engines spacex-starship or ask your own question.

8
What would one learn by borescoping a rocket engine after an aborted launch?
7
What will the role of a pilot be on the SpaceX Starship?
3
What is the expected date for the first Starship 20km test flight?
16
What is the two little black side tanks seen at starship?
2
What is the Starship forward dome?
5
What will be the final Starship prototype?
3
Are the engines present on the SpaceX Starship Sea level engines or Vacuum engines?
2
Pressure inside Starship CH4 and LOX header tanks during entire Earth-Mars trip and landing on Mars?