Are black and white stripes any better than uniform gray for thermal control?

Q: What color is a spaceship?

A: Black and white and (infra)red all over.

Several answers and comments on Why were Europe's first few satellites so stylish? Why the pronounced alternating white and black stripes? contain phrases like "thermal control".

This is back before fancy materials could have both high thermal infrared emissivity and high visible light albedo at the same time. (see answers to Why are RTGs different colors?)

But I can't see why the alternating high/low and low/high ($\epsilon/a$)† stripes would be better than just slapping on a coat of gray paint. Did they simply not have gray "space paint" back then and so the stripes were a work-around? Or were there some thermal or other spaceflight or testing advantages that stripes had over a a solid gray?

† $\epsilon_{ir}/a_{vis}$ would be thermal infrared emissivity and visible light albedo pairs, not meant to be as a simple ratio though. For an equation using these search this site for "spherical cow temperature".

Shamelessly cropped from images in this question and answer(s): 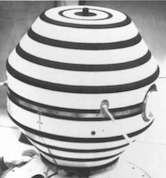 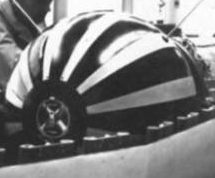 On other satellites, such as Explorer 3, reflecting oxide stripes maintain the average inside temperature between reasonable limits; 30 and 100 degrees Fahrenheit.

A better archived version of the video can be found here

Here's my view - I'd welcome further thoughts on anything I've got wrong.

I wouldn't be so bold as to state this is the criteria followed by early designers (60's/70's) though I encountered it so often in my earlier days (in the '90s) that it seems plausible.

There are black paints (these days) that are very stable in terms of lifetime alpha/epsilon. Early white paints, at least to the 90's, degraded in alpha under UV illumination from 20% up to, I think, 40% ish. However I don't know how well known that was in the 60's. I don't know about grey paints though I can't see the idea of a different shade being mixed for each mission being attractive.

Its not always paint! Sometimes it is film - terrestrial equivalent being sticky-backed-plastic. That aside I think similar pigment stability properties apply as for paints.

OK, this doesn't totally add up but it seems plausible that Black and White were chosen as they were available and believed to be well understood.

@Anton Hengst's comment about flexibility in test sounds plausible too. These days there is not much that is expected to be trimmed at the thermal vacuum test stage but it could well have been a more general expectation in the '60s.

Not the answer you're looking for? Browse other questions tagged history design thermal thermal-control or ask your own question.

27
Why are RTGs different colors?
12
Temperature of a satellite orbiting in low Earth orbit
5
Why were Europe's first few satellites so stylish? Why the pronounced alternating white and black stripes?
11
How have space suits dissipated the heat removed from astronauts?
3
Mercury reentry heat shields; material composition, manufacturing process and explanation of all those concentric ridges?

8
Might thermal mass, reflective insulation, and limiting light penetration allow heat control on the Moon? (reboot)
3
Which format would be useful for satellite engineers to accomplish better thermal analysis?
1
Why are deeper folds better for absorption?
2
Are 2 satellites joined better than 2 apart?
5
Why were Europe's first few satellites so stylish? Why the pronounced alternating white and black stripes?
3
Does any US rocket, historical or current, besides those using LH2 as fuel apply thermal insulation for propellant?
14
Is it feasible to paint SpaceX Starlink satellites black so as not to frequently saturate the CCDs of the Large Synoptic Survey Telescope?
6
Why would the Falcon 9 Block 5 carbon fiber thermal protection material need to be hydrophobic?
12
How brightly does Venus's hot surface glow at night? Could you see it? Could you see well enough to walk around?
14
Black/White patterns on SLS boosters, fairings - Are these still roll patterns