Where to find the full reflectance map of the Moon?

I'm looking for a reflectance map of the Moon to use in 3D visualization software. I've found NASA's CGI Moon Kit, which is described as

These color and elevation maps are designed for use in 3D rendering software.

This map is based on data from LROC. The Moon Kit also contains elevation data, which I can transform to e.g. a map of normals for bump mapping.

It looks like exactly what I need, if not one problem: this reflectance map only covers 70°S to 70°N. The polar regions are filled with useless (Photoshop-generated) texture. They explain it thus:

The source data covers the lunar globe from 70°N to 70°S. Because the Moon's axial and orbital tilts are both small, many areas outside these latitudes remain shrouded in shadow, even after thousands of passes by LRO's camera, so they are left out of the LROC mosaic.

OTOH, in another blog post, A Unique View Of The Moon, the data from that same LROC appear to be much more complete in terms of latitudes covered, but I've not found where to download this processed map (even if only for 643 nm, as said there). I've only found the large TIFF version of the view of the reflectance of the near side, mapped to a sphere (at the end of the post), and a rotation movie of this sphere, both of which are not too easy to convert to a final global texture.

Yet another NASA blog post, Synthetic Views of the Moon, appears to use the same LROC WAC reflectance map as the one mentioned above, but produces the look of the Moon in color, so apparently the reflectance map there is not for a single wavelength already. Still, it only shows the image produced, but doesn't give any links to actual reflectance map.

So I wonder, where can I download the full reflectance map to be able to reproduce these and create other images of the Moon? Is it available to the general public? Maybe I've missed some link in the posts I was reading?

The polar regions aren't filled with useless texture - it just isn't very accurate. I have done the exercise you are going through. I'm pretty sure that data package is the best that exists, and better data won't be coming along any time soon.

Here's what I did. I adjusted the top and bottom of the map to better match the rest. Yeah, that's just fudging. But there really is more data in that section than they properly show, it's visible and roughly accurate if you play with the colors there. 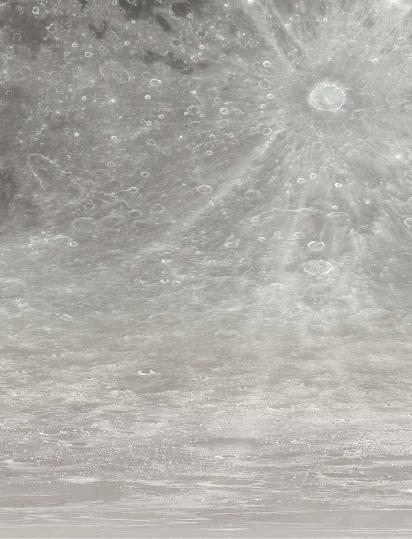 Once you have your moon model, other ways the polar regions aren't accurate become clear.

This could be improved on by creating actual geometry instead of using a displacement map shader effect, and smoothing artifacts with well adjusted modifiers. If you have access to a computer capable of that, I'm jealous.

If you are interested in getting the model I made, if only for comparison, it's available here: https://github.com/briligg/Moonwards-Assets/tree/master/Models/constructs/Planets/Moon

The USGS does have alternate versions of the maps. They incorporate data from Japan's Kaguya mission. They weren't working with enough data, or the tremendous brute power of NASA's vast staff, facilities, and budget, in order to produce a pure reflectance map. But they are interesting as a point of comparison: https://astrogeology.usgs.gov/maps/moon-kaguya-tc-global-mosaic.

The full set of images from the LROC are publicly available, unprocessed, from the WMS browser: http://wms.lroc.asu.edu/lroc. You can use the interactive map to identify individual images you want to look at, and then call them up, and download them. If you wanted to torture yourself, you could look at images of the poles for a while. They are largely black, but I gotta say, looking at them it just seems like they should be able to complete the map up to around 85 degrees by combining images from different times of day. I assume there is some problem with that idea. Maybe all this issue really lacks is somebody writing the software and throwing a supercomputer at this for a few days. Anyways, that database is an extremely powerful tool. 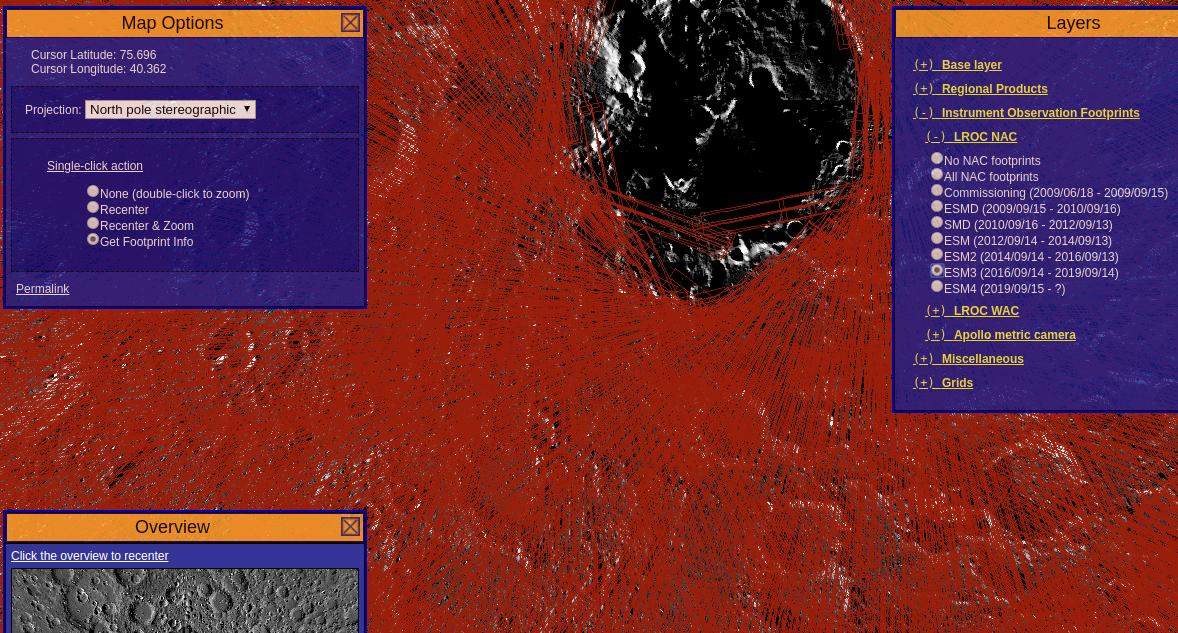 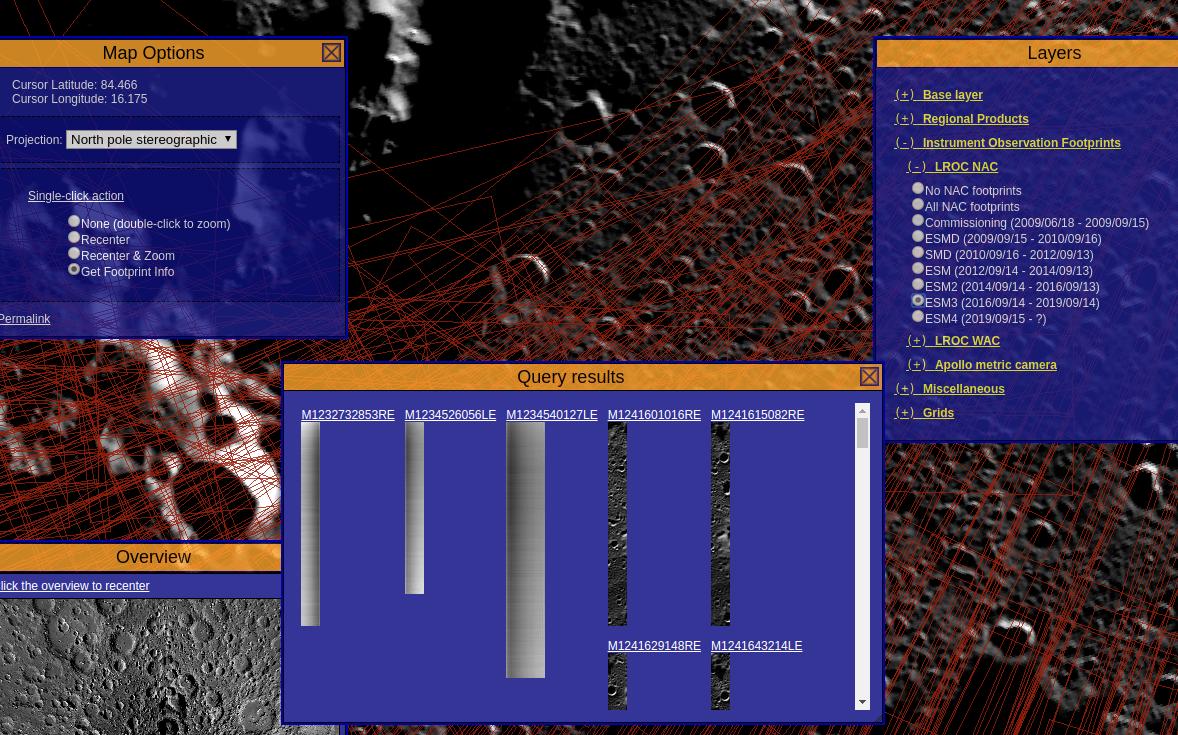 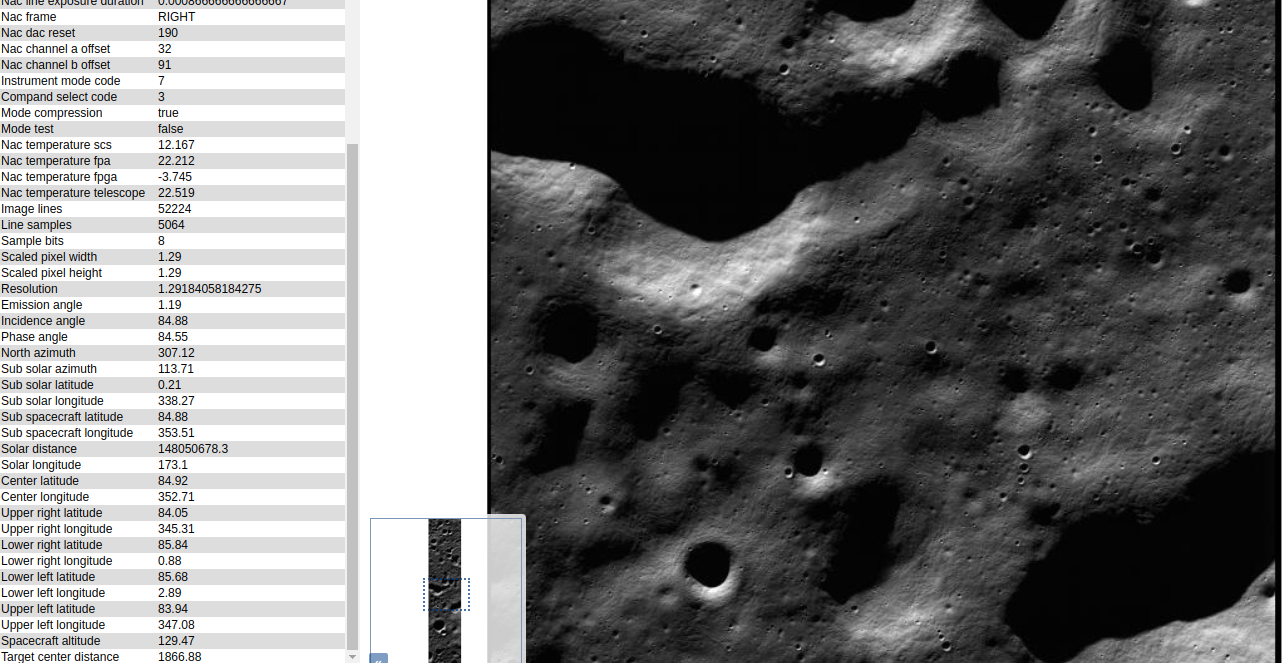 12
Is there a map or list of all the lava tube skylights the LRO has detected on the Moon?
4
Earliest gravitational map of a planet/moon?
8
Where/how do I view the Chang'e 2 lunar map?
2
Mapping the moon: how to use the Lunar Reconnaissance Orbiter (LRO) image data?
4
Where can I find "Space policy directive 1"?
3
Is ISS ever visible at all on the earth, unaided, by full moon moonlight alone?
3
How to create a map of a certain area of Mars?
1
Where can I find simple-ish math(s) about Moon launches from Earth and fuel consumption etc.?
2
Full lunar mineralization/ore map
9
Accurate map of Ceres