Could a horseshoe magnet help a satellite stay in orbit?

To illustrate how this propelling force would be created, please reference the drawing below: 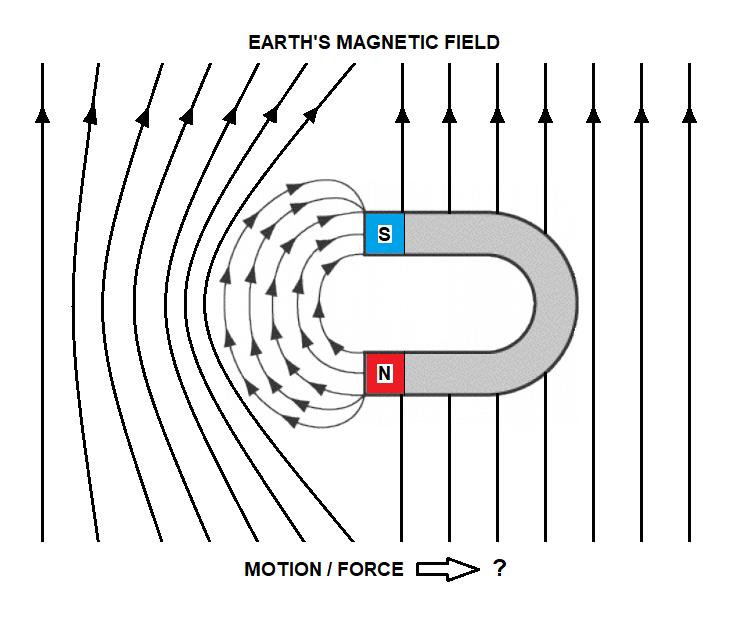 The horseshoe magnet shown in the drawing (and the satellite) is moving in a West-to-East orbit around the Earth. This propelling force is created via the magnetic repulsion of the two magnetic fields.

Also, this horseshoe magnet could be mounted to the end of a ten foot plastic rod with the other end of the rod attached to the satellite so the magnet's magnetic field would not interfere with the satellite's electronics.

I have thought about the issue of the magnet and satellite being rotated by the Earth's magnetic field instead of the magnet adding force/momentum in a West-to-East direction.

I believe a solution to this issue would be to place a magnet behind the satellite and another one in front of it, with each one being attached to the end of a long plastic rod so its magnetic field would not interfere with the satellite's electronics.

I have illustrated this concept in the new drawing below: 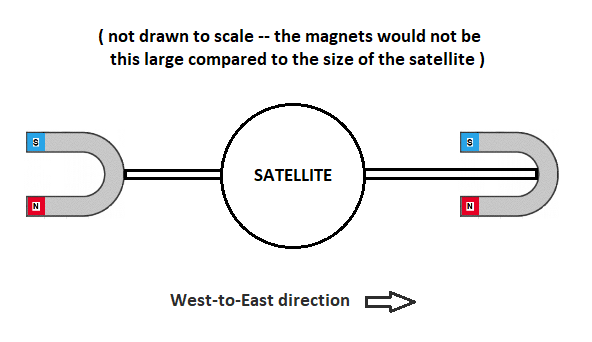 Would this be a viable solution to the rotation issue and would there be a propelling force which would add momentum to the satellite? These two magnets could be either permanent magnets or electromagnets.

The drawing depicts the right idea; if you hold two parallel magnetic dipoles close together there is a strong repulsive force. If you let go, they will fly apart.

In order to imagine what would happen if this was in Earth orbit, let's make the horseshoe magnet an electromagnet. It's the same shape but instead of being made from permanent magnet material plus iron, it's only iron and we wrap a solar powered coil around it so we can turn it on once in its circular orbit.

When that happens there will be a radial force pushing the spacecraft outwards. This doesn't change the velocity because it's perpendicular to it, so now the spacecraft is going too fast for this circular orbit, and it will start rising in altitude until apoapsis, and then will return back to it's original state. You've raised the circular orbit into a slightly elliptical orbit with the same periapsis.

If you ramped up the field slowly, you'd raise the altitude slightly.

It's a little bit like being in a heliocentric orbit and pointing a giant solar sail directly at the Sun. Not the same because the Sun's intensity falls off as $1/r^2$ and the repulsion between two dipoles falls off as $1/r^4$.

This repulsion has no further effect long term. Once you've slightly raised the orbit you have a new balance between attractive and repulsive forces.

This doesn't stop the drag force from slowly sapping the spacecraft's angular momentum, because drag acts in the direction of motion whereas our repulsion is perpendicular to it. The spacecraft will continue to lose altitude and eventually burn up in the atmosphere. Depending on the kind of magnet used, it might be so large and able to absorb heat that chunks survive reentry and fall on someone's house.

No. What can be done with a magnetic field in Earth's orbit is to torque, or rotate the satellite. But for propulsion of some kind, you would actually need to have some kind of a varying magnetic field, and a tether of some kind. This website talks a bit about how such a thing could work.

Now, from Lagrangian mechanics, note that:

And let's forget some dissipative effects and the angular terms for now.

And understanding that the energy terms do no depend upon the time-derivative of the generalized coordinate, we have:

No news there, the gradient of the gravity potential energy is just the gravitational force everyone here knows well about. The new term, which intuitively we think could provide some orbit control is the derivative of the magnetic field:

Now, this terms represent the instantaneous rate change of magnetic stored energy per unit of length in the position of the spacecraft. So, this disregards changes in attitude of the spacecraft (we know well the effects of magnetic torques on satellites, and dropped any attitude related coordinate before). Thus, we can assume that the magnetic induction field created by the satellite ($B$) is independent of the spacecraft position. So:

And the Earth's magnetic field on its orbit $H$ is not constant over space. Right? Well, I'd like to find a better reference to this value, but picking to this paper ate 324km (which is very low for an orbit) You get at most 0.16nT/km gradient vertical in a magnetic anomaly. Thus, converting to SI base units, we're talking about $1.6 \times 10^{-11}$ T/m. Dividing by the magnetic permeability of vacuum we get 0.042 A/m². So to get the same the average thrust used by GOCE (which I'm assuming around 2mN), we'd need 2mN = 0.042 A/m² * B, resulting in B ~ 47T. Sounds like much to you?

Well, incidentally I had the hunch but not a reference to tell you if this value was big or not. My google search however tells me that the record holder for world's strongest magnet as of 2019 produces "only" a magnetic flux of 45.5 T.

Remember when people tell you not to bring metal objects close to an MRI machine? Well according to this reference "Across the MR industry, most scanners are 1.5T or 3.0T, however there are varying strengths below 1.5T and more recently, up to 7.0T.". They generate force enough to mechanically break components on a spacecraft.

At one hand, my reference for magnetic gradient is not so great, but you can search data for other orbital altitudes and redo the calculations yourself. Maybe one needs less thrust for higher orbit, but then the base magnetic field and its variations are also smaller.

But wait, there's more! (Trust me, I'm an Engineer). Strong magnetic fields especially if varying over time create electromagnetic interference which may mess up every wire onboard the spacecraft. Also, see this question for extended discussion. I'd even wager that a field this strong could mechanically damage the satellite by breaking its structure, I haven't done the math here, but I'm convinced by this video.

So, in summary: In orbit, and over the size of a satellite, and over the variations of the Earth's magnetic fields, magnetic forces (and not only torques) do exist all the time, but they are really small, to the point were any usable effect would require an insane amount of energy to generate an absurdly strong magnetic field which would probably destroy the satellite.

11
Is it possible to reach the Sun without expending any fuel/reaction mass?
4
Could artificial magnets orbiting the sun be used to accelerate spacecraft, like a magnetic "gravity" assist?
2
Could a CubeSat be propelled by this low-tech electromagnetic propulsion system?
2
What are all the kinds of electric propulsion that don't qualify as ion propulsion in standard spaceflight lingo?
1
What are the forces affecting superconducting MRI-magnet on low-earth orbit and could you accelerate a satellite with these forces?

19
Passive attitude stabilization with magnets - are there studies based on actual flight data?
0
Could a spacecraft be propelled by the deflection of a very high number of charged particles?
1
Could a spacecraft be propelled by a 180 degree deflection of two charged particle beams?
3
Could protons in the Sun's solar wind be used to create a photonic laser thruster for a spacecraft?
3
Could you use magnets to orient in space?
2
Could a CubeSat be propelled by this low-tech electromagnetic propulsion system?
4
Could artificial magnets orbiting the sun be used to accelerate spacecraft, like a magnetic "gravity" assist?
1
What are the forces affecting superconducting MRI-magnet on low-earth orbit and could you accelerate a satellite with these forces?