How did NASA calculate 22 million "rocket horsepower" for the SLS Booster?

This answer to Does NASA really report the power of rockets in horsepower? cites NASA news item Space Launch System Booster Aimed and Ready to Fire which says

"What's impressive about this test is when ignited, the booster will be operating at about 3.6 million pounds of thrust, or 22 million horsepower," said Alex Priskos, manager of the SLS Boosters Office at Marshall. "This test firing is critical to enable validation of our design."

If I said my car was operating at 400 Nm or 200 kW you'd balk because of the "or" which suggests that these are two ways to say the same thing. You can use "and" because you'd be measuring two different pieces of information. They may be related but you cant' simply get one from the other.

And yet here is 3.6 million pounds of thrust, or 22 million horsepower.

update: @OrganicMarble has pointed to @MarkAdler's answer which explains a definition and provides a link to a calculator in Wolfram Alpha. When I enter 3.6 million pounds of thrust I get back 48 million hp, which is over a factor of two higher than the 22 million horsepower mentioned above.

Somebody is wrong, or there are multiple definitions, or maybe I didn't use the calculator properly...?

tl;dr: A complete answer is going to need more information and insight because available Isp values don't generate the quoted value for the SLS's SRB's "rocket horsepower". Currently it seems that somebody is wrong somewhere and I'd be happy if it can be shown to be me!

The question links to @MarkAdler's answer which explains that one could define the power of a rocket as the rate that kinetic energy is imparted to its exhaust in the frame of reference moving with the rocket†.

We know kinetic energy $E$ is $m v^2/2$ and that relative to the rocket the effective or average exhaust velocity is close to $I_{sp}$ in seconds times one standard gravity defined to be exactly 9.80665 m/s2. Thus in the frame of the rocket the power $P$ will be:

Since thrust $T$ is

†In this frame we can use $F = dp/dt = v dm/dt$ and don't need the $m dv/dt$ term necessary in inertial coordinates as is required to derive the Tsiolkovsky rocket equation.

The reason that the the OP got 48 million horsepower instead of something closer to 22 million is that while they entered the correct thrust into the Wolfram Alpha calculator link they left the $I_{sp}$ value alone, mistakenly thinking that the booster in question was a stand-alone launch vehicle instead of an SRB as was pointed out in comments:

Did you account for the SRBs having a specific impulse of only about 240 s?

If NASA's SLS Boosters Office used the simple formula above, then it means that they've used 209 seconds for Isp rather than 240 seconds. However Wikipedia says 269 seconds!

There is a discrepancy that needs further explanation. 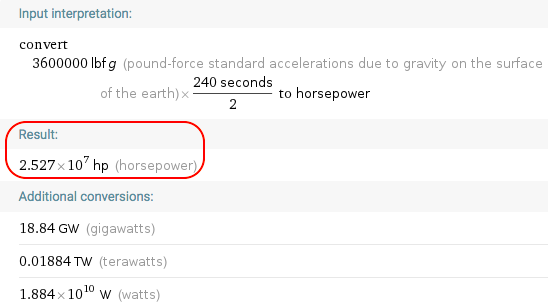 Not the answer you're looking for? Browse other questions tagged rockets physics mathematics thrust or ask your own question.

3
Does NASA really report the power of rockets in horsepower?
6
How to calculate the lowest possible altitude a satellite can orbit at due to aerodynamic heating if provided with a sufficient propulsion system?
1
What is the relation between the rocket equation and work, energy and power?

28
For a 3 booster rocket, why do they start with igniting the starboard booster, followed by the center and port?
16
Why are Europe’s Air & Space Academy and DLR urging ESA and CNES to reconsider the use of solid fuels for the proposed Ariane 6?
5
How to calculate rocket acceleration?
8
Why did NASA design the SLS do the job of both the Ares I and Ares V?
10
What was the maximum thrust of the Rocketdyne F-1 engine?
4
What is the formula to calculate how much fuel is needed for a rocket?
7
Why will SLS Block I bring less mass to LEO than the STS shuttle system did?
9
How can I calculate the delta-v correctly, this way does not seem to be correct?
0
How do you calculate thrust produced by a rocket engine?