How did astronauts frame photos without a viewfinder?

On specially built Hasselblad cameras, how did astronauts operate the camera controls with bulky gloves on, and how did they frame photos without a viewfinder?

The astronauts did a lot of training with the cameras. The used 60 mm wide angle lens (angular field diagonal 63°, side 47°) and the large image format (53 * 53 mm) helped them in framing.

The 500 mm lens had a special notch and bead viewfinder, see first image. 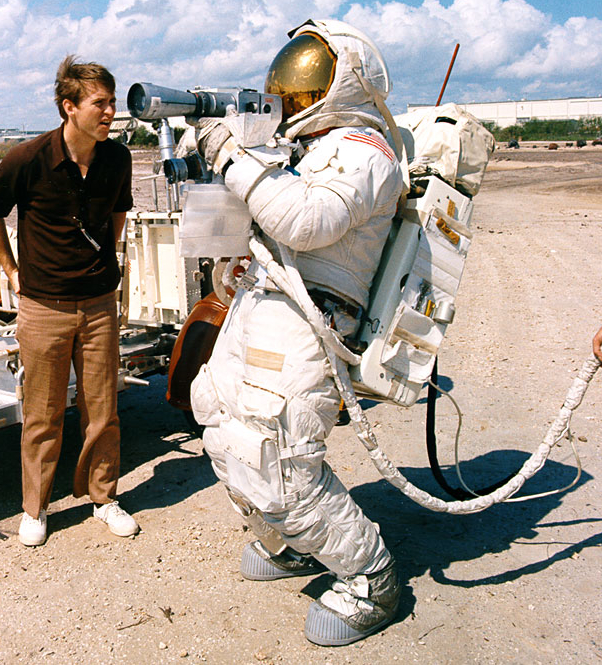 Image of a suited training from this page. 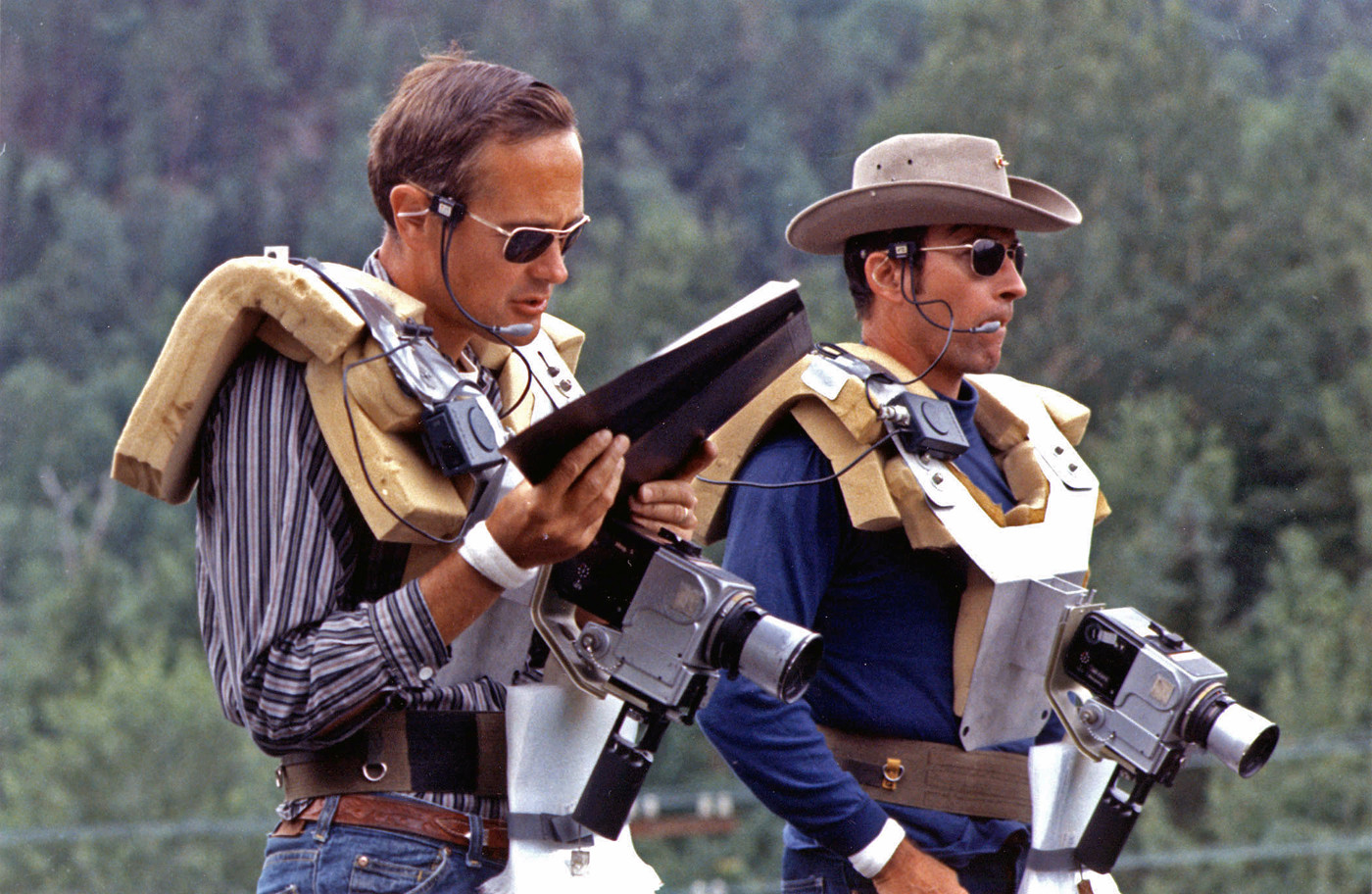 Apollo 16 geologic training-exercises in Sudbury, Ontario, Canada July 7-9 1971; Charles Duke (left) and John Young studying traverse map prepared for them during geologic traverses at Sudbury. Both astronauts have electric Hasselblad cameras, similar to the ones they would use on the Moon, mounted on their chest plates.

The Apollo astronauts underwent intensive training in preparation for their Moon explorations. Over the several years prior to the Moon missions, scientific and photographic training was provided. Astronauts were encouraged to take training cameras on trips to become more familiar with the camera operation and to enhance their photographic technique. Tutorials were provided to the crews on the equipment, its operation, as well as on the scientific purposes. The crews visited geologic sites in Nevada, Arizona, and Hawaii, frequently simulating their lunar traverse, completely outfitted with sample bags, checklists, simulated backpacks, lunar rock hammer, core-sampling equipment, and typically using Hasselblad EL cameras similar to those they would use on the Moon. As the use of the camera was mostly automated, the most crucial training was in pointing the camera which was attached to their chest control packs for the suit's environmental control system. The astronaut would point his body in order to aim the cameras. Films taken during the practice exercises were processed and returned to the crewmen who would study the results. 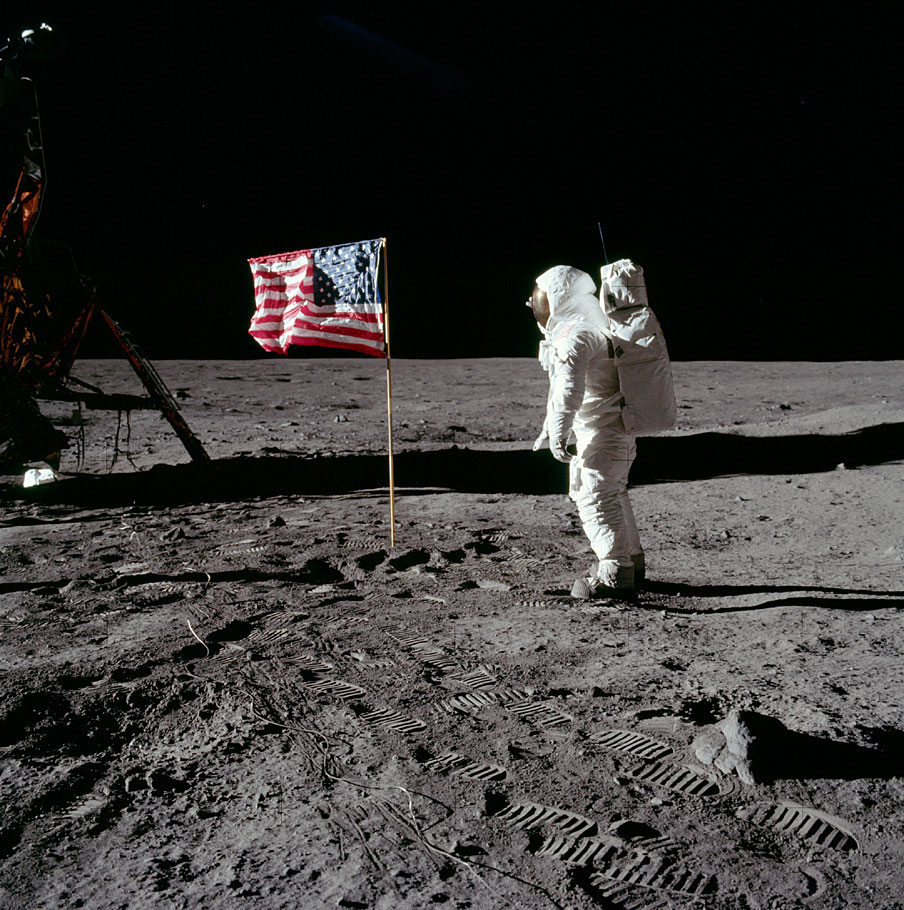 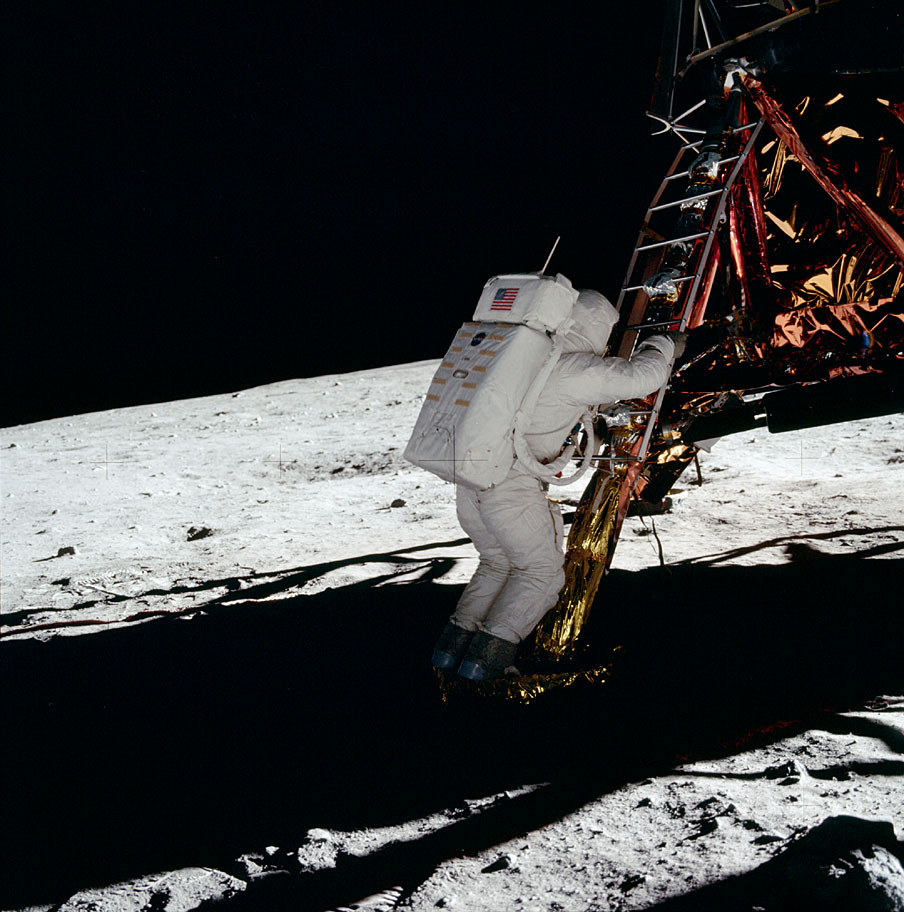 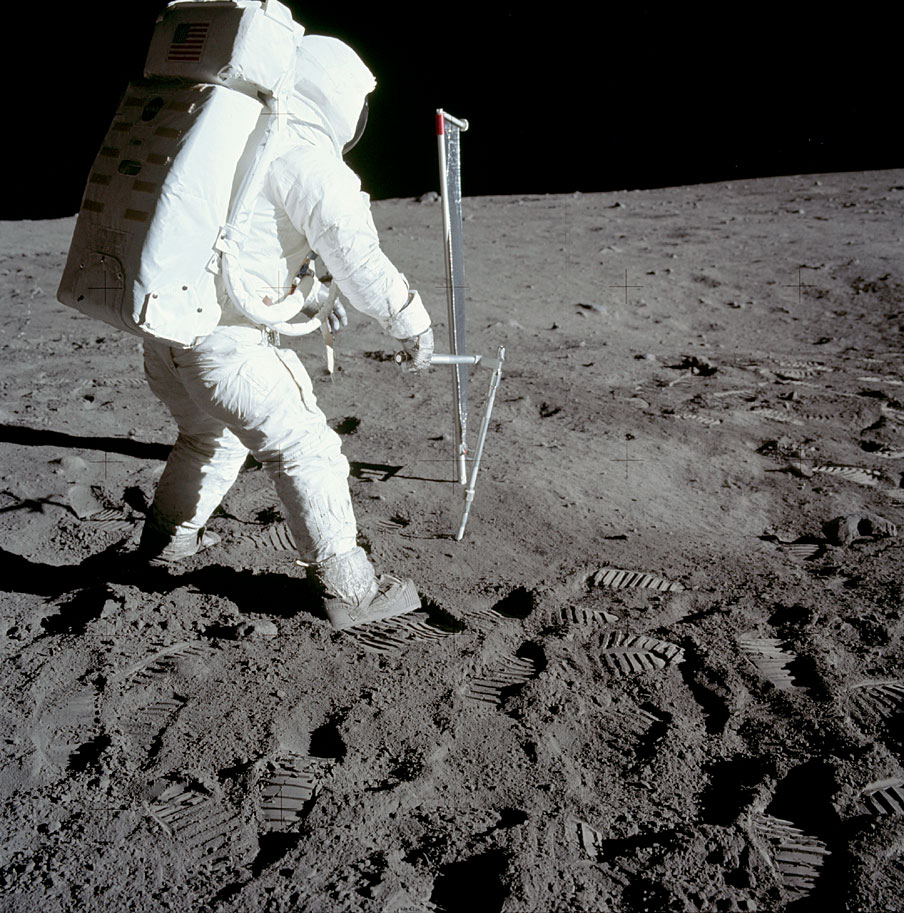 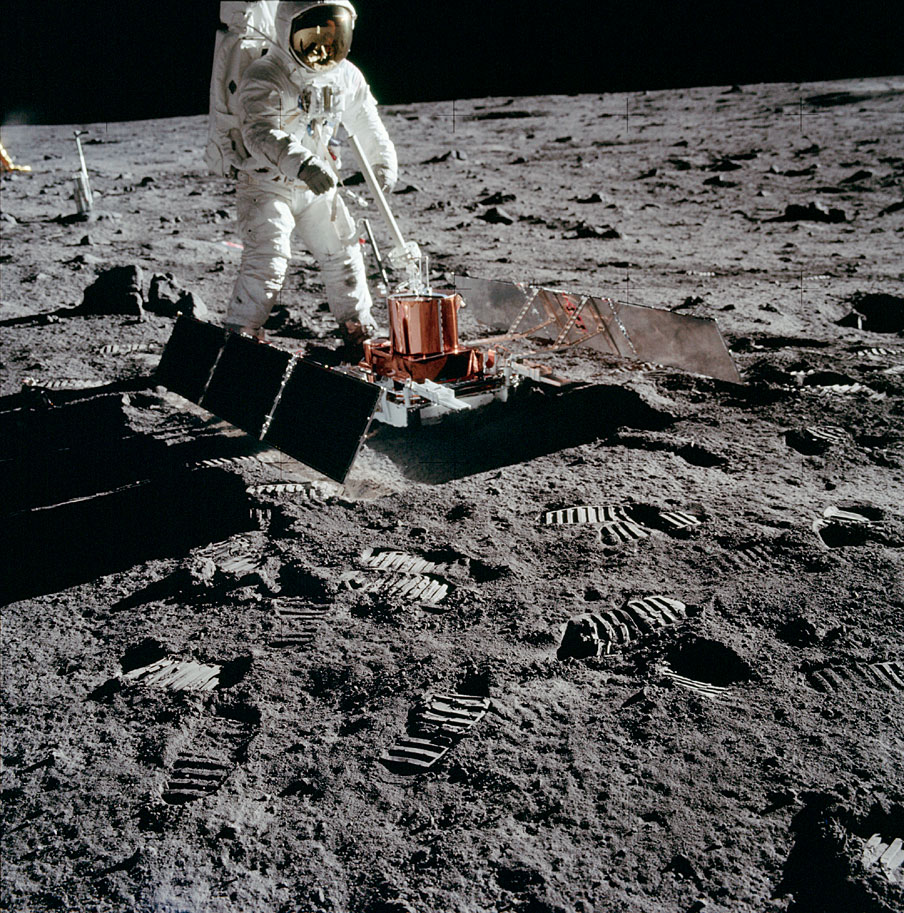 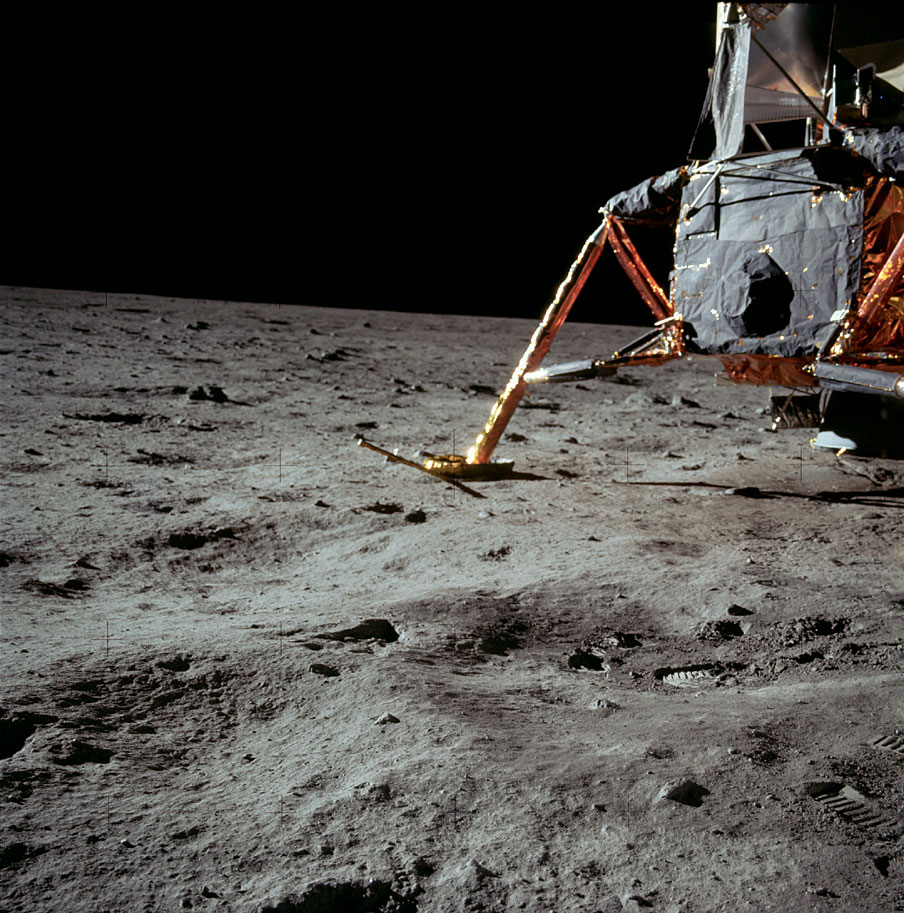 One image is nearly perfect framed, but sometimes the camera was not vertical and should be held a little higher.

Aligning all images of a panorama was not easy, see the very different vertical positions of the horizon.

But all are magnificent historical images.

The camera was modified with large levers to be used in space wearing thick pressurized gloves, see the red arrows. 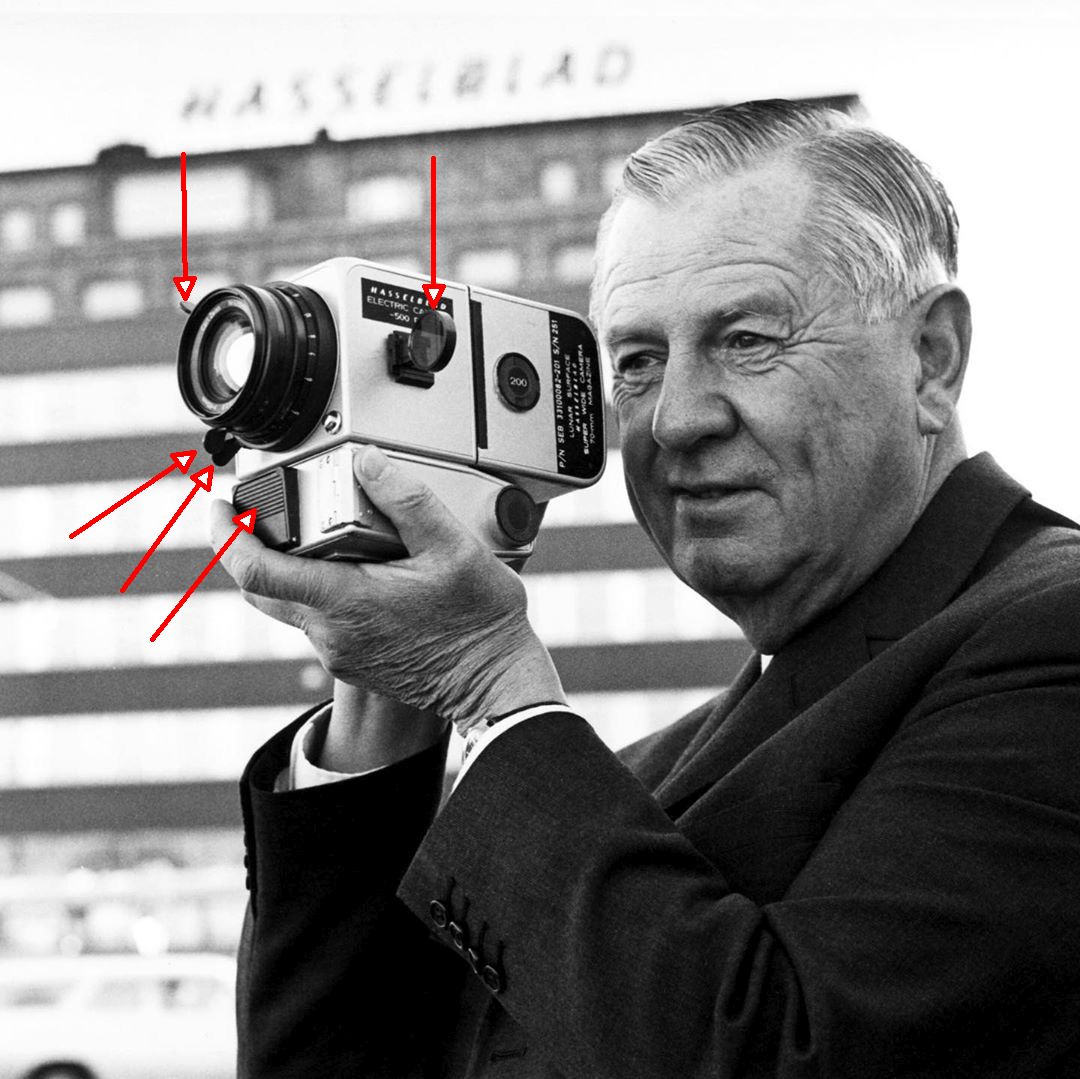 Victor Hasselblad presenting the camera with the modifications for the Apollo lunar landings.

Well framed images, such as this one 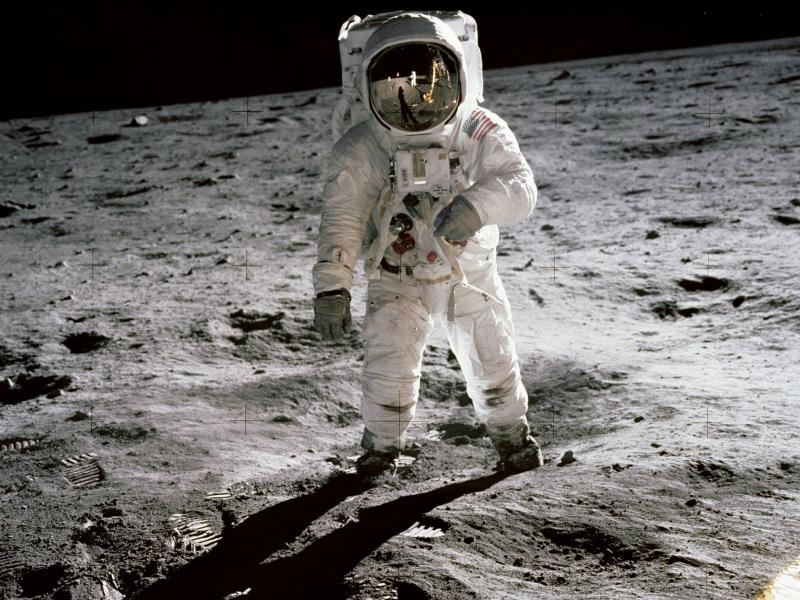 a little black border added at the top really helps (thank goodness there are no antennas sticking up, eh?) and cutting out that noisy foreground has the double benefit of leaving just a single track of footprints. But let's be honest, a more level horizon would've been much better.

And, of course, for every "reasonably" framed photo, there were some not so reasonable framed ones: come on Neil, if you're going to take a picture of someone leaving a spacecraft to step on the surface, can't you get one with both the door and the point where the "ladder" hits the ground in the same shot?

hopefully, it's no surprise that the image credit for these goes to NASA, and Neil Armstrong. I like this page, because it ties the images into the astronaut activity

And there are two other secrets in most professional photography: For one they sometimes reframe pictures before they get published. And this could be done even in good old analog time. Tilted a little - just move it when exposing the prints. Too much background - just crop the image so it fits better. And so on... And secondly: only publish the good pictures - until quite recently the huge archives were not so publicly available as they are now. You take hundrets or thousands of photos, but publish only the very best ones. And not the bad famings, bad exposures, ...

Unless I oversaw in answers already given - the manufacturer modified the controls of the camera slightly, the "rings" received levers so you could move them easy even with the thick gloves, and the usual small knob was replaced likewise by a lever that could be easier operated with gloves

@Organic Marble: the NASA site seems to slightly exaggerate - according to Hasselblad themselves the magazines at least for Apollo 11 carried a 70 mm film with a capacity of 72 pictures which was already 6 times the regular number of 12 pictures as can be found in the pdf

19
Usage of Apollo Lunar Surface Hasselblad Camera with 500 mm lens?
7
How were Apollo spacesuits cooled during simulations/rehearsals on Earth?
2
Why is a corner of InSight's selfie cropped like this?