I'm assuming each stage consists of a hollow outer cylinder made of say, aluminium, and within it a cylindrical shaped propellant which is constantly being depleted. Then there is a payload at the top in the shape of, for example, a nosecone.

Any help is appreciated!

Referring to the left side of this figure, you can see the x-center-of-mass locations of various components (tanks, engines, payload). 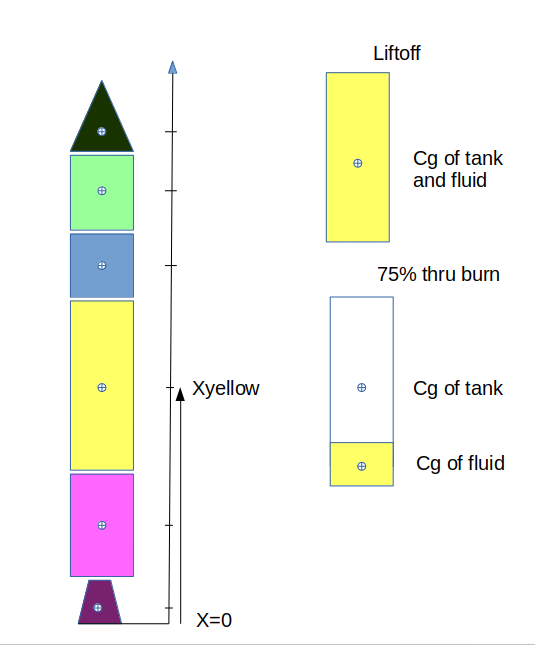 So with some totally made up numbers here is a sample calculation using the equation above for this unfueled rocket. 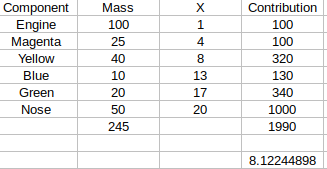 For the time-varying tank liquid masses, the same approach is used. (Refer to the right side of the diagram) Assuming the tank is totally full at liftoff, the cm's of the tank and fluid will be be the same. You can calculate the liquid mass at any time using the known flow rate of propellants to the engines. Then the cm of the fluid and the cm of the tank go into the equation as two separate components.

This is terribly simplified, ignores pressurization gas and probably a hundred other things, but my goal was to show you the basic procedure and you can build on it to make it as complex as you like.

Not the answer you're looking for? Browse other questions tagged rockets center-of-gravity or ask your own question.

20
How stable would a Falcon 9 first stage be after it has landed on a drone ship?
6
Center of mass location on any popular rocket in any typical condition?
4
Moment of Inertia of rocket
2
Center of gravity calculation for any rocket or launch vehicle

5
How to calculate rocket acceleration?
21
What is the ideal shape for a rocket?
10
A cryo tank within another cryo tank...is it a sound engineering concept?
7
How does rocket guidance deal with changing mass?
2
Rocket - calculate angle of attack to reach goal point
2
Center of gravity calculation for any rocket or launch vehicle
8
How is the CG of rocket found after the complete assembly
2
Which components do we calculate for center of pressure? Where is the distance of components while computing the cp and cg of a rocket?
4
Moment of Inertia of rocket
2
Calculating total burn time for a rocket under constant acceleration with two propellant consumption rates