So let's break down the answer into bite sized chunks...

How do you transfer a spacecraft from one solar system body to another?

There are two main things you need to do.

The second point is the key to all this. The planets orbit the sun at different rates, so you have to wait for a launch window so that the target planet will be there when you arrive.

Why are there launch windows? Why can't you just launch whenever?

If you had a torchship, you could just launch whenever. In actual modern day spaceflight, propulsion systems are not near efficient enough to get away with it. The tyranny of the rocket equation means that the spaceship's mass needs to be mostly fuel, and a small increase in the delta-v requirements means a much larger increase in the fuel you have to carry. 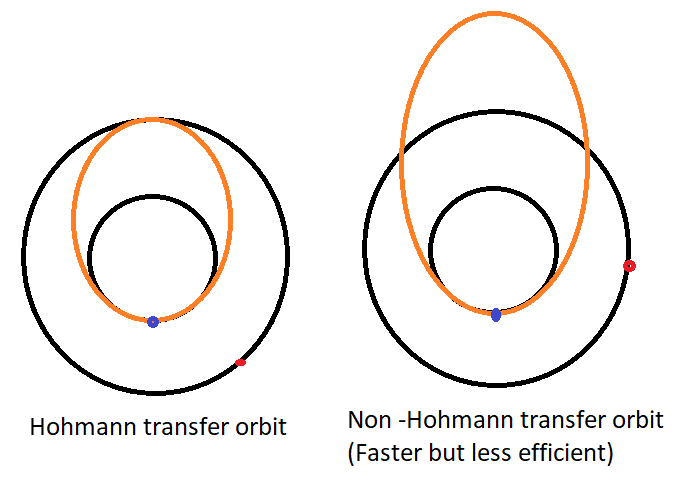 But what if you miss this launch window? Or you're impatient and want to launch now? You can still make it, but you have to expend more fuel to intercept with the target planet, and more fuel still to match velocities so you can go into orbit or land. When I play Kerbal Space Program, I often 'eyeball' these launch windows, and often find that I have to expend extra fuel to make the rendezvous work and compensate for my sloppy play.

Ok, so what are pork chop plots though?

There is often a bit of leeway built into a mission when it comes to timing, etc. Launches can be delayed or scrubbed for any number of reasons. So the mission has to be designed with some allowance for things going wrong. When planning for these eventualities, they use Pork Chop plots.

If the orbits of Earth and Mars were perfectly circular and coplanar, these plots would just look like concentric circles. But because they orbit in slightly different planes and have slightly different eccentricities, the energy requirements to reach Mars in a given timeframe change over time. This is what gives the plot it's asymmetric 'porkchopiness'.

On to the actual question. Why don't we see Earth-Moon porkchop plots?

(This part may be a bit conjecture-y. I don't know for sure, but I've arrived at an answer that makes sense to me. Please if you have a better idea, inform me).

If you think about it naively, there's no real difference between a transfer between Earth and Mars, and between Low-Earth-orbit and the Moon. You're just going from a lower orbit to a higher orbit.

But the real difference is the ability to try again. If you miss your Earth-Mars launch window, you have to wait a long time to try again. The closer the orbital periods of two bodies is, the rarer the launch windows. For earth-mars, this occurs once every 780 days. (this is called the Synodic period. Look here for other synodic periods.)

On the other hand, for the Earth-Moon transfer it only takes about 90 minutes to orbit the earth once at LEO, so if you were to miss your Launch Window, you can just try again in an hour and a half.

It's not that a porkchop plot can't be drawn, it certainly can (and with differences in LEO inclination and the Moon's inclination and eccentricity, it would have some degree of 'porkchopiness'). It's just there's not much reason to, as it doesn't really help the planning phase of the mission.

No, because the concept doesn't make much sense. The Earth-Mars configuration and Mars' eccentricity makes the cost to send a vehicle from Earth to Mars vary by a huge amount. Pork chop plots are a useful way to visualize these huge variations. The cost of sending a vehicle to the Moon on the other hand varies so little with launch time that it isn't part of the picture. The key concerns with sending something to the Moon are the time of lunar day and the position relative to the Moon correct at lunar orbit insertion.

I agree with Ingolifs' answer; you can create a porkchop plot for a transfer between any two orbits. For an Earth-Moon porkchop you could pick either a point on the Earth's surface or a particular low Earth orbit as your start. For example, here's a porkchop plot showing the delta-v required for transfer from Apollo 13's initial Earth orbit to the Moon (orbital elements from SpaceTrack catalog, orbit positions calculated using JPL Horizons) 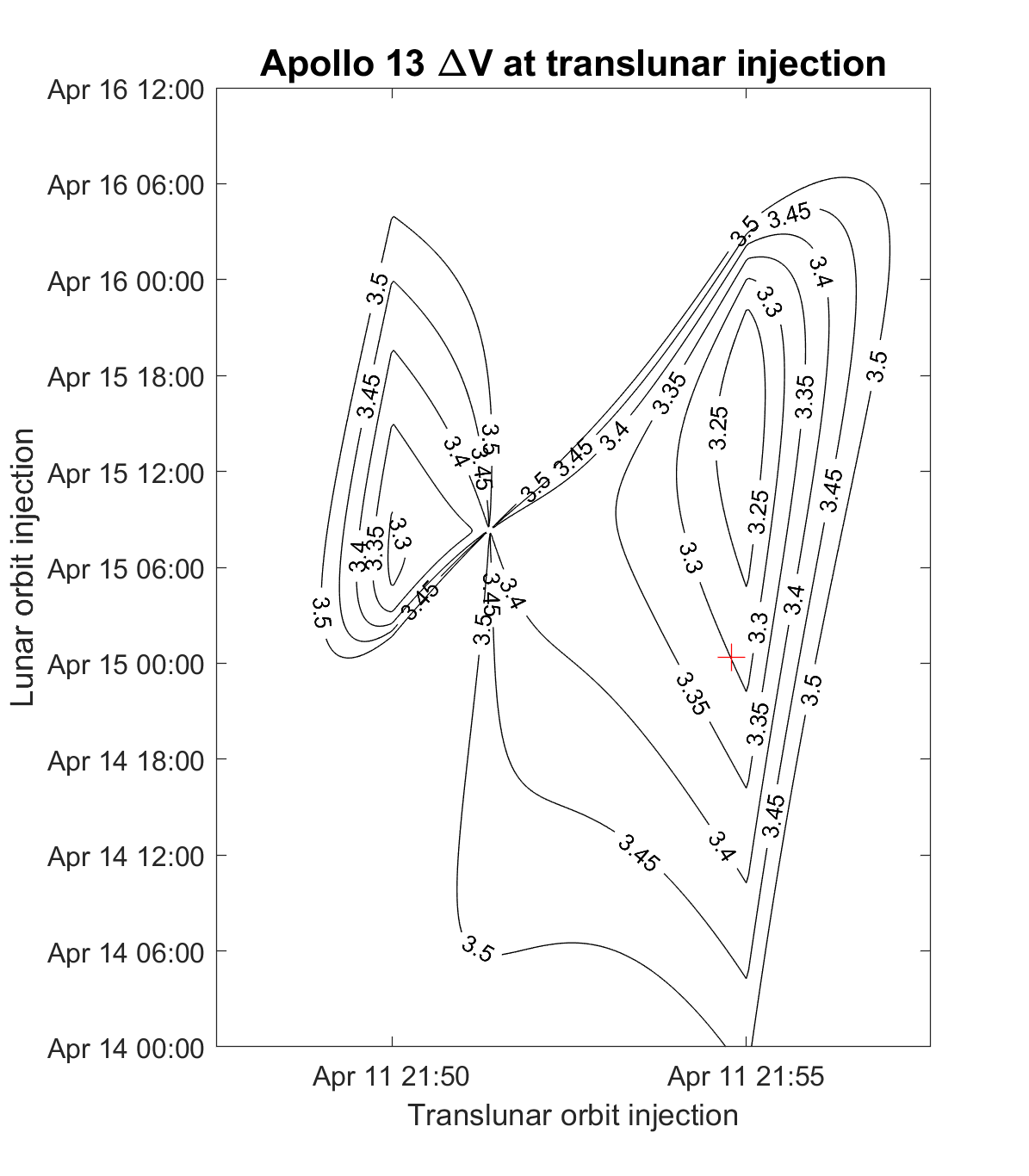 As you can see, the "porkchop" shape is due to the particular relationship between the Earth and Mars, different transfers have different shapes.

I produced an Earth-Mars porkchop using the same code which you can compare with the one on Wikipedia.

Not the answer you're looking for? Browse other questions tagged orbital-mechanics the-moon earth or ask your own question.

7
Any additional information required for colonising these rocky solar system bodies?
7
How can I look for the best date of launch for gravity assist?

1
Earth rotation confusion on Stapledon book
34
What does the Sun-Earth-Moon system look like from the Sun-Earth L-2 point?
9
What is the effect of gravity slingshots around Earth on Earth's rotation and orbit time, and is this effect worth considering?
6
Earth departure flight path angle for fast Earth-Mars transfers
5
Why does NASA Horizons say that Earth inclination is not 0 at J2000 epoch?
8
Lunar Free Return Trajectory Simulation
5
How do I calculate the characteristic energy for a rocket to near rectilinear halo orbit where the Deep Space Gateway is going to orbit the Moon?
3
Bucket loop between Earth and Moon?
1
Where do the butterflies land on this bifurcation plot? (Earth-Moon three-body butterfly orbits)