Could the Apollo astronauts distinguish Earth's continents and oceans from the moon?

Could that difference be seen by the human eye from the moon? Basically, did any Apollo astronaut, while on the moon's surface, indicate whether they could distinguish Earth's continents from oceans?

Yes, according to Mike Collins (but from lunar orbit, not on the surface).

The earth as seen from this distance - nearly a quarter of a million miles - is an unforgettable sight.

To begin with, it looks tiny, the size of your thumbnail held at arm's length. It is mostly ocean and clouds, the blue and white dominating the brownish-green of jungles, mountains and plains. The only land mass that really stands out is the North African desert, especially the oxide-rich, reddish Atlas mountains.

This is an Apollo 16 orbital picture of the CM and Earth from the LM. 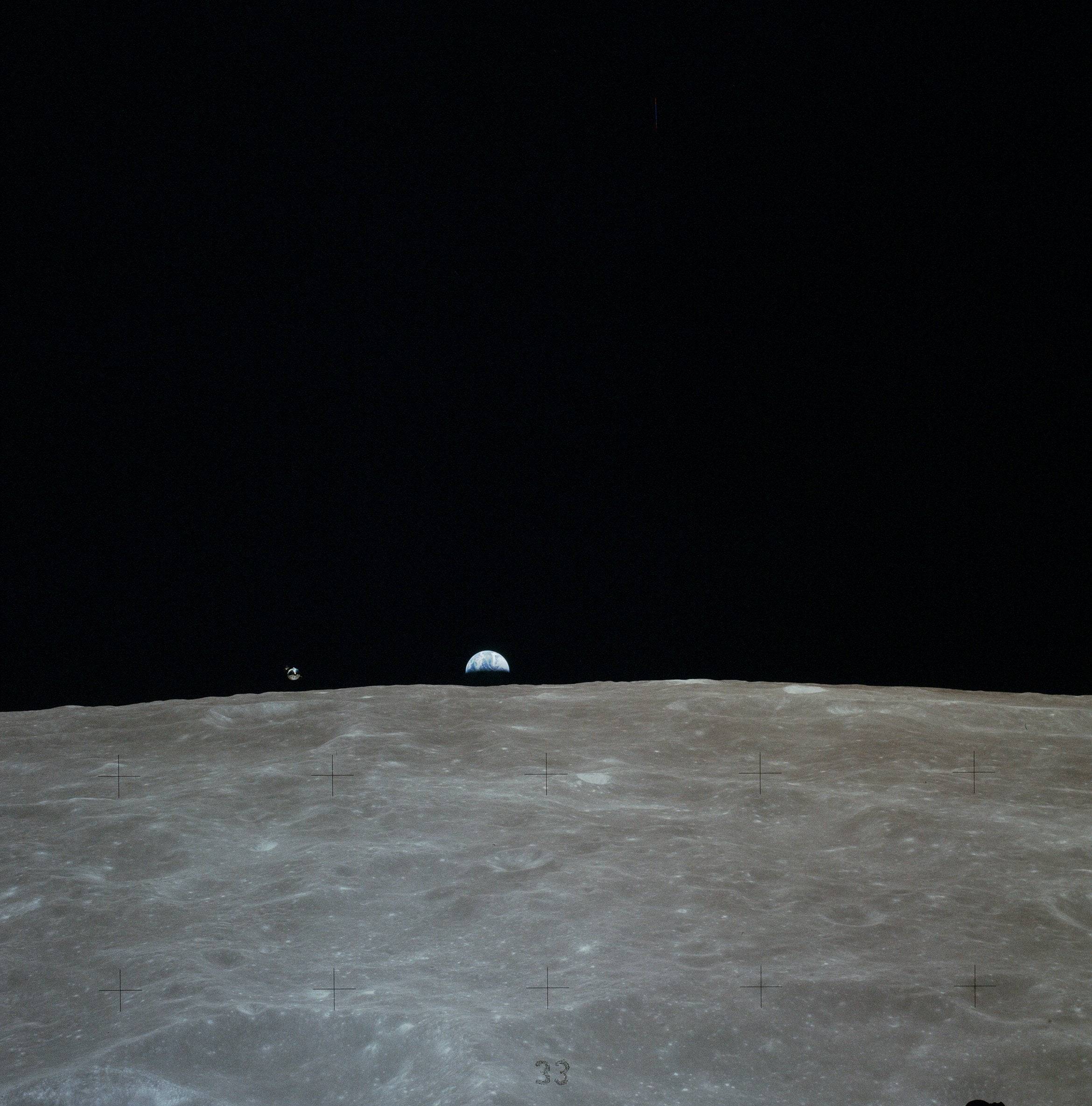 I don't know if any Apollo astronaut talked about it, but in the famous "Earthrise" photo taken from lunar orbit on Apollo 8, landmass (the west coast of Africa, I believe, at the lower edge of the sunlit portion of Earth) is distinguishable from the oceans: 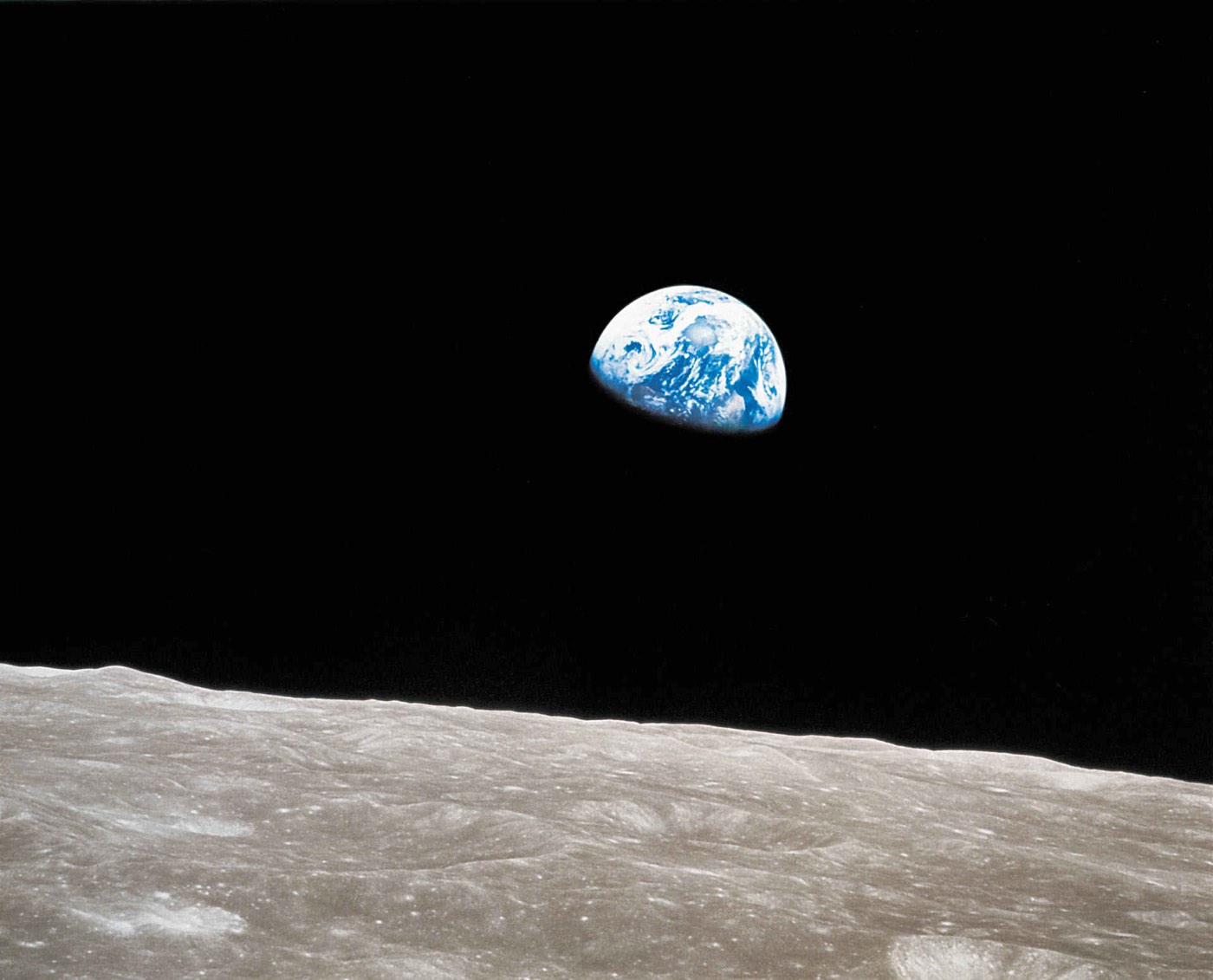 When you look up to the full Moon at night with a clear sky you are able to see many details. The astronauts looked up to the much bigger Earth at the same distance. So they were able to see much more details of Earth than we see of the Moon.

The famous Earthrise photo was taken with a 250 mm telephoto lens, not with the 80 mm standard lens. It does not show a view similar to the naked eye view. 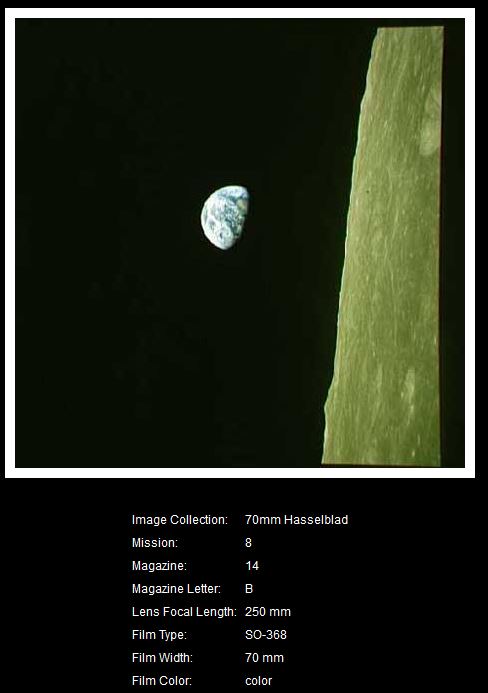 Taken with a 80 mm standard lens it would look like this.

Not the answer you're looking for? Browse other questions tagged the-moon apollo-program astronauts earth or ask your own question.

13
At what minimum distance does the Earth appear star-like to the naked eye?

11
Could Earth-lunar flybys be repeated consecutively without the use of propellant?
19
Apollo communication between the Earth and Moon
2
Ephemeris for lunar body-centered body-fixed coordinates?
8
Could you launch rocks from the Moon to hit Earth?
8
Has the Earth's shadow on the Moon (lunar eclipse) ever been photographed from Space?
3
What Apollo equipment could be salvaged from the Moon?
6
Did Apollo-11 astronauts rehearse their photoshoots on Earth?
28
Could Apollo astronauts see city lights from the moon?
6
Why is the Duration of Time spent in the Dayside greater than that of the Night side of the Moon for Chandrayaan-2 Orbiter?